SYNOPSIS: Father vs. son round two! Batman and Damian Wayne are once again butting heads after Bruce uncovers the missing Black Casebook pages in the clutches of his estranged son. But when the notorious Hush captures the entire Bat-Family, the Dark Knight and the former Boy Wonder must put aside their differences to help Nightwing, Batgirl, Signal, Orphan, Red Hood, and Batwoman survive! 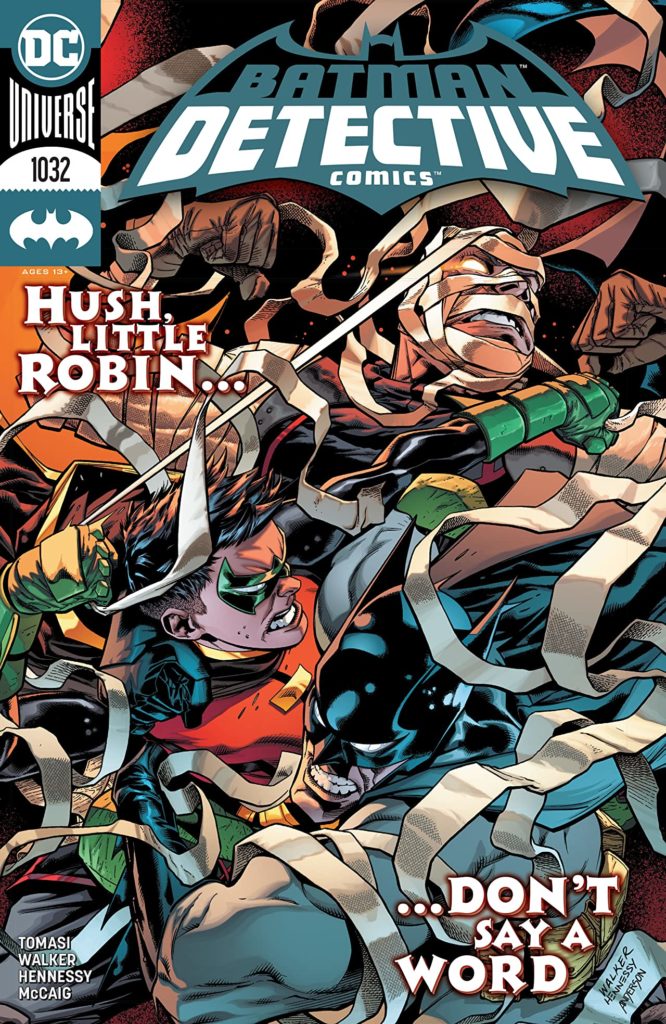 The dynamic duo is back!

No, not Batman and Robin, but Tomasi and Walker!   This has been the one-two punch that has been the most enjoyable on Detective.   Tomasi brings back a villain who has been radio silent since Rebirth in Hush.  Doing so in the most sadistic black-market way possible. While we have had other artists like Doug Mahnke, Kenneth Rocafort, Nicola Scott, and most recently Bliquis Evely leave their mark on Detective. There is just something special about Walker and his style of art that truly stands out.  It’s how he draws facial expressions, his panel placement and how can you not love the best Bat-chin ever drawn on the page?

It’s been a while since we have seen Hush pop up in a Batman title.  He makes a jaw-dropping cameo last issue and now we see his master plan unfold.  Hush very much like Batman has still not gotten over his childhood.   While it was a painful trauma that caused the Dark Knight to begin his crusade for justice, it was the lack of such trauma that has caused Hush to continually seek revenge on the Wayne name.  Hush is exacting his revenge in the most Hush way possible since 2008’s HEART OF HUSH.

The part of the book where Tomasi is at his best is the relationship between Batman and Damian.  Just like I was while reading the last issue, Batman is very impressed with how “Batman” like his son has become. From using technology to hide his heat signature to still mourning the loss of their father figure in Alfred, the apple doesn’t fall far from the tree.  You feel the tension between the two as soon as Damian flies into the story.  Batman is focused on trying to reclaim their relationship while Damian is still full of angst and rage.  Damian is not holding back while Batman will not strike his son but will counter with some “tough love”.

While the return of Hush will have fans drooling and Batman/Damien will hit you in the feels, the most interesting part of the book goes to mayoral candidate Chris Nakano.  In only four pages we learn that Nakano is the most righteous character in Gotham since Harvey Dent.  He will not let anyone influence his motives or beliefs.  He very well might be Gotham’s white knight.

Brad Walker makes his return to Detective Comics since we last saw him in the anniversary issue #1027 and I welcome him with open arms.  As I mentioned earlier Walker’s facial expressions really stand.  The vindictive look on Hush as he torments the Bat-Family, Nightwing’s stern look as he can only helplessly watch in silence while bound to an operating table.   Even characters like Red Hood and Cassandra Cain, you can read them like a book through their face covered mask.  It’s how Walker draws the eyes, doesn’t matter if you can see their pupils or if they have the typical white eye slits.  The angles of the top of the eye speak volumes of the emotions running through their veins.

Walker’s Batman is nothing short of stunning, constantly crouching and scowling while covered in darkness.  This is how Batman should always look!  This is not an action-packed book but the fight scene between father and son moves so fluidly.  Walker is a master of making the most of his action panels, using an array of trapezoids during the fight scene.   This stands out from the rest of the book because those are more traditional squares and rectangles. The trapezoid and hard angles seem to add the element of speed to the fight.  It’s like your eyes are playing an amazing trick on you that points you in the right direction, adding some sleek depth to the book.

Detective Comics #1032 brings back Hush in a big way!  Can he corner Batman into sacrificing the life of a civilian for a member of the Bat-family or vice versa?  This issue doesn’t have the strong political elements of the last two, but it does develop the Chris Nakano character.  Walker’s artwork is just as wonderful as ever.  It’s honestly hard to pick your favorite part of the book.  The splash pages are bold and beautiful, the action couldn’t be easier to follow with his creative panel placement, and as always with Walker, the emotion bleeds off the page.  We have one more issue with Tomasi at the helm before “Future State” takes over for two months and then it’s a new creative team.  Can’t wait to see how this one ends! – Peter Verra

Pattinson on Playing Batman: When People Doubt You, It’s Quite Galvanizing