SYNOPSIS: On the eve of some of the biggest changes ever in Gotham City, Batman finds himself at a crossroads with the people of the city he has sworn to protect. A landslide victory for anti-vigilante mayoral candidate Christopher Nakano is bringing with it new legislation to outlaw the Bat-Family’s very way of life — and with his rogues gallery still knocking on his door, Bruce will need to make some tough decisions about the future… 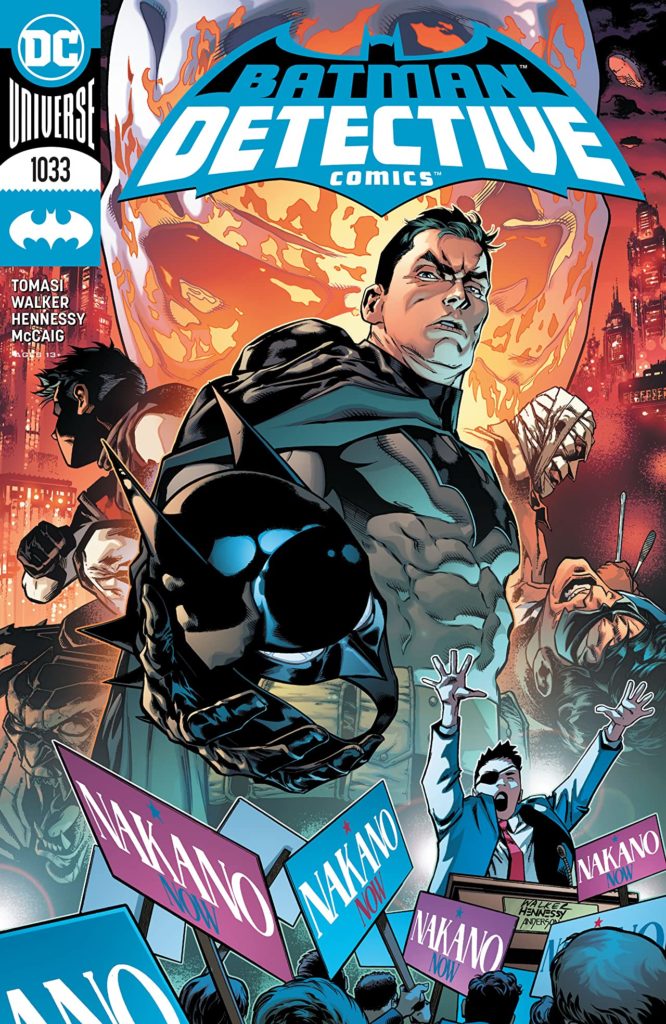 This is the end of the line.

This is also the final issue for artist Brad Walker, who has delivered thirteen of the most beautiful issues you will ever lay your eyes on.

The title will also bid farewell to writer Peter J. Tomasi who jumped on board back in issue #994.  Tomasi has written one of the most enjoyable runs on Detective dating back to before the “New 52” relaunch in 2011.

Tomasi and an arsenal of artists including Doug Mahnke, Kyle Hotz, Christian Duce, Kenneth Rocafort, Nicola Scott, Bilqueis Evely and others have done some incredible work. Two huge anniversary issues in Detective Comics #1000 and #1027 are the big headliners.  I would argue when Tomasi was writing the classic villains he was at his best.  Issue #1008, a standalone issue with Batman taking on the Joker, could very well be the finest issue of the run.  While the arc with Mr. Freeze (#1009, #1012-1017) added a new Bonnie and Clyde aspect to Victor and Nora’s relationship.  You cannot overlook the two issues in #1010-1011, featuring Deadshot, that felt like Batman meets Cast Away.  Tomasi rejuvenated Two-Face with a Waco Texas cult angle debuting the Church of Two in issues #1020-1023.  You also have to behold The Brave and The Bold vibe presented in issues #1006-1007 when The Dark Knight and the Spectre teamed up. Each storyline is wonderful in its own way.

Issue #1033 is a prime example of Tomasi’s run at its best.  Featuring a modern classic villain in Hush and the relationship between Bruce and Damian.  The heart of this story is family, as Hush tries to use the Batfamily to break Batman while Batman is trying to win back his son.  Batman’s opening monologue is touching. Hearing Bruce talk about having his son by his side once more is truly heartwarming.  In two pages, Tomasi really nails the family angle in this book.  Not just father and son, but a father and his children.  Hush tried to take down Batman where it would hurt him the most and nothing enraged Batman more.   In these last two issues, we have seen Batman show more emotion than we ever have before.  These two characters perfectly complement each other, another magnificent move by Tomasi.  Hush is a character who wanted nothing more than to destroy his own family while Batman is a character who has done nothing but fight to regain the family that was taken from him in Crime Alley.

The victory is bittersweet as Damian makes it clear all is not forgiven and he seems ready to move on.  So while Batman did manage to save his family, it did end up with the heartbreaking loss of his son.  Sure no one died and no one was physically hurt, but the emotional trauma was impactful.  Even with winning, there is still loss for Batman —  perhaps even the ultimate loss.

The issue does have some loose ends.  Where is The Mirror in all of this?  After building up the character and using him to enrage the citizens of Gotham he is nowhere to be found.   This makes me wonder if Tomasi did not actually get a chance to finish his story before Future State takes over DC comics in the new year.  The Chris Nakano arc comes to a conclusion as well and Nakano questions his future as much as the reader does, “What do I do now?” Will this be a storyline carried into Future State or even into Infinite Frontier?  I feel like Bruce Wayne in Batman Forever, “It just raises too many questions.”

Brad Walker goes out with a bang!  This is one of the better issues out of the thirteen he has blessed us with.  What stands out from page one is how Walker overlays flashbacks with the current action.   You get teased with this style early on, then he takes it to the next level during the fight with Hush.  One image is perfectly placed on top of another, never once do the images in the background interfere with those in the foreground.   Every time I open a Brad Walker book I find something new and interesting about his artwork and how he truly does visually stimulate your eye.

The action panels are wonderful, seeing Batman and “Robin” search, rescue and fight is a sight to behold.  The action is easy to follow and fluid from the point of entry to the final blow, nothing short of glorious.  When Batman takes off the cape and gloves and starts going at Hush bare-knuckle, there will not be a fan without a huge grin on their face.  All of the Walker trademarks are present in this issue; the creative panel placement and those facial expressions that bleed emotion.  From the look of question and concern on Nakano’s face, Hush and his ferocious look of anger to the heart-melting looks of sorrow and despair on both Bruce and Damian.  Walker is a class act and I have fallen in love with his artwork.

Tomasi’s run in Detective will be talked about by fans for a long time.  It will age gracefully as we get further and further out, as readers collect trade paperbacks. Reading about a Batman who at times ditched the gadgets and utility belt and went back to the basics with hardnosed detective work, adding the classic feel to this title that fans have been missing for some time.  Revitalizing some of the most beloved villains while adding little things along the way, leaving his mark.  Tomasi is a true legend in the game and the only question you can have after reading this run is…

Do you prefer Tomasi’s Detective Comics or his Batman and Robin?  Let the great debate begin! – Peter Verra