SYNOPSIS: DC Future State may be over-but the present looks tense! With the loss of his fortune and manor, the election of Mayor Nakano, and the growing anti-vigilante sentiment in Gotham, Bruce Wayne must rethink how to be Batman…or risk being left behind by his own city. To make matters worse, a catastrophic crime wave has taken hold of the city, culminating in a murder mystery that hits close to home-the suspects mount, the clues multiply, and the trail of bodies hasn’t ended yet! Eisner Award-winning writer Mariko Tamaki and superstar artist Dan Mora begin an exciting, surprising, and death-defying new chapter of Detective Comics.  Plus, in the second and concluding chapter of “Demon or Detective,” Damian Wayne meets a startling new faction from his family’s checkered past…but what is the League of Lazarus? 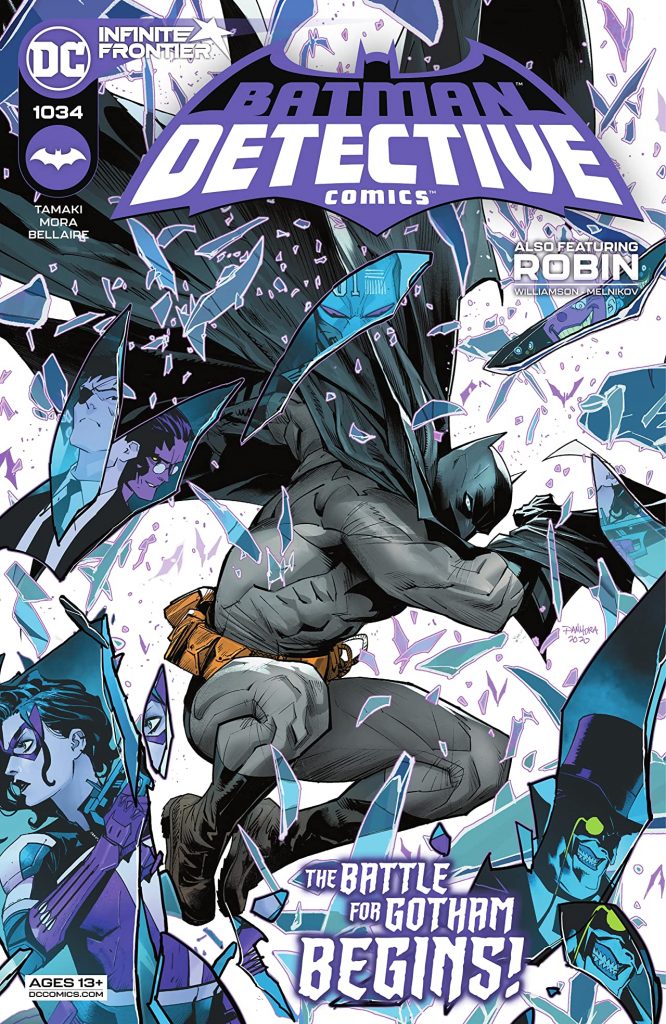 Welcome back, old friend!  It has been a little over two months since we last had an issue of Detective Comics in our hands.  Taking us on our new journey are the new kids on the block from Dark Detective writer Mariko Tamaki and artist Dan Mora.  This creative team delivered arguably the best series from DC Future State and now have bylines on one of the OG (see what I did there? LOL) DC titles. So let’s get right into it!

Tamaki is very impressive in this issue.  She picks right up where DC left off before Future State in the wake of Joker War, Peter Tomasi’s run, and doesn’t miss a beat in setting up her Future State title.  Mayor Nakano is still trying to clean up Gotham and its vigilante problem while Bruce Wayne is adjusting to his new financial situation.   Tamaki does an excellent job balancing Batman and Bruce Wayne.  She shows us how both of them are adapting to their new social status within Gotham.  Batman is operating underground now in a TMNT fashion; small scattered Batcave’s around the city while popping out of manholes.   Bruce Wayne now has to deal with actual next-door neighbors for the first time.  Bruce is living in an uppity Brooklyn brownstone section of Gotham with eyes all around him.

The reader will find it fascinating to get this in-depth look at Bruce Wayne in this new environment.  We got a glimpse of a down on his luck Wayne in Dark Detective, but this is even more distinctive than that.  Here he is more like a Sex and the City Bruce Wayne.  A Bruce Wayne who has to attend Mayoral banquets and rooftop meet and greets with his neighbors.  It has been so long since Bruce Wayne has gotten this much attention in a book.  While Batman is why we all fell in love with this character, one cannot understate the importance of the Bruce Wayne persona.

If you skipped out on Dark Detective and this is your first time looking at Dan Mora’s artwork, you missed out.  Those Dark Detective books are beyond gorgeous and worth buying for just art alone.  Mora utilizes every inch of page space filled with unique panel placement and detail.  Using specific panels as a “magnifying glass” so you don’t miss something specific as well as guiding the reader with the action.  No one lays a book out like Mora; his style has become one of my favorites since I started to review his work.  Mora does not present your typical nine-panel grid comic book. Splash pages integrated with panels in the shape of broken glass and squares of all sizes.  Not one page looks the same, and they all stand out.

Those of you who like me have been dying to see what Mora’s actual Batman would look like; you are in for a real treat.  A window crashing, cape flowing glorious treat.  It’s not just Batman making grand entrances; it’s everyone.  Mora takes the phrase go big or go home seriously, and it shows in his work.  The banquet scene is an excellent easy to follow action-packed heist.  You get screaming nervous attendees, bodyguards scrambling, bullets flying, Batarangs zipping through the air.  It’s just magnificent in every possible Batman way.  I got vibes of the Fugitive banquet scene mixed with the Box launch party from Batman Forever.

Detective #1034 is an outstanding hint of what is coming.  Tamaki has crafted a real attention-grabbing mystery story while weaving in essential elements for Batman and Bruce Wayne.  Bruce Wayne is out of the mansion and into the heart of the city to be a man of the people.  Not only is Batman dealing with the social outcasts of society, but Bruce Wayne is dealing with being the socially awkward person at a block party.  Combine that with the artistic genius of Mora, who blends action and emotion with the best of them and you have yourself one entertaining comic book.  This issue is one comic you need on your pull list.  This dynamic duo keeps the momentum going and has all the makings of a very good run that has only just begun. – Peter Verra