SYNOPSIS: In the main story, Mayor Nakano green-lights the Magistrate pilot program for Gotham City as Batman goes toe-to-toe with the augmented and bloodthirsty Peacekeeper-01! It’s a brutal battle for the ages, but what secrets does Harley Quinn hold about the man beneath the armor, Sean Mahoney? And how does this all play into the Scarecrow’s hands?!  And in the backup, Ghost-Maker is fighting through incredible odds to reach the nefarious Madame Midas…but will his next opponent-BRAINSTORM-be impossible to overcome?! 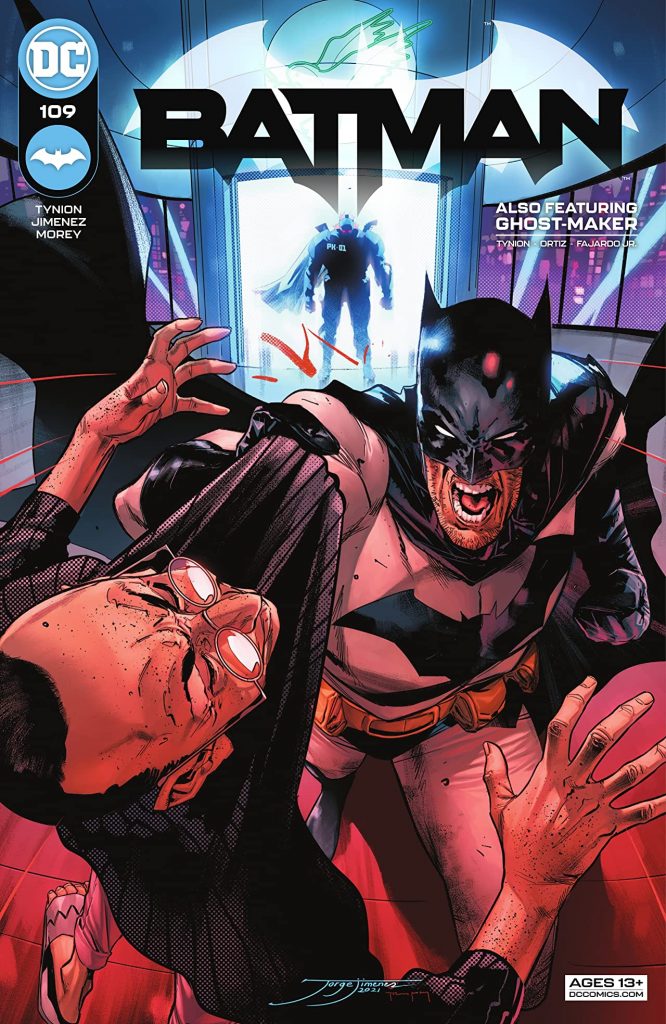 BATMAN #109 kicks off the month of June better than the last issue kicked off May, but it’s not a complete turnaround.

The road to FUTURE STATE continues as Batman tracks down and confronts Simon Saint in his tower. As this arc has shown, Saint is the one behind the Magistrate initiative and has finally perfected his first Peacekeeper, who confronts our hero by issue’s end. Jonathan Crane’s Scarecrow is also factoring into the equation, but should be prepared for a double-cross.

This issue flows better than the last, but I’ll admit I’m annoyed. Writer James Tynion IV falls into habits of his own, and they’re usually ones that bug me. It’s no different here. For the fourth consecutive month, we’ve opened up our story with Batman under a hallucination from Crane, but it’s more tiresome than thrilling. Each chapter of this arc starts with this scene and isn’t really providing anything other than (another Tynion habit) “we’ll get to this later!”. At first, this felt effective but we’re no further along with it now than when it began 3 months ago.

Another instant eye-roll/annoyance was the inclusion of Ghost-Maker. He served no purpose here except a side mission with Harley Quinn to…..umm…show off his out-of-nowhere headquarters that he says is better than Batman’s? A MAJOR bugaboo of mine is to talk down one character to try and boost another. It never sits well with me, and is worse here because he’s talking down about Batman….IN A BATMAN BOOK. Plus, we get ANOTHER new character (Tynion habit) who was teased a few issues back (Tynion habit) and is teasing something yet to come (Tynion habit) that is all completely unrelated to Batman, in a BATMAN book. And the kicker? IT’S 9 PAGES OF A 23-PAGE BATMAN BOOK.

On a positive note, the issue ends in a cool fight that has me looking forward to the next issue.  Another positive note is that artist Jorge Jimenez does a great job illustrating here. It pained me last month to give a negative review and I’m happy to see his panels stand out once again, matching the energy and enthusiasm this guy has for the character.

Overall, this was an improvement but not up to the expectations I have for this book. I dig other stories that Tynion does, but I don’t think he’s a good fit for BATMAN. He spends too much time focusing on and forcing other characters while teasing the future.

If this is what the future holds, I’m happy to live in the past. – Ryan Lower