SYNOPSIS: Looks like someone brought a Batarang to a bazooka fight! As the explosive battle royal between Batman and Mr. Worth roars to a climax, Huntress is on the trail of the other major threat plaguing Gotham City: violence parasite Vile! By the end of this battle, one character will be dead, one avenged, and even more holding on for dear life! 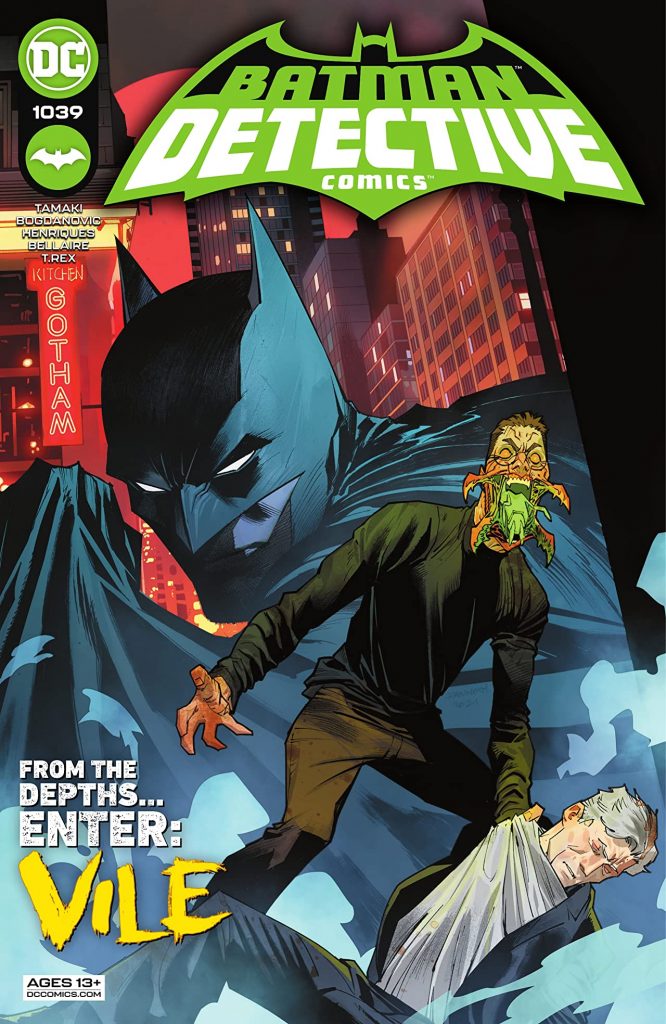 Previous issues gave the reader all the makings of a classic murder mystery with Bruce Wayne as the prime suspect. For the first time in her run, Tamaki goes complete science fiction. Both the primary and backup stories plunge into the back story of Gotham’s latest villain. Things are getting crazier and crazier in Gotham City, and what is a Batman to do?

I was not expecting this type of story from Tamaki after the first few issues. Starting with what seemed like a grounded, down-to-earth Bruce Wayne tale, she turned that on its head. Producing an Alien meets Invasion of the Body Snatchers sci-fi extravaganza. The story itself is on par with the previous entries of the run. We learn in-depth who Gotham is now dealing with, Hue Vile, the latest mad man in town.  Tamaki is on point with the classic characterization of Batman and Oracle, but at times it did feel repetitive, as Batman and Worth again come to blows. Tamaki moves the story along as we learn about Hue Vile’s plans and how he manipulated the mayor’s office from the inside. The reader will find this the most exciting part of the book. Vile has been able to go from town to town “feeding,” but can’t stay away from his favorite diner, Gotham City. While Vile might be a bit more sci-fi than I want in a Batman story, I do find him very interesting, nonetheless. Tamaki ends the book with a cliffhanger that will leave the reader drooling for the next issue.

Viktor Bogdanovic once again graces the pages of Detective Comics, and it seems to be his job to lose at this point. Bogdanovic’s Batman is a broad-shouldered brute, a true force of nature. In previous issues, I’ve compared Bogdanovic to Greg Capullo, but here I’m getting some Frank Miller vibes. Bogdanovic excels at the horror elements of the book. You can see the inspiration of the Predator or even Blade 2’s Nomack in Hue Vile. Bogdanovic works magic on Vile, making the character look utterly harmless or like something out of your nightmares. I like the range displayed in this issue by Bogdanovic, panel to panel showing off the ability to effortlessly go from action to horror. I’ve said it before, and I’ll repeat it with the quality of art coming from Bogdanovic. I don’t miss Dan Mora. Bogdanovic is even getting more creative with his panel placement and page layouts.

The backup story is written and illustrated by T. Rex. Rex gives the reader an even more in-depth look at Hue Vile than Tamaki did in the main story. We see more of his childhood and what brought him to Gotham. The story is a bit better than the art here, while Rex brings it with the words his art is not my cup of tea. If I had to compare Rex to someone, it would be Seth Fisher, who you might know from Batman: Snow, collecting Batman: Legends of the Dark Knight vol 1 #192-196.

While not my favorite of Tamaki’s run, this is still a worthy issue. The murder of Worth’s daughter is not the focal point for the first time in this arc. That is not a negative as we learn the who and why behind the murder. Tamaki leaves the reader with questions and cliffhangers going into the next issue. At the same time, the sci-fi elements are a bit much for my taste. The touches of horror do make up for it as the story progresses.

Once again, Detective delivers a solid primary and backup story making this book worth your hard-earned cash. – Peter Verra