SYNOPSIS: Damian Wayne versus his grandfather, the immortal Ra’s al Ghul! For years, Batman’s son avoided learning the ways of the Demon from Ra’s, but now that training may be exactly what Robin needs to win the League of Lazarus tournament. Plus, Ravager follows the mysterious Respawn into the secrets of Lazarus Island! 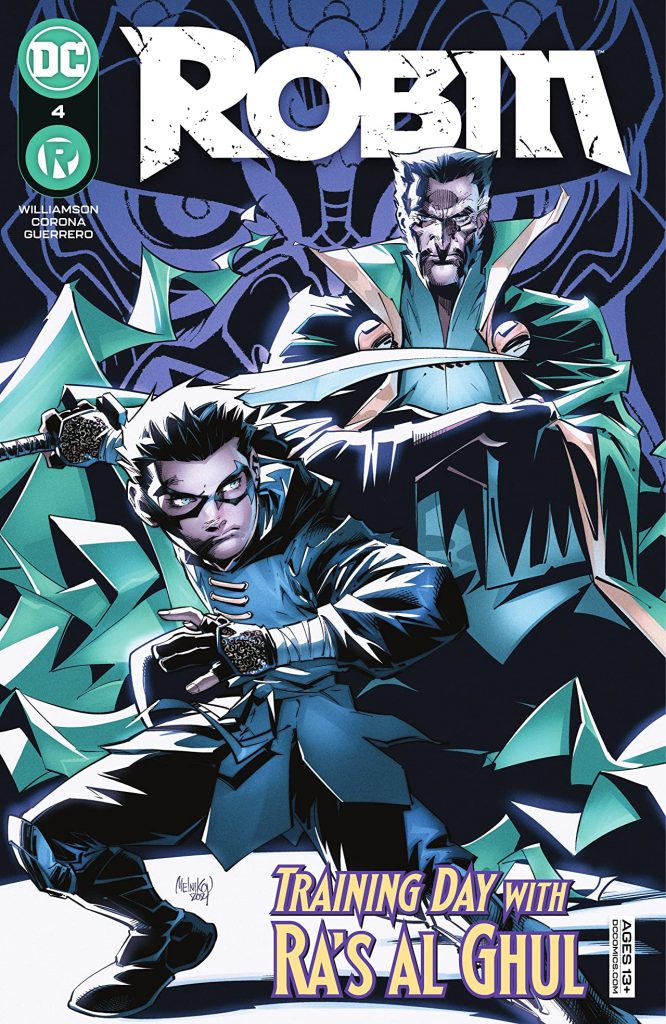 Having suffered defeat against Connor Hawke, Damian awakens on the beach under the watchful gaze of his old friend, Goliath! The furry beast is not alone as Ra’s is there, too! However, this isn’t a side of Ra’s I’ve seen before!

After his most recent encounter with Batman & The Outsiders (where he got trounced by Black Lightning), he’s resorted to becoming a beach bum as he licks his wounds, or what he calls, “reflecting on his losses and learning from them”. As the story progresses, it felt odd to see Ra’s in this light. While he certainly seems the type to examine his failures and learn from them, the braided, long-haired zen master he is not.

Furthermore, and maybe this is me getting too many continuities twisted in my brain, but seeing him being paternal with Damian is just weird. Damian, for his part, is rightly cautious. Wouldn’t you be if your grandfather tried to supplant your consciousness so he could be resurrected in your own body? The beach scenes come off similar to “Ducard” training Bruce Wayne in Batman Begins, but I kept waiting for some malevolent ulterior motive to come shining through, but it really didn’t. Instead, Ra’s is impressed by his young grandson, seeing him as greater than Demon or Detective.

Back on Lazarus island, Ravager is continuing her search for Damian, but runs into Respawn instead, who is in the middle of a fight. She senses someone familiar under the mask, but I am as puzzled as she is. The only clue Williamson leaves is that they haven’t met Slade Wilson. That doesn’t really narrow it down for me.

Ravager manages to send off a message to the outside world before Respawn kills her. As she was the last to die, the tournament can now begin in earnest. It’s about time, too. I’m getting antsy for it to start after being teased over the course of these four issues.

Damian is getting antsy, too, but runs into a further complication by issue’s end. Something tells me we aren’t going to get to see much of the tournament next issue…

The art caught me off guard this time. For the first four pages, I didn’t realize that Melnikov wasn’t the artist! It wasn’t until the bottom of page four that something looked different about Damian’s face and I scrolled up and saw the credit box. Jorge Corona’s style is a perfect fit with Melnikov’s. He brings much the same energy, complete with a sense of whimsy (check out Goliath scarring the fish). Guerrero’s colors complement the art nicely, depicting a lush island life with beautiful sunsets and starry night skies.

Storywise, this felt a bit like filler as an injured Damian gets trained by his grandfather, who brings the lad no closer to the answers he seeks. While the last issue could also be marked as such for those impatient to get to the main fights, the characterization and interaction with Connor Hawke shone through, making it time well spent. As stated above, Ra’s outlook just didn’t quite feel as authentic to me and had me wondering why we spent the time meandering on another secret island.

It is worth noting that the ghost of Alfred did not appear to Daman when he was with Ra’s. Did being around his grandfather render Damian more impertinent and overconfident? Damian tends to be more emotionally vulnerable and honest when he’s in The Spectre’s presence and with Ra’s around it felt like his guard was up. Damian continues to be more comfortable with his father’s side of the family.

While I would certainly not call this a bad issue by any stretch, it certainly is the weakest so far in the fledgling series, with the depiction of Ra’s al Ghul a sticking point for me. There seem to be a lot of guest stars next time, making me wonder if the tournament will officially begin in the next arc. Guess we’ll see! – Javier E. Trujillo