SYNOPSIS: When the cops brought Bruce Wayne in for questioning last month, a giant money-man with a bazooka and a mustache for days blew the place up. So what’s that mean for Gotham’s ex-favorite son? Well, it means Bruce Wayne has to spend a weekend in lockup! Can Batman’s alter ego go the weekend without getting stabbed?  PLUS: A major Batman villain meets his death in a story that will rock the world of Gotham City in a monstrous way! Do not miss: “The Night [REDACTED] Was Killed” by Dan Watters and Kyle Hotz! 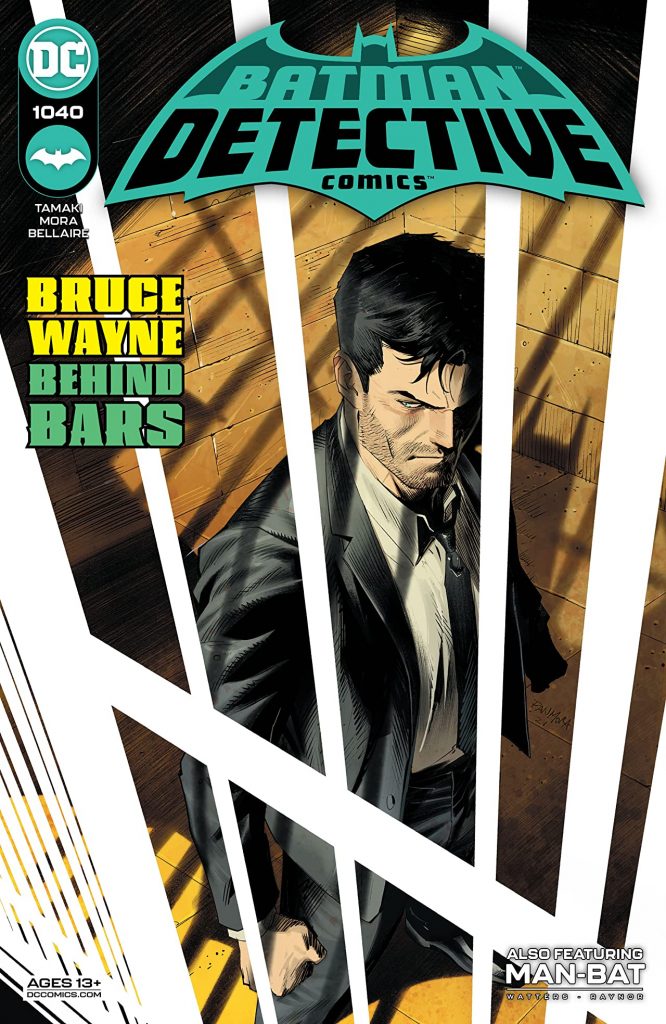 Detective Comics 1040 is without a doubt one of the more fascinating issues of Tamaki’s run.  The All-Star team of Tamaki and Mora are back together, and it is a beautiful thing.  This issue is the most entertaining to date but may not sit well with “street-level” fans.   The backup story delivers some heavy blows to Man-Bat. This backup tale is right off the heels of his most recent series, which I just happened to review for BOF.

Keeping with the momentum of the last issue, Tamaki delivers a jailed Bruce Wayne that is entirely different from Bruce Wayne: Fugitive.  Tamaki does wonders with Barbra Gordon as she steals the book early on.  But it is a drunk flashback that will leave readers with a Smylex grin.  A young Batman was taking on the Joker and the inexperience of Bruce Wayne.  As you go panel to panel, you will hardly be able to contain your fanboy joy.   It’s one of the unique stories within a story I have ever read—pure comic book bliss.

The cherry on top of this Sunday is some solid Oswald moments with Worth.  I find Worth fascinating; he is old Gotham, physically he can stand toe to toe with Batman, and now he is dealing with Penguin.  I like that mafia, everyman type villain.  I wonder if there is a bit too much sci-fi in the story.   Or just too much for my liking.

Well, I got to say, Mr. Mora, you sure came back to Detective in a big way.  In previous reviews, I was totally fine with Viktor Bogdanovic filling in. After this issue, there is no doubt Mora is on another level.  The splash pages are glorious, and those creative layouts are back.  Mora’s artwork in the flashback scene is a guaranteed crowd-pleaser.   It may be the easiest to follow fight you can read in comics to date. Every Batman fan is going to want lock screens, posters, t-shirts of some of this stuff.  It’s that damn good!  You can also see that Mr. Mora is a fan of the ‘89 yellow oval, #TeamYellowOval.   The book as a whole is astonishingly drawn.  Mora packs in details from inside dimly lit rooms to skyscrapers over Batman’s shoulders.  No part of the page is left without detail and care.  Jorge Jiménez better look out, Dan Mora is coming for the title of best Barbara Gordon artist.

As I mentioned earlier, I did review the latest volume of Man-Bat.  I think it was great, track down the issues, buy the trade, read it digitally (yes, I said that).  Please do what you need to get your hands on that series; it was brilliant—putting the character in an exciting place.  Here? I’m not so sure.  Writer Dan Watters provides a dark and grim tale that I feel does not match up with where we last left Langstrom in the pages of Man-Bat. Almost felt like a retelling of the origin but forcing in the latest volume. Remember when I said that the primary story was a bit too sci-fi for my taste? Oh man, this backup tale takes the cake.  The best part of the backup is artist Max Raynor’s Batman and Man-Bat.  It is at least an excellent tale to flip through.  We have had a good run of backups on Detective, and we were due a clunker.

Tamaki and Mora are united wonderfully in this issue.  Bruce Wayne and Oracle at their finest, working together trying to clear his name.  A wonderfully crafted moment of a young Batman fighting with the Joker that is drawn to perfection.  The weakest link about Detective being the back story.  I still think this is a must-have for your pull list this week.  It’s all about the primary story anyway. – Peter Verra

Making the Case for “Matches Malone” in Matt Reeves’ THE BATMAN...