NO TIME TO DIE Review by JoAnne Hyde 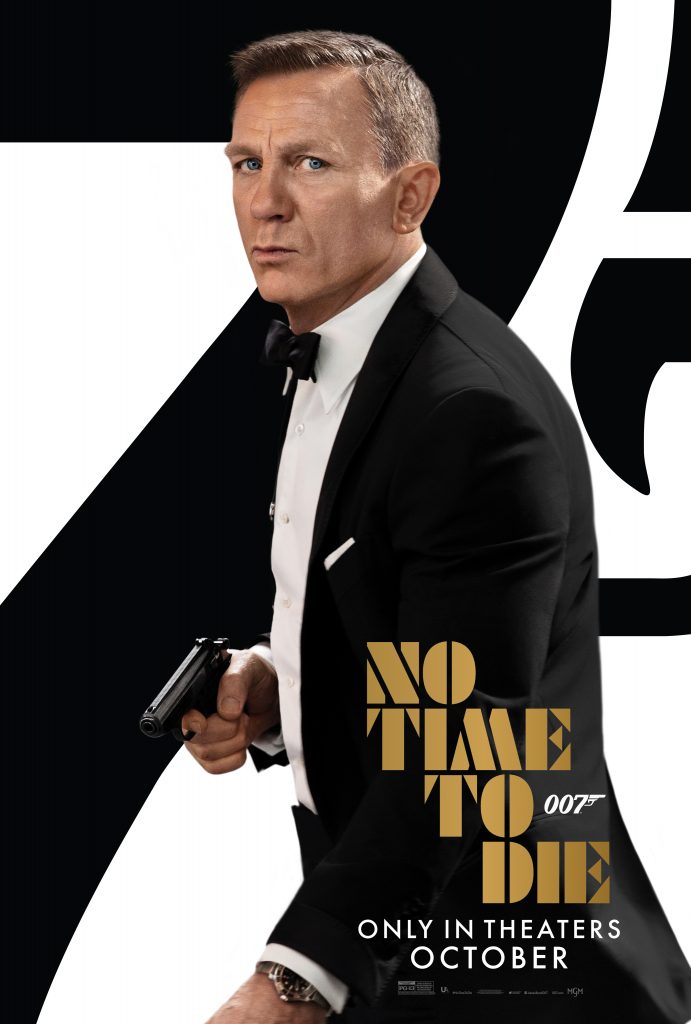 Even if you’re not a fan, you’d be well-advised to see Daniel Craig’s fifth and final turn as James Bond in No Time to Die.

When you’re dealing with suspense, it’s best not to know too many details so as not to ruin it. Therefore, this review will be more general than specific. That said, you’ll find many of the recurring themes and epic stunts that are characteristic of anything James Bond-related.

I feakin’ love Daniel Craig as James Bond, but I can understand why he’s stepping down. One is age. He’s 53 and has suffered a number of injuries doing his own stunts. He has had two knee surgeries and shoulder reconstruction. There comes a time when nature takes over and smart people bow to that. But, I’m really going to miss him. His vivid blue eyes and steely gaze can bring any bad guy to his knees. Believe me, I wouldn’t dare stir his martini! And yes, the line is in this script. So is the classic Aston Martin DB5 that he drives so skillfully, wreaking havoc on adversaries. In fact, it took 8 stunt replicas to film No Time to Die. Not hard to see why!

Craig, in general, is such a good actor that he makes you believe the outrageous conflicts and such that the character experiences. Of course, as usual, the bad guys are exceptionally bad shots, and Bond survives and walks off injuries that would put an ordinary man in the hospital for a week. Be honest. You’d be disappointed if he didn’t. Every man wants to be him, every woman wants to be with him, and everyone he works with wants to shoot him!

The cinematography in the film is spectacular. The film was shot on location in Norway, the Faroe Islands, Italy, Jamaica, Scotland, the Isle of Wight, and of course, London. Stark sometimes, dramatic other times, or picturesque — the locations set the tone for the film’s action. Hans Zimmer’s sweeping musical score intertwines the traditional Bond motifs with his own compositions, perfectly paired to the scene of the moment. I’ve seen so many films overpowered by an overwhelming score, but Zimmer never makes this mistake. As it should, his score enhances the action.

The film opens with a prologue, minus Bond, that becomes important later in the narrative. A mother and daughter in a remote house in Norway are terrorized by a very creepy, masked assassin. His target, the father, isn’t there. The lone survivor turns out to be critical to the narrative.

Afterward, the usual, visually striking montage of images always shown during the opening credits, plays out to the grammy-winning song and performance by the amazing Billie Eilish. Then, the audience is shifted to a panoramic scene of Bond and Madeleine Swaan (Lea Seydoux) zipping along a curving mountain road toward Matera, Italy. Bond has retired — mostly — and they’re going on holiday. But, he’s still looking over his shoulder which turns out to be justified. When Bond falls in love, someone usually suffers. In the long run, it may not be whom you think.

So, what could lure him back into action? That would be a visit from an old friend/associate, Felix Leiter, played by the wonderful Jeffrey Wright. He asks Bond to come to Cuba with him to try to stop a lethal bio-weapon. The scientist working on it, Valdo Obruchev (David Dencik), has been kidnapped. Obruchev has all the information on the genetics behind the weapon. Leiter is not entirely sure who’s behind it, but he suspects that whoever the mastermind is maybe working with Ernst Stauro Blofeld (Christoph Waltz). Blofeld is currently imprisoned in a super-secure prison in England, but Leiter is sure he’s somehow in contact with the unknown evil scientist behind the project.

In Cuba, Bond is aided by a CIA agent, Paloma, played by the radiant Ana de Armas, but the outcome is not what they expected although Bond learns something new about the bioweapon.

Circumstances lead Bond back to MI6 where he confronts M (Ralph Fiennes). Miss Moneypenny (Naomie Harris) and Q (Ben Whishaw) are on board as Bond’s allies. M informs Bond that his number, 007, has been assigned to a new agent, Nomi (Lashara Lynch). Nomi shares Bond’s skills and attitude and proves to be a formidable ally, especially in accessing the island compound.

Rami Malek as the Lyutsifer Safin Malek has less screen time than most villains of the past, but he’s a good one. He gives an eerily quiet and nuanced performance that exudes arrogance and malice. Safin’s connection with Madeleine, and therefore his connection with Bond, comes to light.

All performances are exceptional. Nobody does crazy better than Christoph Waltz. Ralph Fiennes gives us a world-weary, somewhat subdued M who sees his admiration for Bond as a weakness. Moneypenny has been empowered as a character in recent films, and Whishaw delivers his quirky, appealing performance as the genius behind Bond’s gadgets and intel.

My one complaint about No Time to Die is its length. Following the annoying trend toward longer and longer films, it runs 2 hours 43 minutes. The story could easily have been told in 30 fewer minutes. Other than that, it’s a remarkable film. I recommend that you stay through the credits. There are no extra scenes, but there is a crucial bit of information. – JoAnn Hyde