Thanks for reading the second, and final, BOF Mailbag for September 2021!

DC FanDome ’21 is only about 2 weeks away and that means we’ll finally get to see that new trailer for THE BATMAN!

If you missed the previous BOF Mailbag, CLICK HERE to give it a read.  Now, now to your questions. – Bill “Jett” Ramey

Jett, Do you think a DARK VICTORY animated film will happen?

JETT SAYS: I know that it’s a story that they are looking at adapting as an animated movie…along with several others as well.  If I had to guess — based on how successful THE LONG HALLOWEEN was — I’d say yes, it’ll happen.  TLH was just too good of a setup for more Batman in that particular universe.

What’s going on at WB? Is Walter Hamada getting pushed out with the merger of Discovery? Does it look like the Cavill/Affleck universe could continue?

JETT SAYS: Apparently, folks are quite happy that AT&T is cutting bait and running away from the film, TV, streaming, and comic book business.

Hamada is firmly in charge of DC Films for Warner Bros. and they are — and have been — moving forward with DC on film.

In regards to what you call the “Cavill/Affleck” universe continuing, I’m taking it as you asking if Henry Cavill and Ben Affleck will return as Superman and Batman, respectively, in future WB DC movies.  I’m pretty sure THE FLASH is Affleck’s “cool way to segue out of the role” as he wanted and I do not believe Cavill will play Superman again.

Will the marketing, promotion, products, etc…be different for THE BATMAN or will it be the usual?

JETT SAYS: I suspect that it’ll all be in line with previous solo Batman films and other big Warner Bros. event/tentpole films…and I’m looking forward to it all.

After THE BATMAN movie coming out in March of 2022, can we expect to see the movie have a lot of special features on the Blu-ray release?

JETT SAYS: I suspect that yes, there will be special features on THE BATMAN Blu-ray.  ” A lot” of ’em?  I’m not sure.

When are we going to see more THE BATMAN toys (collectibles) out in stores?

JETT SAYS: I’m quite sure that we’ll start seeing stuff show up after DC FanDome in a couple of weeks — especially with the Holiday Season kicking off in just a little over a month.

If you had to guess now, where do you expect Paul Dano’s Riddler (in THE BATMAN) to rank in terms of iconic on-screen Batman villains?

JETT SAYS: I truly believe that this is going to be a unique, fresh, and cool interpretation of The Riddler.  And Dano’s a fantastic actor.  Whether or not he reaches the “Heath Ledger Joker” level — which is the pinnacle — I can’t say.

Also, I have a sneaking suspicion that Edward Nashton will not end up being THE BATMAN‘s Big Baddie.  I figure Matt Reeves has a lot of surprises in store for us.

JETT SAYS: I can 100% confirm that BOF will cover and review any and all spinoffs of THE BATMAN — whether on the big screen or HBO Max — via written reviews and podcasts.

Matt Reeves’ planet of the PLANET OF THE APES movies were each about “something larger” and explored complex issues in today’s world. Any clues as to what THE BATMAN will really be about?

JETT SAYS: Yeah, I think THE BATMAN will be more than just a “superhero movie” as well as very different from any Batman film we’ve seen to date.  We know that THE BATMAN is going to be a noir, street-level, gritty, realistic, murder mystery/crime thriller.  Matt Reeves has also said that the film’s story is going to be “very emotional.”  I’m looking forward to seeing what he has in store for us and, as I said in a previous answer here, I suspect Reeves has a lot of surprises in store for the audience.

Based on what you know and heard about The Batman, what do you expect it’s impact to be on the comic book movie genre? Do you expect something similar to the Nolan trilogy in terms of impact or reception?

JETT SAYS: I believe THE BATMAN is going to be a game-changer for the genre.  I love THE DARK KNIGHT TRILOGY and always, will, but it wouldn’t hurt my feeling at all if Reeves surpasses the greatness of those films in terms of impact and reception.

Had it been up to you after the turmoil from Keaton’s casting [as Batman for BATMAN ’89] who would you have cast as Bruce Wayne/Batman?

JETT SAYS: I agree with Tim Burton that it’s hard to envision most — if not all — of the “Male Action Movie Stars” of the 1980s suiting up as Batman back in the day.  And of course, I believe the casting of Michael Keaton as Batman was brilliant and was certainly proving to be so.  Thus, I’m really not a fan of playing in hindsight hypotheticals…but I’ll participate this one time.

Any ideas on how a grounded and realistic mr. Freeze could work in a Matt Reeves universe?

JETT SAYS: I don’t believe that Mr. Freeze being literally frozen is a core aspect of the character.  That was just a gimmick when the character was first created as “Mr. Zero” back in the late 1950s.

Need an example?  Heath Ledger’s Joker in THE DARK KNIGHT wasn’t “permawhite” — but he was still sure as hell “The Joker.”

JETT SAYS: 1) I don’t if you’re the only one, but I can say that I’m not worried in the least.  To be honest, BATMAN ’89 was not 100% Tim Burton’s vision.  BATMAN RETURNS 100% was, but the prior film had a lot of studio and producer involvement.  And I don’t think MK would’ve taken the role in THE FLASH if it disrespected or wasn’t up to par with his 2 Batman films…BATMAN RETURNS notwithstanding. 😏😛

2) A straight-up adaptation of BATMAN BEYOND with Terry McGinnis and the futuristic Neo Gotham?  I’m not sure.  I know they want to do more with Keaton’s Batman in the near future.  Perhaps it’s more of a riff off of BEYOND as well as THE DARK KNIGHT RETURNS.

For me the more Batman or Batman-related material the better as long as well done.  We have Penguin and GCPD [HBO Max] series announced before [THE BATMAN] even comes out.  Are you concerned with overkill, the movie is not out yet and in this day and time the only thing really doing well is mostly Marvel movies.  I thought THE SUICIDE SQUAD deserved much more than it got.  Guess I’m worried THE BATMAN won’t succeed even if it’s great, thus knocking out the chance of sequels. And with the 45-day [theater exclusive] window will be much less chance of getting what it deserves…what are your thoughts?

JETT SAYS: To me, the announcement of those 2 THE BATMAN spinoff series on HBO Max says that Warner Bros. has liked what they’ve seen of Matt Reeves’ film and is very confident in not only the movie, but expanding that universe.

THE BATMAN will perform better at the box office than THE SUICIDE SQUAD for several reasons.  Number 1, it’s a Batman film — and a solo Batman movie at that. Secondly, THE BATMAN won’t be carrying the baggage that TSS did, quite frankly.  I loved the film, but it was going to be a hard sell because the general audience really didn’t care much for the 2017 film; and, frankly, there was no Will Smith.  Plus, it had a hard R rating which limited its potential audience.

Is there more to Barry Keoghan’s role than meets the eye?

He’s too big and talented of an actor to be playing some random GCPD officer in THE BATMAN.

OK here is my question?  1) Are you excited about what supervillains are coming to BATWOMAN? 2 ) If they do bring Batman into the show, who would you cast.

JETT SAYS: Zach, unfortunately, I can’t help you with those questions my friend as I do not watch BATWOMAN.  And didn’t they cast someone as Hush who looks just like the Bruce Wayne of that show?  Anyway, these are questions for and a conversation you should have with BOF Senior Contributor Peter Verra.  Hit him up on Twitter @PETEILLUSTRATED, sir.

What are you more excited about: THE BATMAN or [Michael] Keaton’s returns [as Batman] in THE FLASH?

JETT SAYS: THE BATMAN, hands down.  As much as I love THE DARK KNIGHT TRILOGY, I think what Matt Reeves is bringing in this film is even closer to “My Batman” and my personal Batman sensibilities.  And yeah, that means I believe THE BATMAN will be more grounded, gritty, street-level, and “realistic” than the Chris Nolan films.

With that said, I am very much looking forward to seeing MK as Batman again in THE FLASH. 2022 is going to be a good year for Batman fans when it comes to Batman on film!

What Might THE BATMAN’s Comic Book Influences Tell Us? 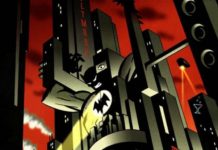 The EGO in THE BATMAN