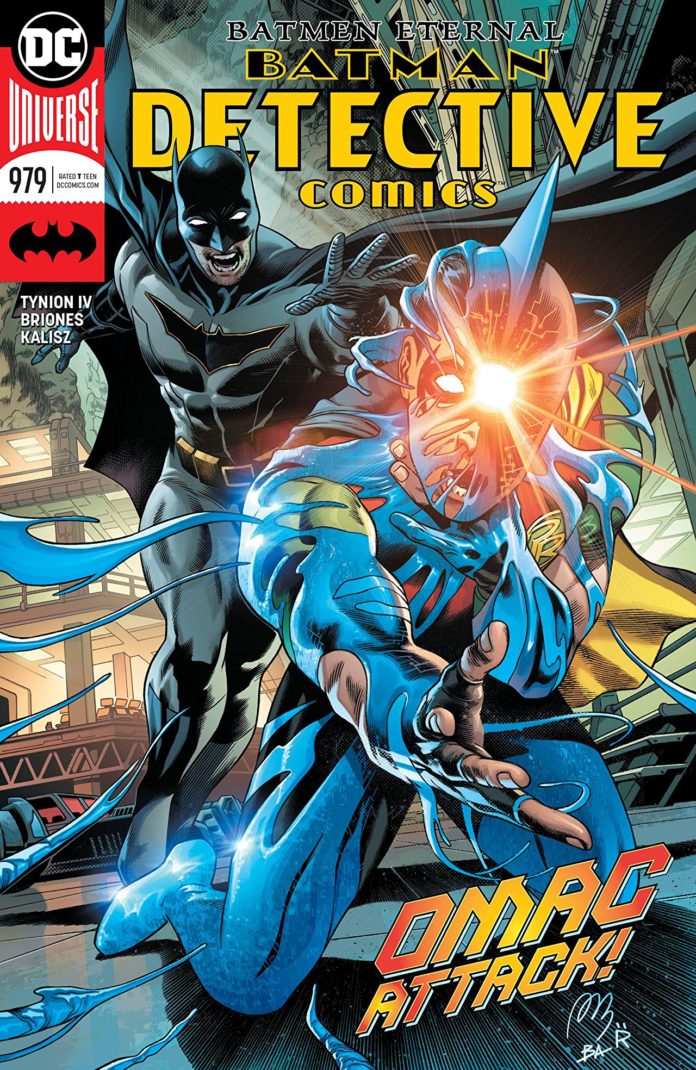 SYNOPSIS: “BATMAN ETERNAL” part four! Ulysses Armstrong knows everything there is to know about Tim Drake’s future—including every inevitable step he’ll take on the road to becoming a dark version of himself! Unfortunately, Ulysses is perfectly happy to take everything from him…and use it to give birth to an unstoppable menace!

With each issue, we get near the end of James Tynion’s adventures in Gotham City. Readers from the 90s have been the ones most enjoying the run. Characters held near and dear to our hearts are given their due. Detective Comics is a Rebirth of not only Tim Drake, but Stephanie Brown and Cassandra Cain as well. It’s been a long time coming for these three characters and Tynion has yet to disappoint.

Ulysses’s has gone full mad scientist and is purely evil, terrifying everytime he is on the page. Torturing Tim from inside his own mind, using OMAC to show him a future that he has failed all and how helpless he is now. I was not sure what to make of Ulyssess when he first appeared issues ago. Now I simply dismissed him as a fanboy — almost a representative of the reader, supplying us that point of view. Now he is one of the more impressive manipulators in the DCU.

What Tynion has done with Orphan and Spoiler is tremendous. They have had their arcs, their stories and every time I see them in a book they steal the issue. The story Tynion gave us is wonderful.I was into it from page one. Totally catching my imagination but its Stephanie’s cameo; it’s the best cameo I’ve read in a long time. Batman knows the chips are down and there is only one way to get through to Tim and he has to go to Stephanie. The scene is one page and it’s wonderfully written perfectly summing up this new and improved Stephanie Brown.

Philippe Briones provides the interior art work of the issue.  The look that Briones gave Ulysses throughout the issue was as creepy as he deserved to be. Hovering over or around Tim grinning and taunting his prey.  I will say Ulysses new haircut does bring me back to Jim Gordon’s look when he was playing Robocop-Batman.  Briones provides some great splash pages and panel placement through out the book. No page looks the same and it’s sleek and sharp. Small and large boxes, hard angles, characters front and center giving you vertigo at the perfect time, creativity flows through out the book from start to finish. You already know what my favorite page of the book is — that’s right, Batman asking Stephanie for help. Stephanie as she did with her words steals this one page with her actions/body language. This scene is just perfect in so many ways.

With two issues left on Tynion’s run, the stakes have never been higher and the stories have never been more entertaining.  Tynion and Briones give us one hell of a story leading up to what should be a crazy conclusion. Tynion really brings out the best of the team around Batman expanding on that world to tell a story that has 90’s readers loving every issue.  If you’ve been reading Detective you know what to expect.  This run is more caped up/roof top-jumping madness you don’t want to miss!