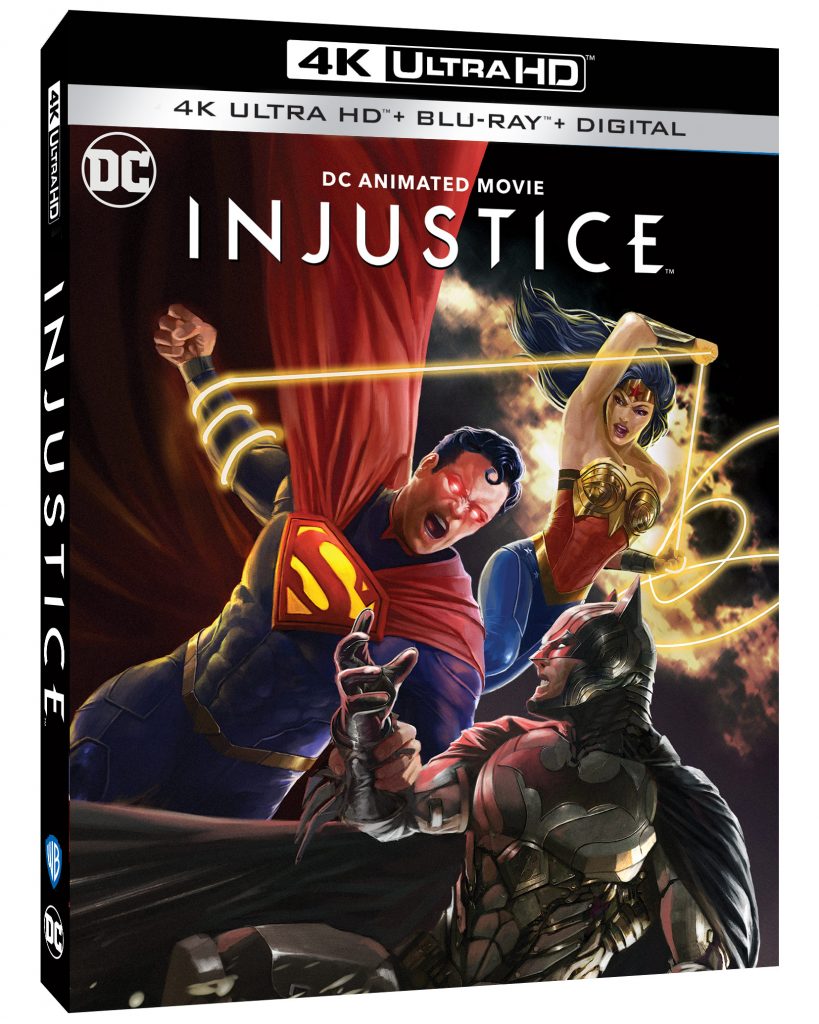 That’s how I view the INJUSTICE series, beginning with the popular video game from 2013. A prequel comic book series, from acclaimed writer Tom Taylor, was released earlier that year. Mainly, it’s our DC superheroes fighting against one another over conflicting ideologies. The (more) surprising twist is that The Man of Steel is a bad guy.

For some, Superman in INJUSTICE is everything Superman isn’t. For others, it’s an interesting concept and an idea to consider for storytelling.  Which takes us to the new DC animated movie, INJUSTICE.

Based on the video game, and comic series, the movie pits Superman in a harsh, tyrannical light, where he has no F’s left to give (like BOF!). His newfound path splits the Justice League, with Batman being his harshest critic.

If you’ve seen the trailer, you know the main factor in Superman getting to this point. However, the movie has a few surprises before he gets there, and I’m no spoiler. What unfolds is a few unsettling events to show us this is a new Superman, and this is a new brand of justice.

As said above, your mileage may vary. This interpretation of Superman doesn’t work for some, as the whole point of the character is that he will not cross that line. That’s how he remains on this pedestal we all aspire to.

I enjoyed this movie. The story was interesting to me and had ideas that were worth exploring. Including many characters from the DC Universe felt organic, as did the drama that unfolded between them. When every hero thinks they’re right, who do we follow? Is Superman overstepping his boundaries? If so, how can he be stopped? Is he adapting to the times, creating a brand of justice that is appropriate for the 21st century?

Again, your mileage may vary.

I will say, I don’t like seeing our heroes fight. Why do we need to spend so much time with heroes fighting heroes? I miss the good ol’ days of good guy vs. bad guy. Not Batman vs. Superman.

The voice cast for this movie was also really good, across the board. Justin Hartley was the star of the show as Superman. Anson Mount did a commendable job with a deep, brooding Batman voice that also deals with a terrible loss. Gillian Jacobs was also a highlight as Harley Quinn, as was her frequent screen-sharer Green Arrow, voiced by Reid Scott. Kevin Pollack, who I really like, lent his talents to The Joker, and to be honest, it wasn’t really my thing.

The action unfolding throughout the movie, albeit minor, was pretty good as well. I appreciated that we had a lot more character fighting, rather than big city disasters. That made it all feel smaller in scope, and personal, which is a strength of the story.

Overall, I enjoyed INJUSTICE. Ideas were brought to the forefront of the story, questioning the motivations and stances of many DC heroes. If you found yourself who to aspire it while watching this movie, I’ll help you out.