SYNOPSIS: Psycho-Pirate! Qu’est-ce que ç’est? The mind manipulations of one of the DCU’s most calamitous villains are revealed at the heart of Arkham Tower…but who’s really calling the shots? As Batwoman’s undercover operation takes a disastrous turn, Huntress finds her own mission inside the Tower growing more perilous by the moment! All is revealed in this explosive first chapter in act two of the “Shadows of the Bat” weekly event! Then, in “House of Gotham” part five, the Boy emerges from his Scarecrow caper with a new perspective on the world…but what’s scarier: Dr. Crane’s fear toxins, or Batman’s control of Gotham’s militarized youth? 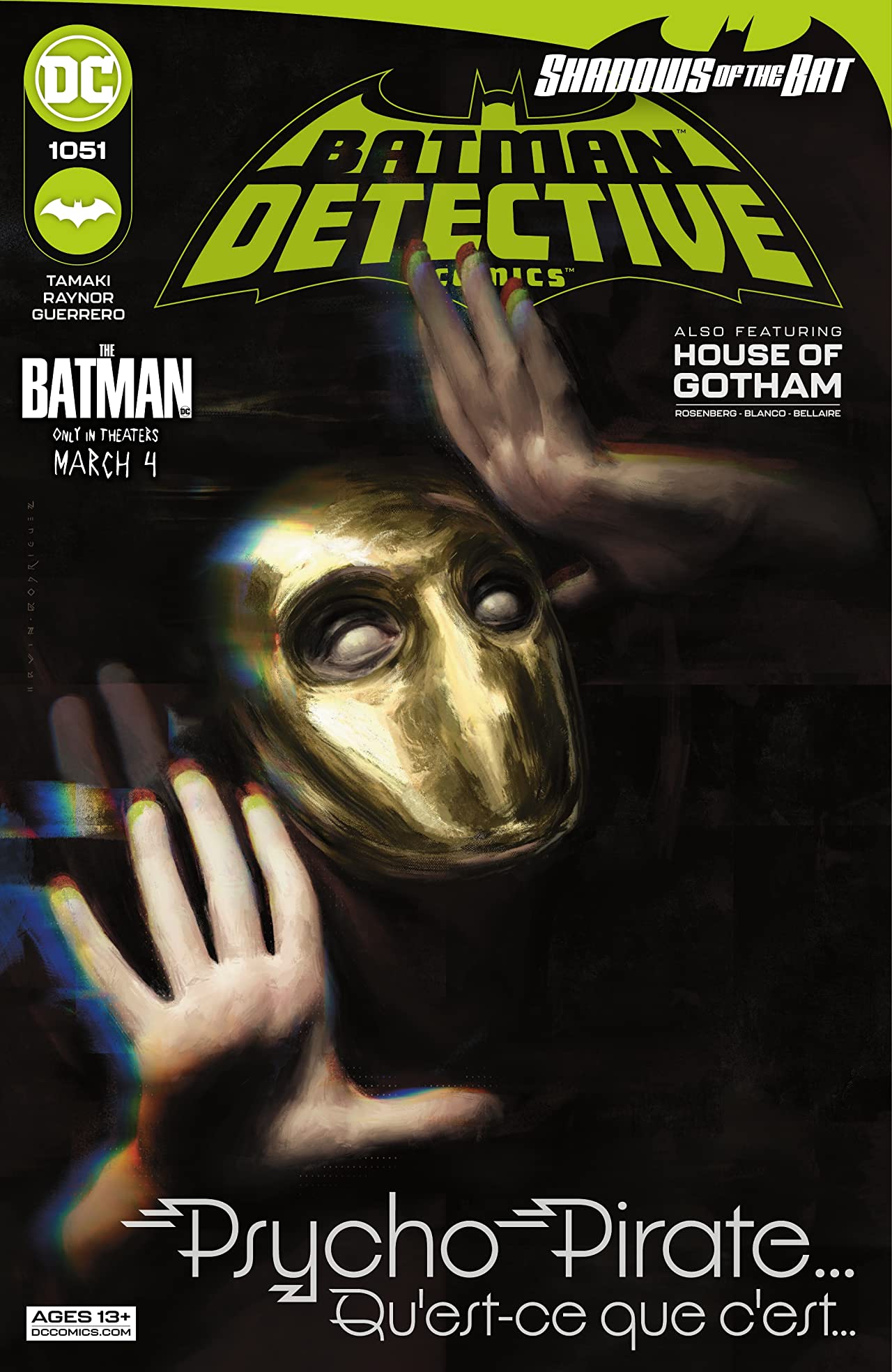 When DC announced Shadows of the Bat, I thought to myself, “Twelve books in twelve weeks? That has to be one hell of a task for a writer.”  I was curious if the book would suffer. I wasn’t that familiar with Tamaki’s work outside of her stint on Wonder Woman (759–769) and the mini-series Supergirl: Being Super. I enjoyed Tamaki’s takes on both characters and was excited for her to take over Detective. Still, Shadows of the Bat is a tall order for any writer, especially a writer who is as detailed as Tamaki. While I was a bit critical of the first three issues, I feel this format is perfect for Tamaki. She loves the slow burn, and it’s starting to pay off! Let’s dive into it!

Shadows of the Bat took a more prolonged amount of time than I would have liked to get going, but Tamaki has put the pedal to the metal! Here in part five, we get a great look at what Dr. Ware is doing in Gotham, and he is in it neck deep.   The last issue Tamaki dropped the Psycho-Pirate bomb on the final page now it all gets explained. In this issue, Tamaki takes the reader down a memory lane as she tells us the truth about Dr.  Ware and his relationship with Psycho-Pirate, and it is beyond captivating. Tamaki delivers a story about two men treading water while the sharks are circling. Ware is getting it from both the Gotham Underground and Mayor Nakkano while Psycho-Pirate is doing his best to stay caffeinated and in control of everyone’s emotions, and I mean every single person in Arkham Tower. These two men see the walls closing in on them; the desperation is sinking in, you can sense the tragic ending around the corner.

I mentioned how I thought Ivan Reis’ artwork was outstanding in past reviews but felt underutilized. Reis was not the artist in #1051; that job now belongs to Max Raynor. Raynor delivers the goods this issue. Raynor shows a wide range of emotions, anger, fear, desperation, and concern. You can get a sense of what that character is going through without reading the words. Raynor provides the reader with a wonder Netflix-style hallway fight featuring Helena Bertinelli.   In that scene alone, you have everything on display, from the fear in Dr. Meridan, the anger and determination on Bertinelli, and just an extraordinary sequence of elbows and fists to our villain’s face. The money shots, however, come from Dr. Ware and Psycho-Pirate.  Raynor delivers with just their eyes alone. You can see Psycho-Pirate breaking down, and the panic is setting in. Ware is losing it himself, unable to control the lies in some scenes, while in others, he is doing his best to keep that straight face.   Combine that with the amount of detail Raynor puts in the backgrounds, and you have the multilayer art that veteran comic book readers love to dissect and enjoy.

I can’t remember the last time I read a backup story as mesmerizing as this. Matthew Rosenberg and Fernando Blanco’s House of Gotham is doing its best to upstage the primary tale at all costs. Rosenberg takes our red-headed friend out of the orphanage and into the Oswald Cobblepot school of villainy. Rosenberg crafts an absolute masterful tale of what it is like to be “raised” by the Penguin and work in that world. Blanco’s artwork works so well with the story. It is bright and chipper at times when our main character is leaving the orphanage or enjoying his stipend. It is gritty and bleak when our main character is instructed to sleep in the basement or getting his face smashed into a brick wall. Rosenberg and Blanco do a great job of mixing what should be happy moments with what could be moments out of Todd Philips’ Joker.

Detective Comics #1051 is nothing short of brilliant on all fronts.   The primary and backup stories can easily stand on their own. Paired together, they create one powerhouse issue that should not be left off the shelves on new DC day. The creative teams in this book are in a tag team wrestling match. Two writers and two artists exchanging blows, one after another. At the same time, the reader is screaming in utter enjoyment with every turn of the page. Someone’s desperation drives each story with the perfect amount of anxiety and lies mixed into to create some incredible tension and storytelling. Readers will be floored at how well this comic book is so masterfully crafted. This issue is a must-have for your pull lists this week, an absolute must. – Peter Verra