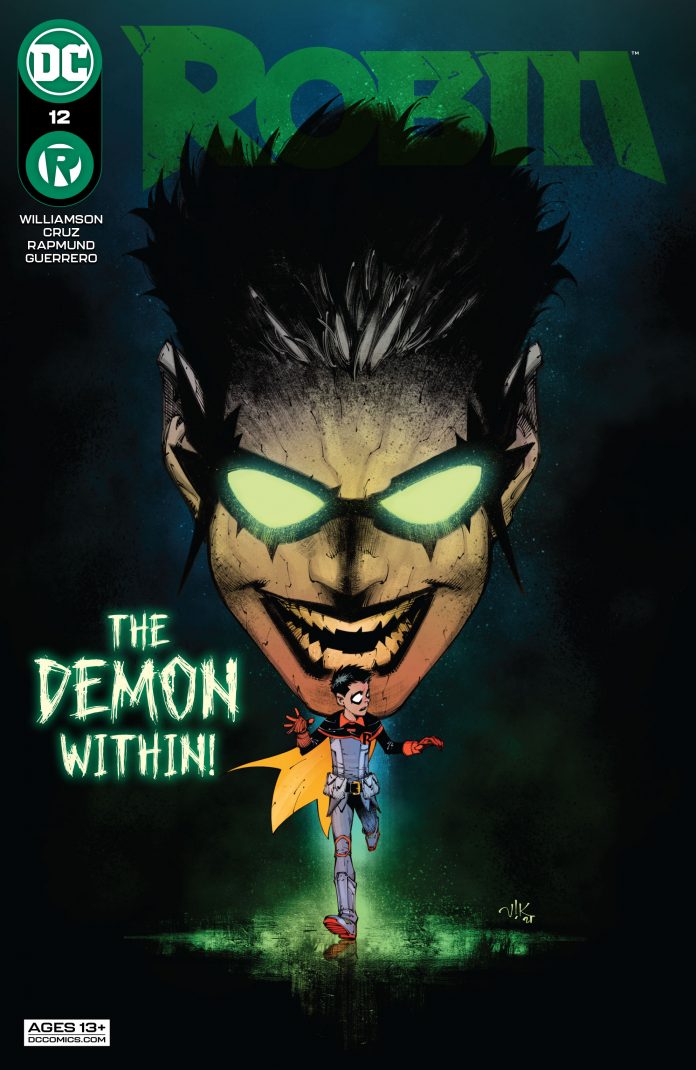 SYNOPSIS: Demon versus detective! The Lazarus Tournament is over, and Damian returns to Gotham a changed hero! But there is one last opponent he might fight to the death…himself. This lead-in issue to the epic Shadow War event is one you dare not miss!

After the last issue’s surprise ending, I was eagerly awaiting to see what Williamson was going to do next!

Joined once again by Roger Cruz, Williamson brings more of the drama and character work readers have come to expect on this title. Starting off quietly, Connor Hawke finds Damian on a scenic outlook, reading from his manga, the contents inside echoing where Damian is in this series. They definitely feel like friends now, with Damian even cracking a smile! I hope this isn’t the last we see of Connor in this book. I really appreciate the bond these two have formed.

After a lighthearted beginning, including Damian stealing his mom’s airship, Robin’s return to Gotham is a somber affair, drenched in rain. Standing at Alfred’s graveside, this is the moment of truth. Will Damian resurrect one of DC’s most beloved characters?

The moment of truth is interrupted by…Damian?!?! Robin Damian finds Demon Damian confronting him. I appreciated Williamson having Robin work out what this Demon doppelganger is. As the son of The World’s Greatest Detective, this is child’s play for him, although I was puzzled why he said his doppelganger wasn’t wet when clearly the art depicts water running off him.

I loved Williamson’s meta-commentary on Damian here. Every negative view of the character gets thrown in his face by the Demon version and Damian takes it in and endures it, leading to his fateful decision…

I’m not going to spoil it here, but I totally see where Damian is coming from in his decision-making process. This leads to Talia’s appearance and more conflict, but perhaps not one the readers would expect. Again, Williamson’s characterization just shines here. He gets the core of these characters and the decades-long conflicts that have driven them. The characters really feel like they are about to embark on a new era in their relationships, one that is immediately going to be put to the test in Shadow War.

Cruz continues to be an asset to the book. Inked by Norm Rapmund and colored by Luis Guerrero, the visuals are solid. The cemetery sequence really stood out for me as the storytelling was on point. There was a splash page towards the end that I wasn’t expecting. Perhaps Flatline isn’t the friend Damian thinks she is, after all.

While this issue may not give readers what they expect, it’s another fine entry and a superb way to close off the first year of stories, highlighting the growth Damian has made. Thanks to Williamson, I can definitely say I am more fond of Damian after his time on the series. He has added to the al Ghul mythos as well, making this book indispensable to Batman lore. Onward to Shadow War and Damian reuniting with his father! – Javier E. Trujillo