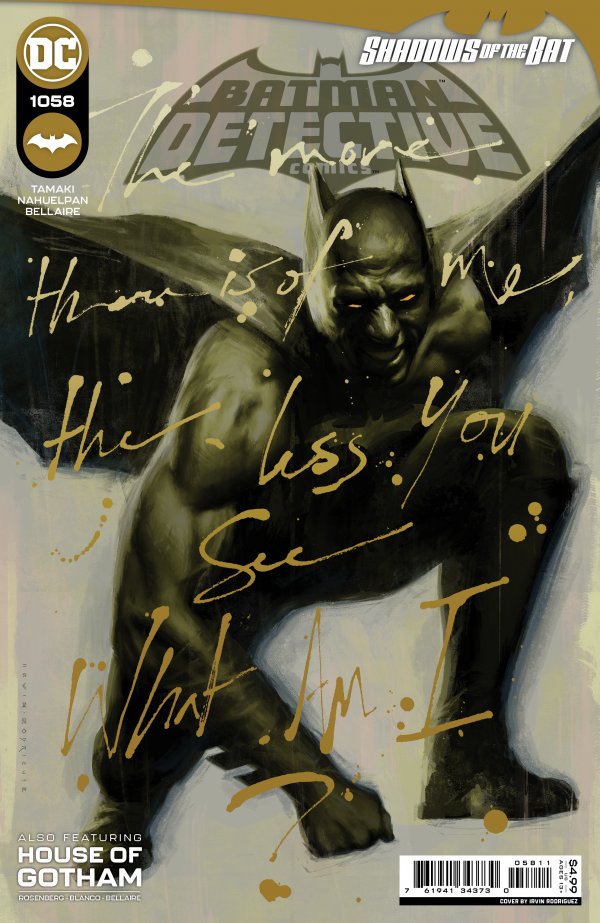 SYNOPSIS: The Tower crashes to a close! In the epic finale to this weekly tale of terror, alliances are forged amongst unlikely allies, and the Bat-Family reassess their strategy in their war on crime in Gotham City. Will Psycho-Pirate be Batman’s newest eyes and ears on the streets? Can Koyuki Nakano ever recover from the traumatic events she witnessed? How much fun will the Batgirls have beating the snot out of Penguin’s goons at a seedy motel? The answers await you and much, much more in this cataclysmic culmination! (Except for the Batgirls, I’ll tell you right now that answer is “a lot.”)

As if one dramatic conclusion wasn’t enough, the finale of “House of Gotham” will leave you breathless as Batman is faced with an impossible decision: kill a monster of his own creation…or let others be killed in the process. “Save the patient in front of you” was the advice from Thomas Wayne…

The twelfth and final chapter of Shadows of the Bat is here.  This twelve-issue epic story is told exclusively within the pages of Detective Comics.  Twelve issues in twelve consecutive weeks were brought to us by writer Mariko Tamaki and various artists.  Crafting a tale of this magnitude is no small task.  Tamaki had her work cut out for her, and along for the ride, every step of the way is Mathew Rosenberg and Fernando Blanco with their backup story, House of Gotham.  Two stories in it for the long haul, did they deliver?  Let’s dive into it!

In the last issue, Tamaki set up a grand finale; Batman was back in town, the rest of the Bat-family was ready to take on Scarecrow and the Party Crashers.  Mrs. Nakkano had Psycho-Pirate’s mask.  The audience was teed up for an epic conclusion.  The final verdict is…good but not great, not what you were expecting.   Tamaki relies heavily on exposition from Deb Donovan.  As we read her article as she types it, this is not a bad ending, but the previous issue was misleading.  The reader knows everything worked out fine, but we have no idea what went down in Arkham Tower.  We learn the truth about Dr. Ware and how he was able to con his way to such a high position within the city.  There are moments of Bat-brilliance, as we have come to expect from Tamaki.  The tactical aspect of Batman and his team at the motel is stellar, some of the best you will ever read.  It’s not what was hyped up; there is still that cliffhanger of what happened after Mrs. Nakkano put on that mask.  Those questions are not answered.  Instead, we get conclusions to events we did not see take place.   The reader knows what happens with Dr. Meridian, Psycho-Pirate, and the Bat-family.  We have no idea how we got here.  It almost feels like an issue is missing between Detective Comics #1057 and #1058.

Once again, Amancay Nahuelpan will leave your jaw on the floor with his artwork.  Nahuelpan perfectly blends that old-school storytelling with modern-day stylized art.  His layouts can tell a story without any word bubbles.  Nahuelpan’s action panels might be some of the best I have ever had the pleasure of witnessing in my seven years of reviewing Detective Comics for BOF.  Batman and Batwoman meeting with Deb Donovan is as stoic as vigilantes will ever get.  Nahuelpan guides the reader through Donovan’s article with computer windows and QuickTime files, leading you to the crime scene and eventually to the Penguin’s dinner table.  The motel scene is vintage Bat-family, an excellent set and up, and heroic/brutal takedowns by Batman and the Batgirls.  Nahuelpan and his background linework add an element of speed to splash pages, and you feel like you are reading a motion comic.  Just masterful storytelling.

If you have been reading past reviews or listening to Ryan Lower’s Batman Book Club podcast, you know that Mathew Rosenberg is the best writer in Gotham City.  At one point, Rosenberg was writing three Batman-centric stories.  Here his backup tale, House of Gotham, has been brilliant.   Rosenberg has crafted one of the most heartbreaking stories ever in DC’s most demanding city.  This was a tale of a young man who not only grew up on the streets but learned from the worst of the worst.  In this final chapter, Rosenberg delivers one hell of a fake-out, when you think that things will work out for a red-headed friend, Gotham City does what it does best, chews you up, and spits you out.  It’s not often that a backup tale outshines the primary issue in and issue out, but House of Gotham was a force of nature.  Rosenberg takes the reader on a journey where even when you know the outcome, you didn’t see it coming, but let’s be honest, this is Gotham City.  There are no happy endings, and there may never be.

Detective Comics #1058 is a good comic book; it’s not great.  It’s not what we were anticipating after #1057.  Honestly, that is a shame because there are solid Bat moments in this final chapter of Shadows of the Bat.  Tamaki did a magnificent job putting each member of the Bat-family on display in this story.  Everyone had more than enough time to shine with some exhilarating twists and turns.  While entertaining, this issue lacks seeing a proper conclusion.  We are informed of how it ends without seeing it unfold before our eyes, which is disappointing.  I was expecting a grand showdown that was teased and not delivered.

When DC announced that they were adding backup stories to some books and increasing the price, I was concerned.  While some of them have been good, none of them have been this good.  That is not the case with House of Gotham.  Rosenberg delivered on his ending wonderfully.  House of Gotham is a tale that needs to be on all Bat fans’ reading lists—spanning multiple eras of Batman flawlessly.  This story will be discussed for years to come; the only question is when and how this tale will be collected.

Grade, Shadows of the Bat: B

Grade, House of Gotham: A+