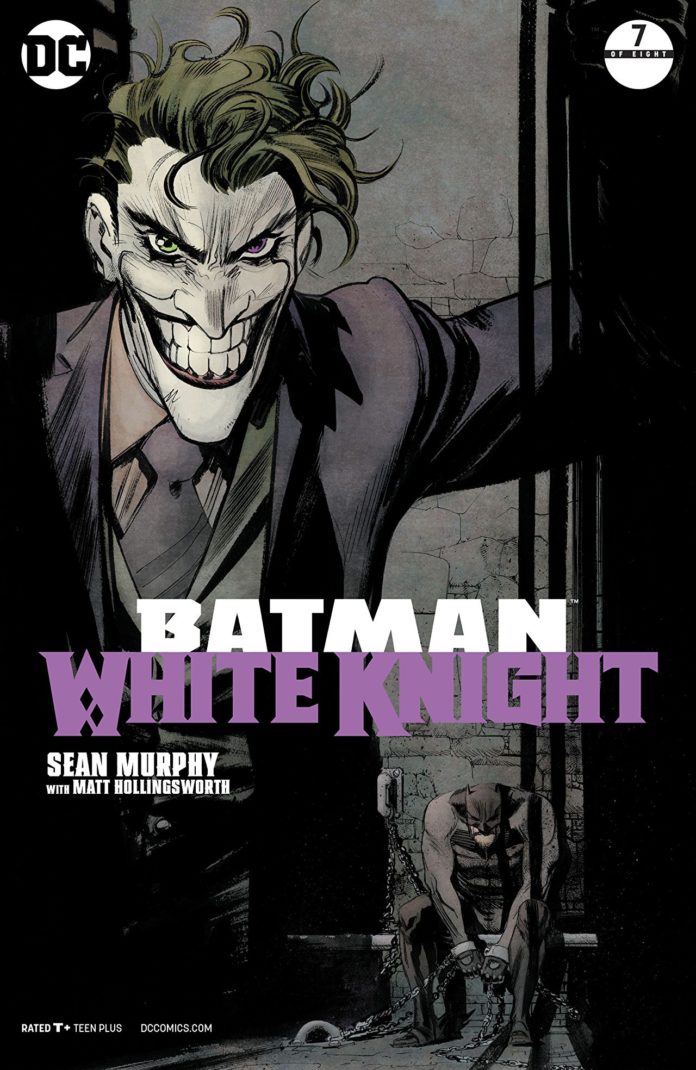 SYNOPSIS: This issue, it’s Jack versus the Joker! Napier’s identity crisis spins out of control and compromises his grand plans for Gotham City—but not before he strikes a fateful bargain with Neo Joker. A browbeaten Batman accepts a peace offering from Batgirl, and some unexpected advice from Alfred sets the tone for the GTO’s new mission to redeem the city.

The penultimate issue of Sean Murphy’s instant classic Batman: White Knight is here, and man it delivers. After reading issue #7, there’s no doubt in my mind the author/artist doesn’t stick the landing next month. But let’s put the future on hold and focus on the present.

Picking up immediately after last month’s exciting cliffhanger, Jack Napier is having a harder time controlling the Joker. It seems the serum from way back when isn’t holding on as long, giving the Clown Prince of Crime more daylight. This is exactly what Neo Joker wants, as she keeps a cold grip on Gotham. What’s there to do? We all know….Jack needs to go get Batman out of Arkham (which you may remember is how this series began).

That’s the issue in a nutshell, but believe me there’s so much more (as usual). This may be the most emotional and dramatic issue of the entire run, and that’s meant in a great way. Bruce has a few great moments with Dick and Barbara, we catch back up with Mr. Freeze, and light is shed on what happened to Jason Todd (it’s not what you think, but just as effective).

And as if Murphy wanted to top the Batmobile surprise from last issue, he has another ace up his sleeve here. I’d be laughing if I said I didn’t have a goofy grin on my face when all was revealed, and you’ll know exactly the part I’m talking about.

I love Batman: White Knight #7. I’ve loved everything with this series. Sean Murphy can do no wrong to wrap it up next month. I hope I’m not jinxing it, but by now the author/artist has proven himself, hasn’t he? This is one of the best Batman stories….EVER. Period. It’s gone beyond the “recent memory” and “out right now” talk. This series is unbelievable. And with the stakes higher than they’ve ever been, I can’t wait to see how he wraps it all up with issue #8.

I hope you have all enjoyed the ride, because it’s nearly over. It’s time we hop in a Batmobile ourselves and cruise to the finish line. – Ryan Lower

THE FLASH Director Announces Beginning of Filming on IG