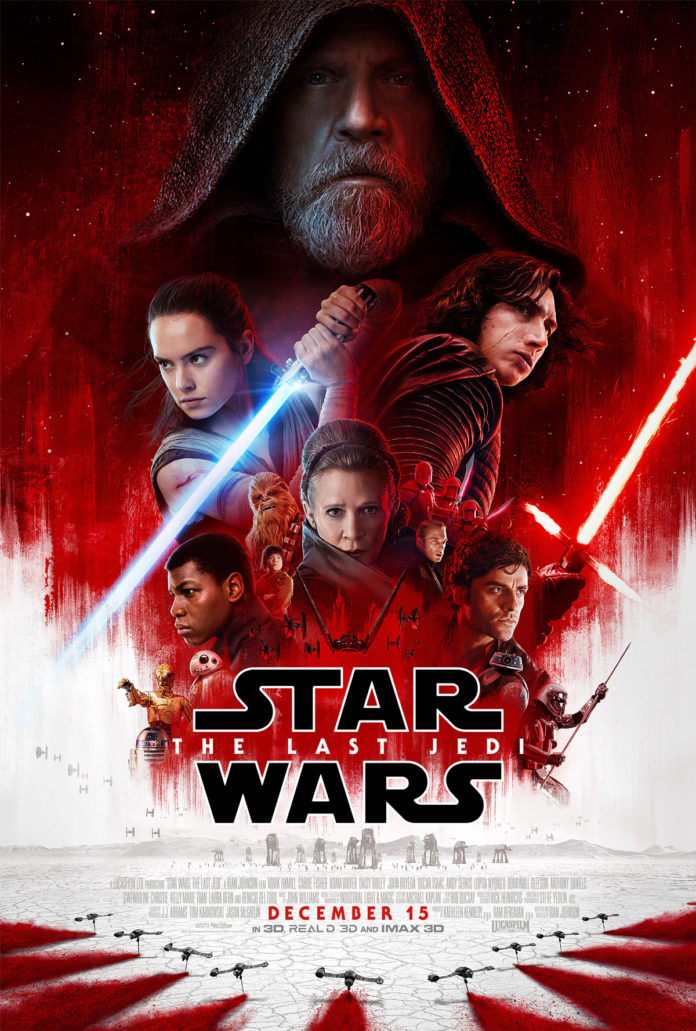 SYNOPSIS: In Lucasfilm’s STAR WARS: THE LAST JEDI, the Skywalker saga continues as the heroes of THE FORCE AWAKENS join the galactic legends in an epic adventure that unlocks age-old mysteries of the Force and shocking revelations of the past.

I just arrived home from my second screening of Rian Johnson’s THE LAST JEDI (AKA STAR WARS: EPISODE VIII) and all I can think about is this coming up Sunday when I am scheduled to see the movie again.

After my Monday press screening (thanks to BOF founder/editor-in-chief Bill “Jett” Ramey), I felt a bit disoriented. The film did not resonate with me in the way that I wanted it to, nor did the characters go in the direction I wanted them to go in.

Rian Johnson is a genius. We are in good hands for his future, non-Skywalker centric trilogy too, I might add.

If you have ever read my movie reviews on BOF, you know that I don’t do the typical formula where I break down the film for you. Rather, I tell you how the film made me feel. I can tell you is that I feel like I just had an experience at a Star Wars film that will resonate with me for many years to come.

Some of my quibbles from Monday still remain. A couple of major characters were somewhat wasted. And, as amazingly badass as they were, the constant battle sequences wore a bit thin after a while. Still, the cast makes this a Star Wars experience for the ages.

I absolutely love what director Johnson, Adam Driver and Daisy Ridley did with Kylo and Rey. Their next chapter will be one that will give me more grey hairs, since I have to wait another 2 years for it!

Poe (Oscar Isaac) is becoming this trilogy’s Han Solo, with this heroic swagger and anti-authority demeanor…and I cannot wait to see what JJ Abrahams does with him in EPISODE IX.

But the runaway star is Mark Hamill.

He shows us an older, broken Luke. A Luke more cynical than brave, but with the eyes of a man in a perpetual struggle to be both.

Rian’s script is full of heart, humor, depth and true character studies. And his directing allows his script to breathe and for his actors to embrace said material with razor sharp artistic precision.

As much as I love THE FORCE AWAKENS, it is fair to say it was very much a love letter to George Lucas’ original film, EPISODE IV: A NEW HOPE. THE LAST JEDI isn’t a love letter to anyone or anything. But rather a labor of love, compliments of Johnson and company.

It is fresh. Bold. Original. And incredibly brave.

Unlike its predecessor, it feels like a continuation of all the films before it. ALL of them. Yes, including the prequels – and that is a GOOD thing.

I read someone say (and I’m paraphrasing) that THE LAST JEDI was the first Star Wars film that wasn’t just about growing up, but rather growing old. I 100% agree. With this being Carrie Fisher’s last performance, that sentiment rings even more true (some of her scenes will give you chills!).

Perhaps that is why this chapter in the Skywalker saga resonates with me more so than any Star Wars film has in years. Not only is it surprisingly unique and unexpected, but it is also incredibly poignant.

At one point in the film, Luke looks at Rey and says, “This is not going to go the way, you think!” Listen to Luke.

I look forward to writing more about it; as well as discussing it on an upcoming BOF podcast where we can all peel back the onion together after everyone gets a chance to see it.
Until then, May the Force Be With You and…PORGS! – Rick Shew