SYNOPSIS: “THE TRAVELERS” part three! As Booster Gold, Batman and Catwoman zero in on the time anomaly, what they find and their actions to correct it will have ramifications on all of the DC Universe. Tom King and Master Class artist Tony S. Daniel end their first story with a bang that will tee up the next big development in the Batman/Catwoman romance.

“You were happy…and the world wasn’t.” 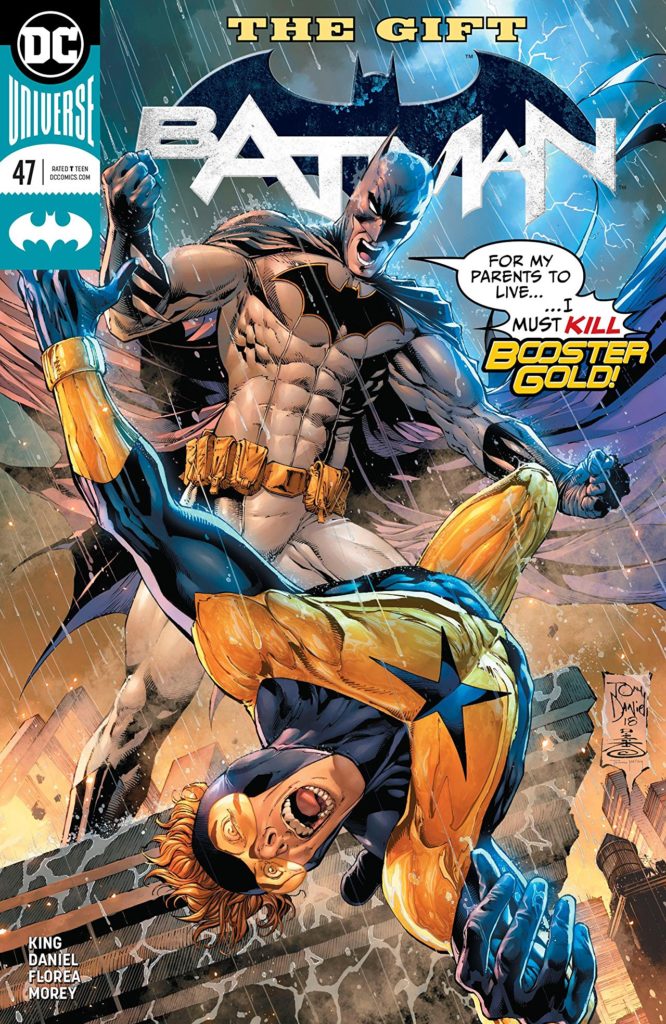 When a broken Booster Gold speaks those words to Batman in the finale of “The Gift,” it’s both a confession of his catastrophic attempt at a wedding present and also possibly an unintended bit of foreshadowing. Can Bruce Wayne remain our silent guardian, our watchful protector, our Dark Knight…IF he’s living happily ever after?

There’s nothing happy about the alternate universe Booster created in issue #45. As with issue #46, this one jumps “one year later” into the alternate future, with Bruce Wayne becoming a new man in the wake of the godless slaughter that Booster’s meddling resulted in. But this new man is no Bat-Man. He’s more like The Punisher; the lines on the chest of his body armor even subtly suggest the skull that adorns Frank Castle’s. (Not surprisingly, Bruce’s is black.)

When we last saw Skeets in issue #45, Booster’s robot buddy (and also his only hope of fixing this mess) had been smashed to pieces by a fireplace poker. Bruce has spent everything rebuilding Skeets, but he grudgingly needs Booster to activate Skeets’s sensitive voice commands. Bruce orders his emaciated captive to take them back in time just far enough that he can kill those he holds responsible for issue #46’s infinitely unhappy ending…and it works out about as well as everything else Booster has touched since this mess began.

If you thought the final pages of issue #46 were bonkers, writer Tom King cranks up the insanity in this one with even bigger stakes and bloodier outcomes. It’s not a spoiler to say that Booster eventually returns to present-day Gotham City, but at what cost to his soul? King’s portrayal of Booster in those final panels is haunting and heartbreaking, and those ominous words aren’t lost on either Bruce or Selina.

“You were happy…and the world wasn’t.”

Once again, longtime Gotham City resident Tony Daniel delivers some of the most indomitable work of his already incredible career. Bolstered by inking assists from Danny Miki and Sandu Florea, his pencils dramatically convey action and especially emotion with cinematic power. The faces and postures in the final panels say everything each character is feeling and thinking, and letter Clayton Cowles pulls us in even more deeply with such strategic emphasis that the dialogue practically reads itself out loud.

Much praise, too, to colorist Tomeu Morey, who adds handsome depth and detail to Daniel’s remarkable artwork. Once again I’ll compare his brilliant coloring to the teal and orange grading you’ll see in a Michael Bay Blu-ray, with the color taking over storytelling duties all by itself on a page that’s only Booster’s face. The art in these issues has been above and beyond.

In the hands of lesser writers, this three-issue detour into an alternate reality could have been little more than filler. But Tom King is smarter than that, crafting a weird, wild story that says big things about Bruce Wayne’s connection to Batman while adding even more gray to the already ominous clouds that gather above the upcoming wedding. Buckle up as we get closer to issue #50! In the meantime, enjoy the unpredictable ending of “The Gift,” right here in #BATMAN #47. – John Bierly