One of the touchstones of The Joker’s interpretation in comics is the first dozen stories featuring the Joker that follow his introduction as a cold blooded killer and his transformation into a clever prankster that would bedevil Batman over the years without falling prey to the morality police. There are a dozen stories that make up this initial introduction, so 9 parts to go after this. – Robert Reineke 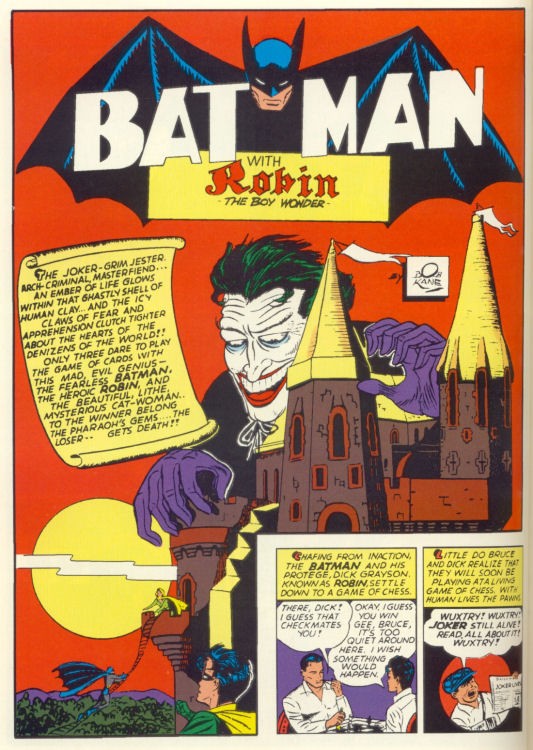 The Return: Gangsters bust the Joker out of the hospital to use his ideas for their profit.

The Skinny: The Joker is broken out of the hospital, he and Catwoman compete for the Pharoah’s Gems.

Other Mayhem: Hospital staff is roughed up and threatened by thugs, one police offcer knocked unconscious by impostor Batman, thugs poisoned with “sleeping potion” by an ungrateful Joker, thugs take on Batman and Robin while Joker beats a retreat, Joker threatens Catwoman with a gun, Robin takes a mace to his head courtesy of the Joker, Batman knocked off a balcony during a sword fight with the Joker, and Joker sets fire to mansion in an effort to get to Robin and Catwoman.

The Outthink: Batman chemically tracks Catwoman to, coincidentally, the Joker’s crime scene when they’re after the same gems.

The Comeuppance: The Joker is knocked out by Batman and left in a burning building while Batman, Robin, and Catwoman make their escape.

This is something of a mixed bag of a story. There really seems to be three plots running, gangsters using an impostor Batman as a distraction, Catwoman not telling Batman everything and going after the Pharoah’s Gems herself, and the Joker being free and going after the Pharoah’s Gems. Of the three, the Joker’s story is the least interesting as there’s little new in the Joker’s plot.

Crime Syndicate, Inc.’s gambit of using the Joker’s brains for their own ends is an idea that will be repeated over the years. Someone foolishly thinks they can control the Joker and they usually pay the ultimate price. That the Joker doesn’t work well with others will be well established over the years. And, considering the resources Crime Syndicate, Inc. has, including a hospital plane that can ferry the Joker around the country while he recovers, it seems like a totally unnecessary ploy.

The impostor Batman subplot is needlessly brutal. It does establish that the police think there’s something wrong as Batman is established as not ever directing lethal force in their direction, but the sequence comes off as gratuitous. Even by the standards of gangsters that Batman and Robin fight in the era, they’re an uninteresting bunch.

The Catwoman plotline is the highlight of the story. It’s a lazy coincidence that an in disguise Catwoman sees and overhears the gangsters make off with the Joker, but her story flows logically and in character from there. She divulges the minimum she can to Batman in return for her freedom, although Batman doesn’t trust her completely, she’s opportunistic and goes on to attempt the robbery while Batman is pursuing the Joker, she and the Joker do not get along at all when they encounter one another, she bargains for Robin’s life and then pulls Robin to safety when the Joker attacks Batman, and she takes the opportunity to escape with the jewel case when Batman’s busy carrying Robin to safety. Of course, the joke is on her as Batman has already removed the gems from the jewelry case, forseeing just that outcome. That’s a solid addition to Catwoman’s development.

All in all, other than getting the Joker out of the hands of the authorities, not much is really accomplished here. Another poisoning and another attempted gem theft is already starting to get repetitive. Establishing that he doesn’t play well with other criminals is a good addition, but there’s a reason this is a seldom reprinted story. – Robert Reineke

NEXT: “The Case of the Laughing Death!”

The Best Animated Batman Series Because it Is