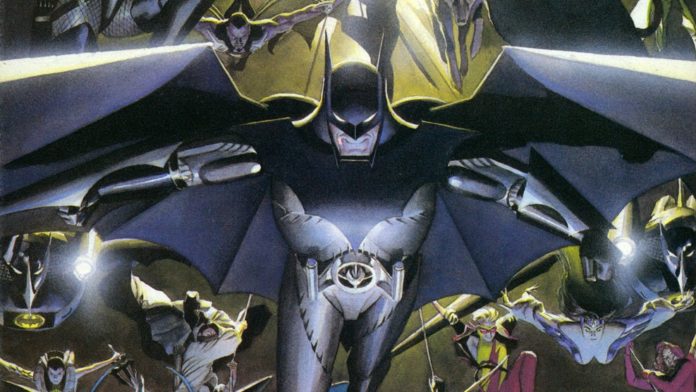 MARCH: The story arc “Contagion” begins in BATMAN: SHADOW OF THE BAT #48.

MAY: One of the greatest ELSEWORLDS tales ever – KINGDOM COME – begins with the release of issue #1.

Written by Mark Waid, with beautiful artwork by Alex Ross, KINGDOM COME depicts a future/alternative DC Universe where an aged – and outed as The Batman – still patrols Gotham via Bat-Drones.

JUNE: Pen and ink gets its due with the release of BATMAN: BLACK AND WHITE #1. The statues were great too.

OCTOBER: Dick Grayson finally gets his own ongoing series with NIGHTWING #1.

DECEMBER: Jim Gordon gets his first miniseries with the 4-part BATMAN: GORDON’S LAW.

JETT REMEMBERS
When it comes to 1996 and Batman, my most vivid memory is of KINGDOM COME. To this day, I’m still fascinated with that story and it’s take on an aged Bruce Wayne. I’d LOVE to see it get the animated movie treatment!

Other than that, I was consumed with any news about the next Batman film.

At some point in 1996, I found out – either via a newspaper (yeah, that was still a big thing 21 years ago) or ENTERTAINMENT TONIGHT on TV – that Val Kilmer was done as Batman and George Clooney – of ER fame on TV – was the new Batman on film.

I’m not going to lie, OK? I was more bummed about Val Kilmer no longer being the cinematic Batman than I was about Michael Keaton bailing after BATMAN RETURNS.

But, I was an ER fan back then and thought Dr. Doug Ross just might make a good Batman.

What did you think of “Batman in 1996” and what are your memories? Post your thoughts in the comments section below! – Bill “Jett” Ramey