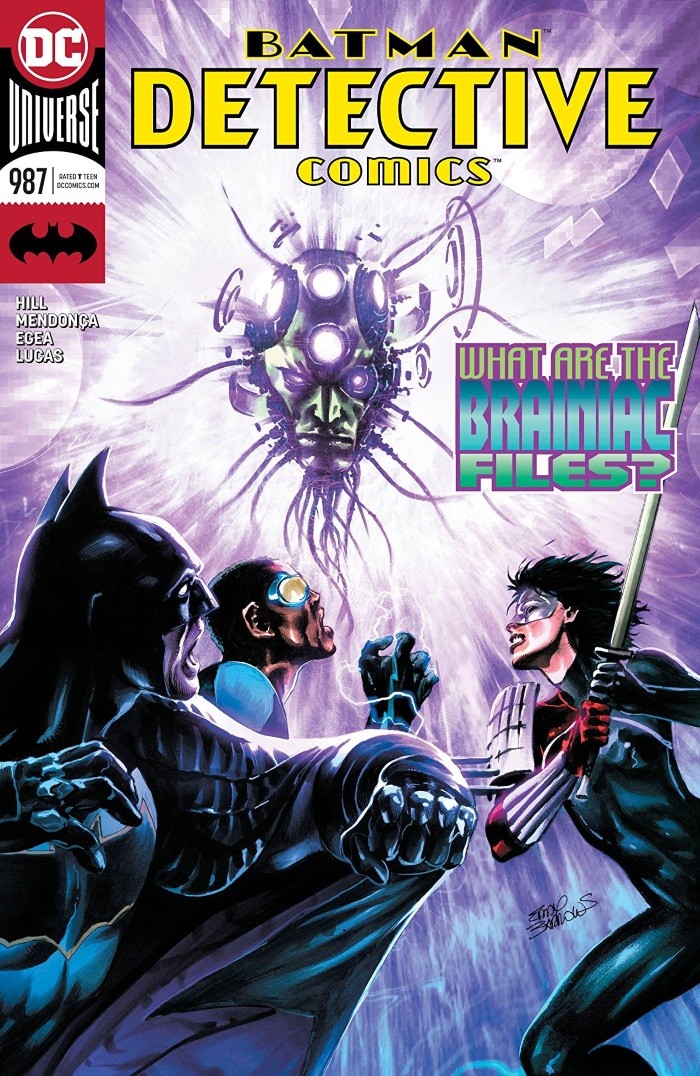 SYNOPSIS: Then, the pulse-pounding “ON THE OUTSIDE” storyline hurtles toward its cataclysmic conclusion! Batman has tasked Katana, Black Lightning, the Signal and Orphan (a.k.a. Cassandra Cain) with stopping a rogue operator using alien technology that can crack into any mind on Earth! What does this case have to do with the Brainiac Files seen in JUSTICE LEAGUE: NO JUSTICE #1? And how does Amanda Waller factor in? Guess you’re “outside” of Batman’s circle of trust…for now.

Here we are, Bryan Hill’s final chapter in his five-issue arc in Detective Comics.

This issue wraps up Karma’s story but also leaves the reader with much to look forward to.  Jefferson Pierce/Black Lightning has come into his own and gets rewarded for his troubles.  This issue is similar to the last with tons of wonderful Miguel Mendonca action panels that I have grown to love in this arc. Once it gets going it’s a non-stop thrill ride that reminds me of one of my favorite action movies of all time.

In my last review, I was a bit critical of how Hill had been writing Black Lightning comparing him more to a baby sitter than superhero. In this issue my criticism was met with wonderful results.  Black Lightning stands up to the Batman trying to showcase his worth as a leader.  Proving to be a valuable asset, he wasn’t alone.  The rest of the Bat-family followed suit, particularly the Signal. Unlike previous issues where the Bat-family was under lock and key they let it be known they want in on the action. They believe in the Batman as well as themselves. Jefferson and Duke are the shining examples.  They have a great moment between them that puts Jefferson’s leadership and compassion on full display.

It was a real pleasure seeing the Bat-family in the Batcave discussing their villain where he is from, his tactics and where he found his equipment.  Hill’s choice to bring Katana in the issue is a nice breadcrumb that will lead you back to Justice League: No Justice. That is just the right kind of connective tissue fans love and it’s not beating us over the head with continuity. (Take note of this DC Films). I can read Bryan Hill hostage stories all day they are that much fun. There is a sprinkle of Die Hard in this story. Villains invading a building in a major metropolitan city, taking out security guards, heroes pummeling mercenaries while saving a hostage and the day.  What else more do you want from a Batman comic?

Miguel Mendonca is always a welcome guest in Gotham.  I enjoy his panel layouts as much as I do his artwork.  Not anything particularly out of the ordinary just some clean sharp edges, slight angles to some panels, complimenting his artwork.  Mendonca’s action scenes stand out, Black Lightning’s grand entrance, the Bat-family storming the mercenaries just fantastic. Watching Katana slice and dice with her magical sword always a pleasure. Mendonca delivered an emotional Batman, often looking concerned yet stern. We are so used to seeing Batman standing tall against adversity. Yet there is one panel where Batman is hunched over his computer, talking about the hostage and the body language sells it, since the Dark Knight’s face is covered in shadows. The final fight with Karma has one splash page where Batman lets his villain inside his head and it’s spectacular, covering some of the greatest stories you’ve read. Bravo sir!

Together Hill and Mendonca have created a story about Batman and those closest to him. This Bat-family is strong and has really muscled through adversity since Rebirth began, not only from the villains but their over protective leader himself. Watching Jefferson Pierce question Batman’s partner methods early on, learning the ways of Gotham to finally standing up for himself and the team really pays off and he does get rewarded handsomely for it. Karma turned out to be an interesting new villain who was only a pawn of a greater scheme. If you are into hostage take overs and want to relive the glory days of 80’s action films you most certainly need to add this to you pull list this week.

The next time Detective goes on sale will be 9/12/18.  According to DCComics.com a brand new creative team follow Hill and Mendonca. James Robinson will be handling the writing duties while Stephen Segovia will provide the artwork. Until next time BOFers! – Pete Verra