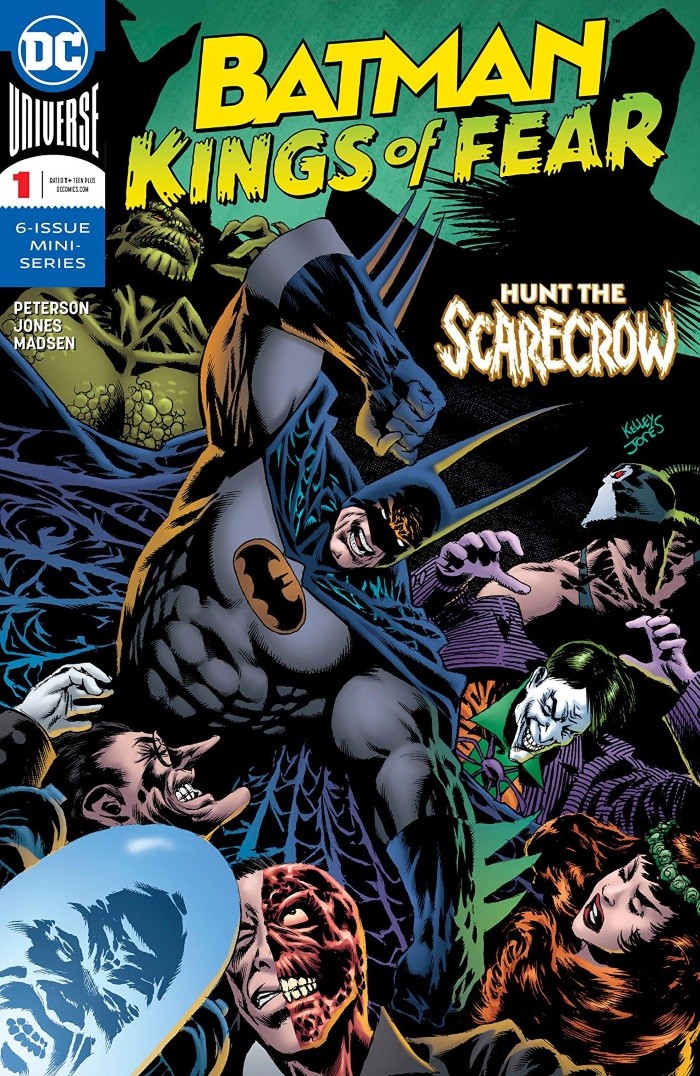 SYNOPSIS: Batman’s been overseeing Gotham City for years now and isn’t sure how much of a difference he’s making. Doubt, fear and insecurity are starting to take over. And as all of those negative feelings set in the Scarecrow orchestrates a riot in Arkham Asylum to give The Dark Knight one of his greatest challenges yet!

When I first laid eyes on the cover for Batman: Kings of Fear (KOF), I was immediately overwhelmed with the memories of my childhood and going to my local comic shop in the mid 1990’s to scour the shelves for the most recent issue of Knightfall, as Kings of Fear was written and drawn by the stellar early 90’s Batman team of writer Scott Peterson and artist Kelley Jones. The Knightfall saga was the first thing I ever really collected, and in many ways shaped and helped to define “my Batman”, along with Batman: The Animated Series. The cover depicts the definitive early 90’s Batman with long ears, yellow oval, grey tights, and the slight tint of blue on the black fighting all the major rogues: Joker, Croc, Freeze, Ivy, Penguin, and Two Face, with the omnipresent shadow of the Scarecrow lurking in the background.

The issue begins with a very familiar scenario: The Joker has taken hostages and is goading Batman to come out from hiding. This was “my Joker”, the playful, evil, and cackling clown that simply enjoyed the game he was playing with Batman. The Joker takes a hostage and promptly slits his throat because he “grows bored” after mere seconds, prompting Batman to burst out of hiding in all of his trunk-wearing glory. The art in this issue could be straight from 1992, as artist Kelley Jones thankfully didn’t attempt to modernize Batman, Gotham, or any of the rogues from how he drew them in Knightfall. In fact, one of the best parts of the issue was the first multi-panel page of the Joker that looked like it came straight from Marshall Rogers, as it was reminiscent of his stellar depiction of the Harlequin of Hate from the 1970’s. As I watched Batman take down the thugs and capture the Joker, I couldn’t help but think that I was reading an R-rated adaptation of BTAS based on the characterizations and aesthetic. Almost right on cue with my comparison, we see Batman taking the Joker to Arkham in what is almost a carbon copy of the BTAS Batmobile. A classic one sided dialogue ensues where the restrained Joker attempts to psychoanalyze Batman, telling him how liberating it is to not care if people live or die. A slightly humorous scene follows, as Batman responds with pressing one of those magic buttons prepared for any scenario, as a mechanical arm places a gas mask over his face and a “lavender” gas sedates Joker.

Upon arriving at Arkham, Batman is lambasted by the attending psychologist who gives him the “the actions of the villains are all your fault because you perpetuate them” lecture we’ve heard many times before. It is then revealed that all of the major rogues have escaped their cells, and in classic Bat-fashion, Batman kills the lights and promptly defeats all of the rogues, with the exception of one straw wearing, fear-mongering psycho who we find has escaped and taken a hostage. What happens next leaves our hero in the clutches of the Scarecrow, and leaves the reader wondering what his fate will be.

I am a huge Scott Snyder and Tom King fan. The way that they have written Batman these recent years, with all of the subplots, intricacies, faults, and brilliant twists that often change everything we thought we knew about the character have taken reading and defining the character of Batman to a whole new level.

However, there are many times I find myself missing the classic and simple Bat-stories that I grew up watching in BTAS or reading in one or (at most) a handful of issues. In this regard, KOF is refreshing for both how simple the story appears to be (so far), and how it visually hearkens back to the classic interpretation of Batman and his rogues that my fellow millennials and I grew up on.

With that said, the nostalgia will only go so far, and many of the storylines Peterson uses have been done time and time again. We’ve seen Batman capture the Joker only to be ambushed by the rogues in Arkham. We’ve seen Batman take down his rogues in exactly the same manner in one of my favorite BTAS episodes, “Trial”. We’ve seen the one-sided Joker dialogue time and time again.  While I enjoy the straightforwardness and simplicity of the story so far, I hope future issues take us somewhere original without rehashing old story arcs; especially those used multiple times since Peterson and Jones’ early 90’s run.

Overall, this issue is a must read for any Bat-fan who enjoyed the early 90’s depiction of the Dark Knight. Here’s to hoping we get some classic Tim Drake Robin suit action, or maybe even the old old-school Nightwing suit, along with some fresh plot twists in future issues. – Mance Fine

Mance Fine grew up in Longview, TX where he began reading Batman On Film on dial up internet at the age of 14. Having just turned 30, Mance resides in Austin, TX where he spends his days working for the state of Texas HHSC, reading lots of comics, loving Batman, playing bass for @anotherdesade, and loving the Dallas Cowboys more than Jett. Mance also loves his wife, and his dog and cat more than most people.