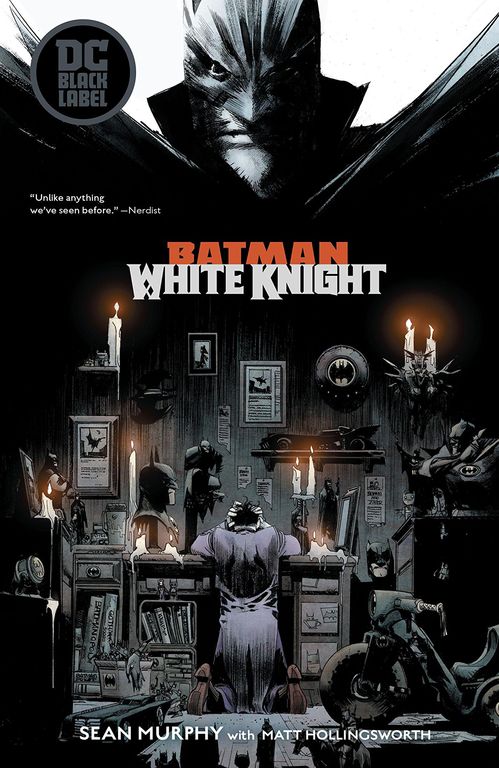 If you’ve been following BOF, then you know how much we’ve loved Batman: White Knight.

I was fortunate enough to review the book from issue #1 and enjoy the ride for 8 months. Finally, DC has released the trade so that those who have been waiting can dive in.

I don’t need to rehash the entire plot but here’s a quick synopsis: the Joker is reformed and is now seeing himself as Gotham’s White Knight, Jack Napier. Part of his new mission is to expose corruption within the city and gatekeepers, and The Batman is a high target. Meanwhile, a new threat emerge, and doesn’t like this new and improved Gotham citizen. Neo Joker takes it upon herself to bring chaos to the city, and force everyone’s hand.

Sean Murphy doesn’t seem like a Batman nut. I don’t mean that in a negative way at all. Through interviews and podcasts, it just seems like he doesn’t live and breathe everything Dark Knight (like all of us). He’s a really cool, chill guy that just had an idea for our hero. I think that’s exactly why B:WK is so refreshing. He was given the keys to the city and wasn’t bogged down by continuity, or “well that’s not how this character is supposed to be”, etc. He had an idea, wanted full creative control, and just went to town. What we got as a result is an original, energetic and relevant story. This is the Batman book we needed, and deserve right now. It confronts ideas and topical situations without being preachy or forceful. We can either make some connections to the current times, or just enjoy it as a piece of fiction. How deep we want it to be is completely up to us.

Murphy also has a unique style when it comes to look, and he belongs in Gotham City. His sketchy, shadowy panels create a distinct vibe for the metropolis that I don’t think we’ve seen before…yet it simply just fits. I love how he is able to go crazy and redesign every popular rogues villain. Each one is instantly recognizable, yet has their own special touches. Murphy also LOADS this series with so many easter eggs. In issue one, we get a nod to Batman ’89 in the Joker’s cell. The next issue we get a “who’s who” of Batmobiles in the Batcave. Later on, we get insane car chase sequences with nearly every popular Batmobile we can think of. Damn, this book is a blast.

I am so glad I was able to follow this book over 8 months. It was a blast and always left me excited for the next issue. Now that it’s collected in one trade, more fans can give it a shot (it’s only $14 on Amazon). I reread it in two sittings, and many will do it in one. The pacing is perfect, the art is superb, and the story is a breakthrough.

Batman: White Knight is my favorite comic book story of the past few years. Sean Murphy has earned the keys to Gotham, and I’m glad he’s returning for a sequel. You know we’ll be all over it. – Ryan Lower