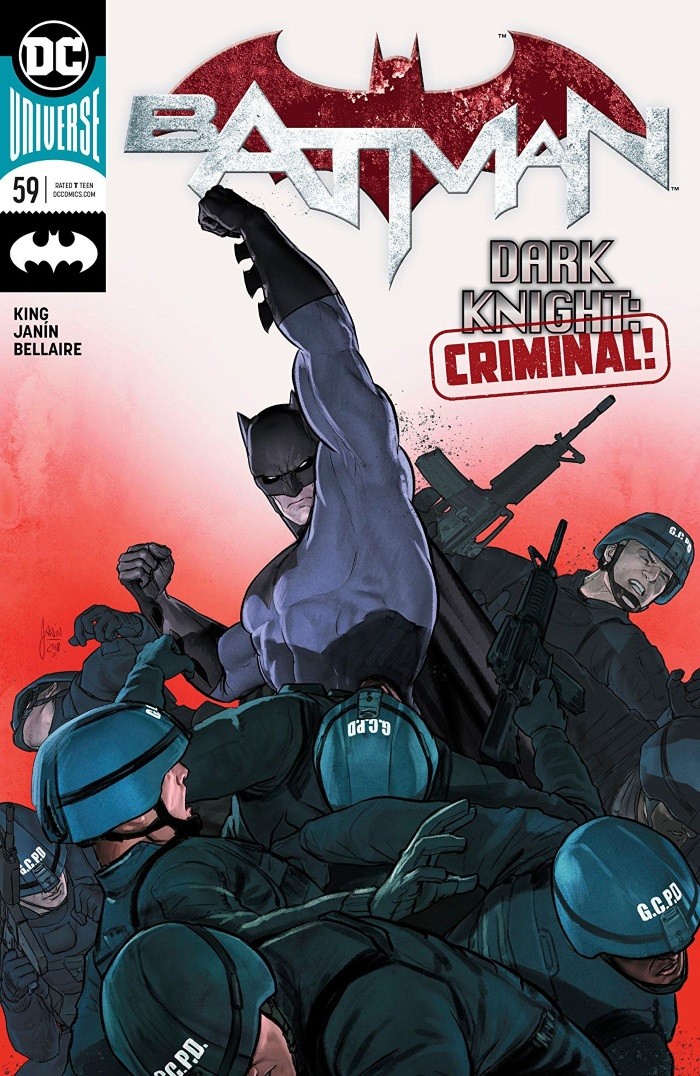 SYNOPSIS: Caught between Batman and his unseen enemy, the Penguin has to think on his feet to avoid being taken down by either side. If he chooses one way, he goes to jail; if he chooses the other, he ends up dead. Then again, the choice seems obvious. Is Batman ready for a new kind of avian sidekick?

“Believe me, or don’t,” The Penguin tells an unconvinced Batman of Bane’s takeover not just of Arkham Asylum but effectively of all of Gotham City. “But it is the truth.”

So Batman goes to Arkham Asylum.

And of all the trips he’s made there, this is one of the wildest, weirdest, and most utterly unpredictable yet. His first obstacle is a squad of guards who, if Oswald Cobblepot is to believed, are on Bane’s payroll. His handling of them is as “Batman” as it gets, but it’s nothing compared to what happens when he enters Bane’s cell.

You and I know that Bane is running things from the bowels of Arkham. But the man in the padded room cowers and communicates like a frightened child, literally begging for his mommy as Batman lays into him with everything he’s got. This is what Bane needs the world to believe is all that remains of the Devil of Santa Prisca, and it’s a performance that’s above and beyond convincing. So much so, in fact, that what if there really is more to this than we think?

Bane framed Mister Freeze for the murder of three young women. Bane had Dick Grayson shot in the head by KGBeast. Bane ordered the assassination of Alfred Pennyworth, which Cobblepot’s refusal to follow through on (because Bane killed Cobblepot’s wife!) has resulted in this very confrontation.

Batman is mad… and so is Jim Gordon.

You know things are bad in an issue when The Penguin is the only character you’re certain is telling the truth, and the big Batman/Gordon moment here seems so exaggerated that I think, and certainly hope, that it’s a ruse.

If it is, it’s done well. If it isn’t, it’s awfully harsh, and it hews hard toward the unpleasantness that writer Tom King has introduced into the book (but managed very, very well) since Selina Kyle disappeared on what was supposed to be her wedding night to Bruce in issue 50. We’ve seen the “angry Batman seething over a loss” thing so many times before, but King keeps coming at it from original, interesting, and challenging angles.

I also love, love, love, love how Bane is handled in this issue. How did Batman beat Bane back in the “I AM BANE” storyline? By letting him pummel him nearly into oblivion, because he’s Batman, because can take it. Is Bane doing the same thing here? We shall see. Maybe we already have.

Artist Mikel Janín and colorist Jordie Bellaire nuke this one from orbit. Batman has rarely looked so dangerous, and Bruce’s constant calculating of what’s happening around him comes through the cowl. The action is savage, with Bellaire equally mastering the sickly hues of the Arkham interior and the deep blacks and blues of Batman’s pages with The Penguin in Cobblepot’s inner sanctum. They also so capably succeed in making Bane look like a giant baby who’s lost inside his own mountain of muscles and mass that you almost feel bad for him.

It hurts to read this issue and see how Batman is playing into Bane’s goal of cutting him off from everything and everyone he holds dear. I’m just not certain that Batman’s as out of control as he seems. – John Bierly