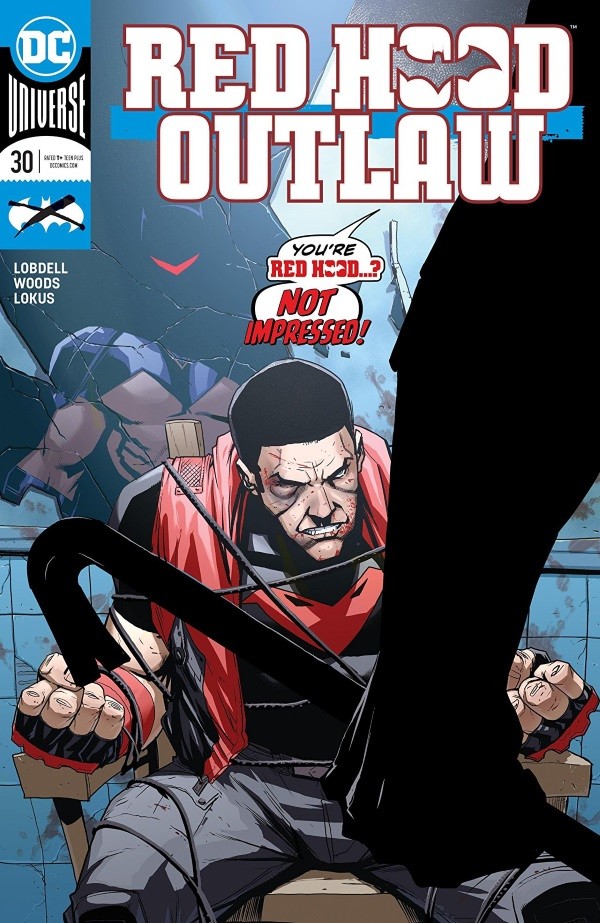 SYNOPSIS: Will the Red Hood’s latest campaign be his last? Jason’s hot on the heels of the drugs he and Arsenal recently tracked to Beijing, but instead of finally encountering the mysterious Solitary, he finds himself face to face with a figure from his past. Plus, who’s the new Wingman, and why’s he tracking the Red Hood? And how can he and Jason be in the same place at the same time? Find out in “Outlaw” part five!

I must admit that Jason Todd has always been my least favorite Robin, but his return as Red Hood has made for a very interesting addition to the Bat-mythos.

From his arc in “Under the Hood” to “Red Hood: The Lost Years” to his vying for the mantle in “Battle for the Cowl,” Jason has changed personalities almost as many times as The Joker.

OK, well, maybe he doesn’t change personalities “3 times before breakfast” like Mr. J, but he has been one of the most dynamic characters since his return courtesy of Ra’s Al Ghul.

In Red Hood and The Outlaws (RHATO) #30, we find Jason investigating a rundown prison that the locals seem to be terrified of. He easily discerns that something very, very bad happened there (hint: lots of blood is a dead giveaway).

As he traverses the prison in search of signs for his missing outlaws, he is captured by someone wearing his old Batman Inc. uniform and posing as “Wingman.” an old alias of Jason’s. The moment Red Hood starts to get answers is the moment someone throws a brick in his plans…literally! It seems Wingman was not the only person watching Jason, as he comes face to face with a familiar face…or faces?

I love when a writer is given sufficient time with a book or a character to really develop the character, and such is the case with Scott Lobdell. Lobdell has been writing Jason in RHATO since the title’s inception when DC launched the New 52 back in 2011, and it shows.

Jason’s quips and sense of humor are very on point, adding a bit of grim humor to the character I really enjoy. It’s the minor things that Lobdell does that really set this book apart from being “just another comic,” and so far, I am intrigued.

Lobdell gets bonus points for throwing back to both Batman Inc. and “A Death in the Family” with two very cool cameos.

As I did not have ample time to go back and read most of the series prior to reviewing this issue, I was very impressed with how drawn into the story I was, particularly due to being impartial to Jason. I am certainly excited to see what develops over the next several issues. – Mance Fine