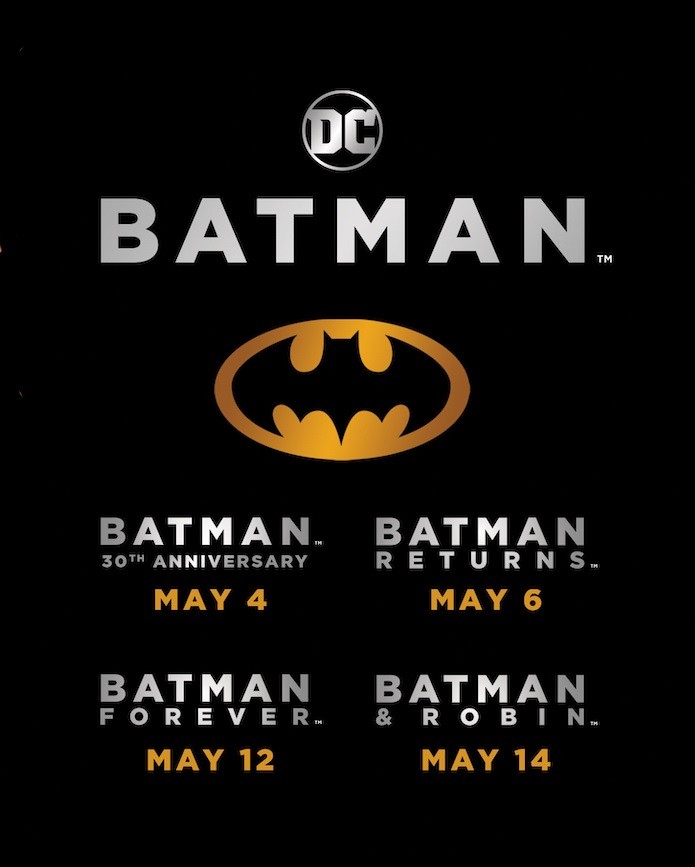 FATHOM EVENTS has announced that the first four Batman films from Warner Bros. — BATMAN, BATMAN RETURNS, BATMAN FOREVER, and BATMAN & ROBIN — will be returning to theaters for one day only as part of Batman’s 80th-anniversary celebration.

Tickets to each of the four “Batman” films are available beginning today at www.FathomEvents.com or at participating theater box offices.

Here are the preliminary dates and times: 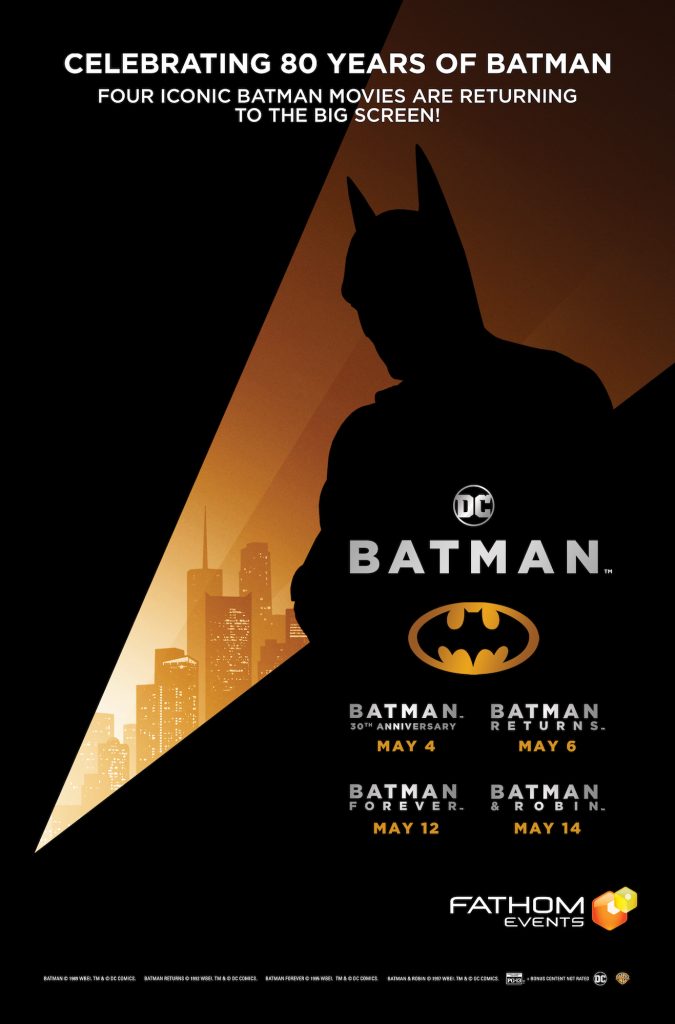 DENVER – April 5, 2019 – This May, only in movie theaters nationwide, “Batman” returns …  followed by “Batman Returns,” plus “Batman Forever” and “Batman & Robin.” All four blockbuster cinematic adventures are coming back to movie theaters as Fathom Events presents a can’t-miss “Batman” movie event in honor of DC’s Batman 80th anniversary.

Each “Batman” film will play one day only in more than 600 movie theaters nationwide, beginning with director Tim Burton’s visionary “Batman,” a film whose unprecedented success and acclaim helped propel superhero movies that continue to reign supreme at the box office.

Tickets to each of the four “Batman” films are available beginning today at www.FathomEvents.com or at participating theater box offices.

Warner Bros., DC and Fathom Events are offering movie and Batman fans alike a chance to see these blockbuster films on the big screen.  The schedule for this Caped Crusader cinematic celebration is:

“Batman,” starring Jack Nicholson as The Joker, Michael Keaton as Bruce Wayne/Batman, and Kim Basinger as Vicki Vale, also marks its 30th anniversary, making this Fathom Events presentation a dual celebration for fans. The top-grossing film of 1989 led to three sequels, all of which are part of the series.

In “Batman Returns,” both Keaton and Burton are back, along with Danny DeVito as The Penguin, Michelle Pfeiffer as Selina Kyle/Catwoman and Christopher Walken as Max Schreck in a film equally hailed as the first for its eye-popping visual flair and riveting performances.

Val Kilmer dons the Batsuit in 1995’s “Batman Forever,” along with an all-star cast that includes Tommy Lee Jones as Two-Face, Jim Carrey as The Riddler, Nicole Kidman as Dr. Chase Meridian, Chris O’Donnell as Dick Grayson/Robin, and Drew Barrymore as Sugar.

In 1997’s “Batman & Robin,” George Clooney is the Caped Crusader and O’Donnell is back as Robin, alongside such indelible performers as Arnold Schwarzenegger playing Mr. Freeze, Uma Thurman as Poison Ivy, and Alicia Silverstone as Barbara Wilson/Batgirl.

“The cycle of ‘Batman’ films that began with Tim Burton’s big-screen classic thirty years ago this summer is an amazing group of films that helped usher in an exciting new era of moviemaking,” said Fathom Events Vice President of Studio Relations Tom Lucas. “We’re honored Warner Bros. has turned to Fathom Events to celebrate the 80th anniversary of Batman with these iconic superhero films.”