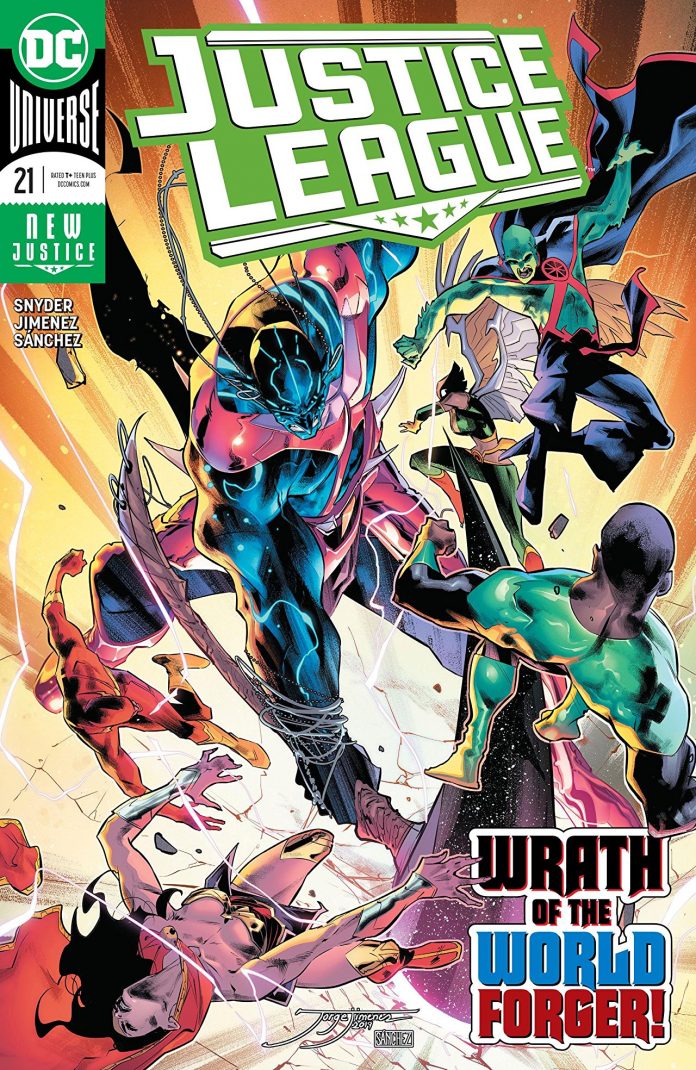 SYNOPSIS: The Justice League pulls back the curtain on their futures and learns that not everything is what they’ve seen. The team goes to confront the Justice League of Tomorrow for the truth, but can they handle it? Meanwhile, with his powers waning, Superman struggles to remain hopeful on a world with no sunlight.

Justice League #21 serves as the 3rd chapter in the “6th Dimension” storyline which has seen the team travel through space, time, and imagination to their future headquarters. There they oversee all of existence and it is seemingly perfect.

Meanwhile, Superman is trapped in a pocket universe designed to keep him with limited power and out of the action. His captor appears to be a future version of himself but all is not as it seems…

Scott Snyder and Jorge Jimenez continue their work on the series and the continuity in storytelling and art in this mini-arc is very welcome. The issue opens with two different one on one conversations; the first takes place in the heat of battle and the second in peaceful tranquility.

Superman is at odds with his future self, fighting for survival and escape and not faring very well. Snyder does a very nice job in this scene reinforcing the resolve of Superman and establishing that he is outmatched against his opponent. The conversation also serves to inform the reader that this is a conversation and altercation that has happened many times before, always ending the same way with Superman’s defeat. The visuals are dark and desperate with colorist Alejandro Sanchez utilizing muted earth tones to instill a feeling of dread.

The second is between Bruce and Dick in Future Gotham of the 6th Dimension. Dick, as the future Batman, provides some backstory on the status of the Bat-Family and on how Bruce ultimately perished in the final battle. Snyder and Jimenez give us one of the most carefree and relaxed interactions ever seen between the two characters, with both words and body language. While Bruce comments on it directly, the design of New Gotham and its color scheme portray a bright and joyful existence, standing in stark contrast to the Gotham we’re familiar with. This looks like a future where Batman’s core mission has been accomplished.

Of course, we know there is more going on here that it would seem and Shayne, the future child of Martian Manhunter and Hawkgirl, seems to be the only one willing to reveal its true nature. Before he can share the information, future Superman returns and does the job for him.

Since the cover kind of spoils the issue itself I don’t feel terrible letting you know that future Superman is, in fact, The World Forger and this existence is his own creation. However, it is a creation that requires the Justice League to make some very unheroic choices, choices that Superman would never allow to be made were he present.

There is plenty to like in this issue. Jimenez is one of the best artists currently working in the industry. His pencils are sharp, emotive, and dynamic. Snyder is clearly having a blast telling his multiverse-spanning tale.

The criticisms I have are fairly similar to those I’ve had in the past. For all the storytelling, we still haven’t moved along much further regarding what’s going on with Perpetua, although that may change in the next Legion of Doom centric issue. The details of the multiverse’s unraveling following her escape of the Source Wall are barely mentioned here. The nature of the 6th Dimension and the multiverse seems a little murky as well. Why is New Gotham located in the 6th Dimension instead of on Earth? If the League is rebuilding reality, why are they still forced to live with the troubling choices required to get to this otherwise ideal future?

Granted, there is a ton going on in this overall story, so not every issue will have space to address every detail, but we’ve been on this journey for some time and it feels like some of this should have been fleshed out by now. Instead, we get a few pages of Mera and Star Man battling Mr. Myxzpltk, although he didn’t seem to be in a fighting mood when last we saw him.

These panels seem to exist only to deliver a 4th wall-breaking gimmicky splash page that Snyder and Jimenez had in mind showing Myx un-imagining the universe, with the art dissolving from a fulling finished page down to the pencils and even Jimenez’s own pencil disintegrating. Maybe this section will pay off in the future, but it felt like a bit of throwaway fun when it could have been dedicated to something more substantial.

Overall this is a very good issue and one that can’t be missed if you’re following New Justice or are fans of these creators. – Garret Grev