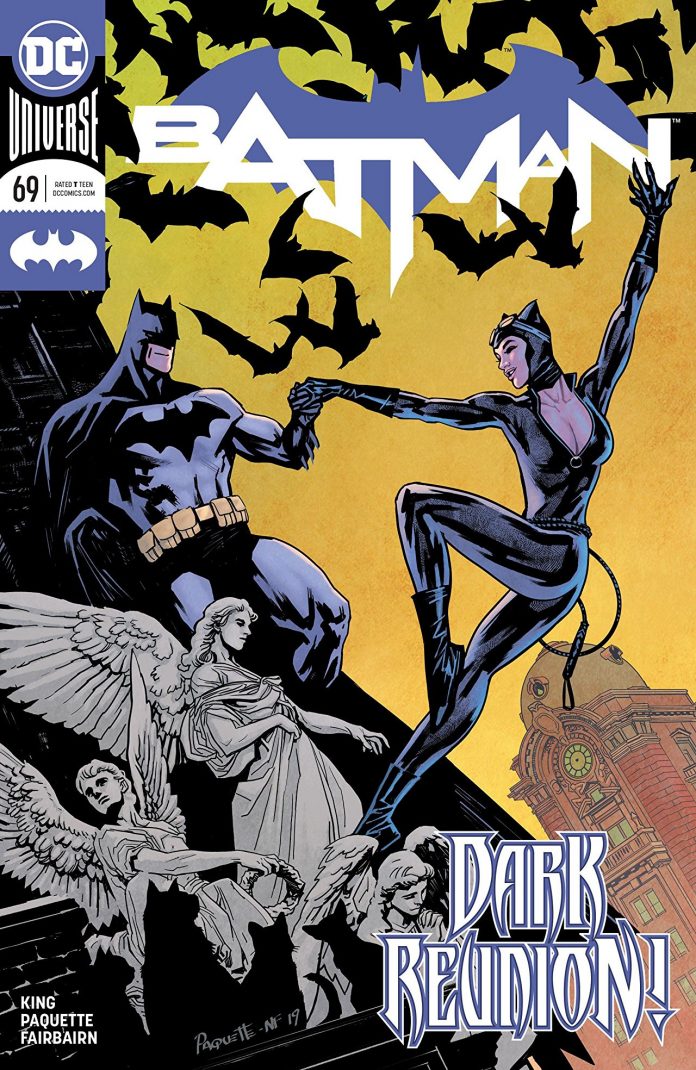 SYNOPSIS: The Dark Knight is breaking through the bad dreams and coming out the other side. But is he ready for the culprit waiting through the veil of terror? And what lasting effects might this whole ordeal have on Bruce Wayne’s psyche? With artist Yanick Paquette (WONDER WOMAN: EARTH ONE) jumping on board to tackle the art, “Knightmares” comes to a shocking close. This will be the strangest issue yet—a no-holds-barred journey through Bat-man’s psyche via the inner workings of Arkham Asylum, setting up the next big chapter of Tom King’s epic BATMAN tale. Batman’s future starts now!

After BATMAN #68’s bombshell ending that finally revealed Batman strapped into the hellish machine causing his “Knightmares,” Tom King is ready to pull back the curtain on who put him there… and why.

But before Batman can break free from this malevolent mental and physical prison, he’ll have to endure one last bad dream that calls everything he thinks he knows, feels, and believes into question.

We begin in a ballroom for two, lit from above by the romantic glare of glittering chandeliers. Sophie Tucker’s voice serenades Bruce Wayne and Selina Kyle with “Some of These Days,” composed by Shelton Brooks in 1910, first recorded by Tucker in 1911, and popularized by Tucker again (to the tune of a million copies sold) with an updated version (backed by jazz legend Ted Lewis and his band) released in 1926.

I feel so lonely
Just for you only
For you know, honey
You’ve had your way

If the lyrics sound familiar to you, you’ll remember that this was a signature song for Bruce and Selina in the bittersweetly beautiful BATMAN Annual #2, which told a possible future of Bat and Cat living happily ever after until death did them part.

When Selina takes a nervous Bruce’s outstretched hand with a smile, I heard yet another song playing in my head: Anne Murray’s “May I Have This Dance (For the Rest of My Life).”

Meanwhile, back in reality (or whatever it is that passes for reality in BATMAN these days, and I mean that as a compliment), another couple shares an entirely different kind of dance as “Flashpoint Timeline” Thomas Wayne and a hulking, naked Bane train together in a gym.

Each man goads and grapples the other, with the elder Wayne making it clear to Bane that he can only be nice for so long, just as Bane reminds Thomas that he loves breaking Batman regardless of who’s wearing the cowl. Their increasingly savage sparring intercuts with Bruce and Selina dancing through their history together.

As Bane and Thomas reveal disparate reasons for tormenting Bruce, Bruce lets Selina be his sounding board as he works through what’s happening to him (and he even confirms my theory about John Constantine’s guest appearance in #63). The World’s Greatest Detective makes short work of the mystery, and his solution for how to get himself out of it is genius.

But it isn’t that easy…

…because when his talk turns to their wedding night, The Cat pushes back at The Bat with questions of her own. And by the time Selina speaks her final words of this issue, Tom King’s script has brilliantly (and painfully) loaded what she says with a potential double meaning that will punch your gut and pummel your heart.

Is she right? Or is this one last twist of the “Knightmares” knife?

Yanick Paquette (BATMAN INCORPORATED, WONDER WOMAN: EARTH ONE) provides the artwork for this one, and it’s yet another tour de force for this arc that’s seen so many incredible artists realizing Bruce’s “Knightmares.” Paquette’s naked Bane looks especially dangerous and deranged, and his Thomas Wayne is handsome and virile; but what will really capture your eyes are the Bat/Cat pages, tethered by tendrils of musical notes that carry the “Some of These Days” lyrics aloft (letterer Clayton Cowles is doing some of his best work here).

The page layouts boast a clever variety of storytelling techniques, with colorist Nathan Fairbairn’s green, blues, purples, and golds deepening the staggering amounts of detail in Paquette’s characters and cityscapes. Stars shine inside The Batcave. We see Bruce’s and Selina’s faces reflected in the windows of buildings as if we’re watching them on television, and we feel the brutality of Thomas’s and Bane’s violent training session.

This is a deeply emotional issue that’s powerfully driven home by gorgeous artwork.

This is the final issue of “Knightmares” and Tom King has teed it up with some final words from Selina that will undoubtedly drive the remainder of his run.

Every time I think I know where King’s head might be at, he proves me wrong, and that lack of predictability is as frightening as it is exciting.