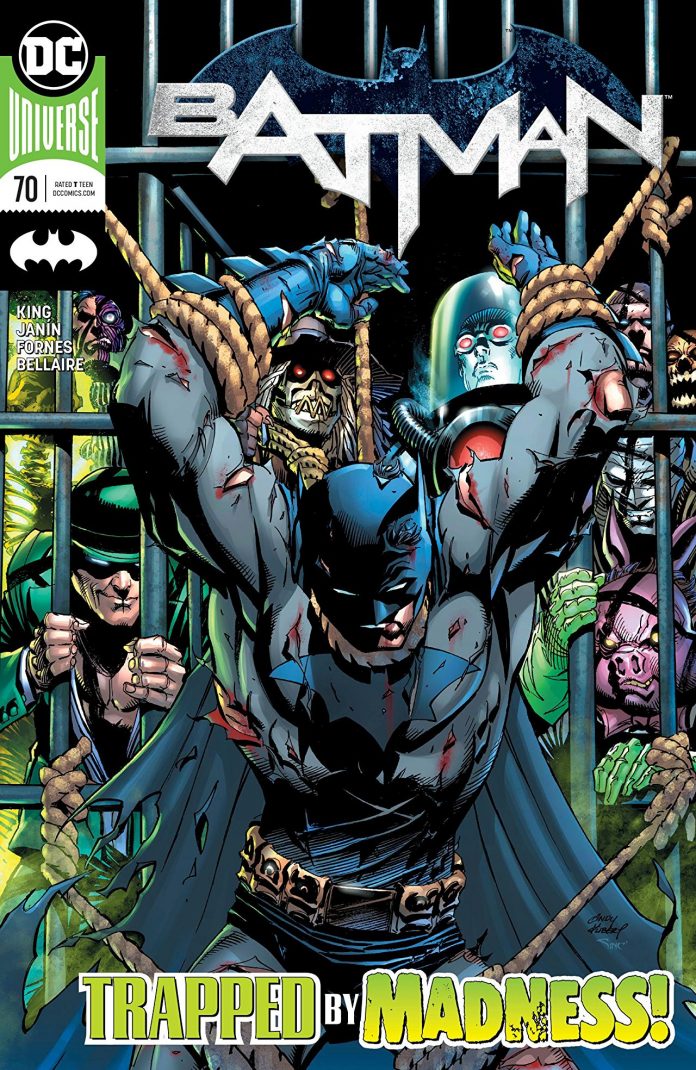 SYNOPSIS: “The Fall and the Fallen” begins! This is the one you’ve been waiting for! Now that Batman has escaped the “Knightmares,” he’s starting to see the forces rallying against him-and that his father from another universe has joined the other side. The Caped Crusader finally digs into the mystery of how Thomas Wayne, a.k.a. the Flashpoint Batman, escaped the collapse of his dimension and ended up in this part of the Multiverse. Get all the answers in this new five-part story paving the way for the next big BATMAN event!

The last words Batman heard in the mental and psychological prison Bane trapped him in were, “It’s time to wake up.”

And though his “Knightmares” have ended, they’re about to begin again for everyone who put him there.

Even though issue #70’s cover declares that Batman is “trapped by madness,” it’s more of a Rorschach situation where his captors are trapped with Batman, and believe me when I tell you that no one’s madder than he is.

Tearing himself like a beast from the wires and cables and tubes that bound him to the machine we first saw at the end of issue #68, Batman immediately finds himself greeted by The Riddler. But ever since “The War of Jokes and Riddles,” it’s impossible to see these two on the same page and not think about how Batman almost put a knife in Edward Nygma’s face (and would have, if not for The Joker’s intervention). All of Batman’s enemy’s know he won’t kill, but The Riddler will always have that little bit of doubt in the back of his mind, and I love how Tom King has added that layer to this dynamic.

Let’s just say that Eddie’s welcome wagon loses its wheels in a hurry. The hard way.

And so Batman embarks on sort of a reversed version of “A Serious House on Serious Earth,” taunting a listening but thus far invisible Bane while strolling for the front door and rolling through his Rogues like a freight train. At one point, he basically tells one of his foes (with much paraphrasing), “Every time you try to use your gimmick against me, I still end up punching you in the face, so let’s skip your gimmick so that we, and by ‘we,’ I mean ‘I,’ can more quickly and efficiently get to the part where I punch you. In the face. Seriously. Just stand still and let me punch you in the face.”

And that’s exactly how it goes down.

Page after page, merciless melee after bottomless beating, Batman finally reveals his plan to the last poor sucker standing… and I couldn’t stop laughing out loud with glee. It’s hilarious. And I mean that in the most loving and sincere and celebratory way, like when Bruce Banner joyfully told Thanos’s crew they were “so screwed!” when Thor showed up on the battlefield in AVENGERS: INFINITY WAR. It’s among the most audacious and ridiculous things he’s ever said. It may or may not involve a nap.

I’ll begin my lauding of the visual side of this comic with letterer Clayton Cowles, who deftly incorporates some big sound effects into the pencils and inks split between Mikel Janín (who draws the issue’s biggest battles) and Jorge Fornés (who brings home its more intimate ending like a champ). They move Batman through Arkham like a horror-movie madman, and Jordie Bellaire’s perfect palette pulsates across the pages. The variety of atmospheres she adds is matched only by her instincts in the hues she uses to make every punch pop; she knows when to hold back, and she knows when to cut loose. (The Scarecrow and Mr. Freeze pages are my favorites. It’s crazy how much she’s doing here.) As always, this is such a handsome issue to consume.

Writer/ringmaster Tom King has lost his mind, and I hope he never finds it. As fascinating and as imaginative as the “Knightmares” were, it’s good to be back to Batman’s reality, and it’s a bad, bad, bad time to be Bane. Next issue needs to be here tomorrow. – John Bierly