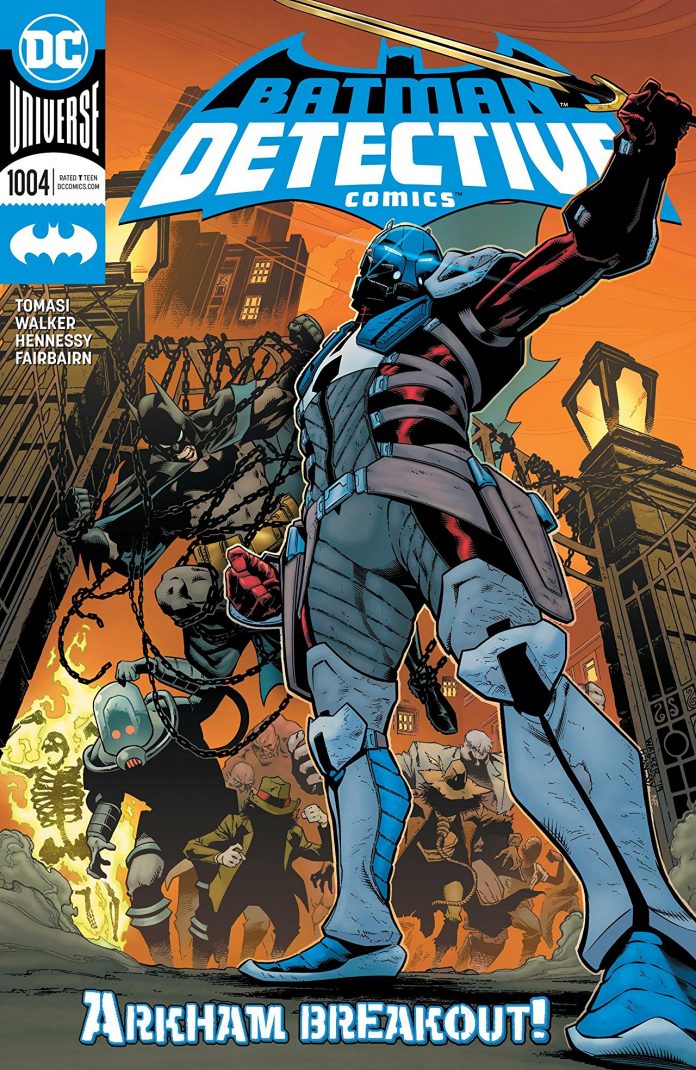 SYNOPSIS: The face behind the mask is revealed! Who’s taken up the mantle of the Arkham Knight? What’s their endgame? And what’s the shocking secret that Batman never knew about a part of his life he’d taken for granted?

Recently, Detective Comics under the tutelage of Peter J. Tomasi, has been an enjoyable action-driven story.

In Detective 1004, Tomasi tries to reimagine the Arkham Knight within the roots of our favorite nut house, Arkham Asylum.  Brad Walker continues to outshine Tomasi since joining the book with his action scenes, panel placement, Batman covered head to toe in shadows and one of the better Dr. Phosphorus you will see.

Tomasi has recreated the Arkham Knight for a new audience.  After the character was brilliantly brought to life in the Batman: Arkham Knight video game by Rocksteady Studios.  That Arkham Knight was gritty and audacious.  Tomasi’s feels a bit of been here before and even too “on the nose”.  The new Arkham Knight’s origin is part 80’s B-Movie horror meets weak versions of Talia from Dark Knight Rises and even sprinkle of Harley Quinn. Trying to show you how she was born “from whence she came”. You will get it when you read the book I promise you.  Thus, blaming Batman for the outcomes of her life. The new Arkham Knight is on a mission to break the Bat and you can’t help but say to yourself “Oh this again.”

While I was all on board for this new take on the Arkham Knight I must say this doesn’t really meet the hype and anticipation I had for the character.  From time to time a writer will try and dig deep into the lore and horror that was Arkham before Batman’s band of misfits took over.  Those stories like this feel a bit forced and even worn-out.

I will say that I have really loved what Tomasi has been doing with Damien.  This is a great take on the character and a breath of fresh air.  This I need more of, less of the snot nose brat.  More of the enthusiastic young Robin.  Tomasi’s Damien leans more towards Grayson than Drake and I am loving every word bubble of it.

Brad Walker continues his great artistic efforts yet again.  This issue particularly has a Batman in draped in shadows looking pissed off and poised.  Even the parts of the book that I do not like Walker does a great job illustrating.  Earlier I mentioned his panel placement, during the riot and the origin there are no panels and the art blends into each other.  A wonderful change of pace from what we normally see, love the creativity.  The riot/origin is up to par with what we have expected from Walker with action, brutal and detailed and while being the weakest part of the story the art picks up the slack dramatically. Walker gets a real chance to showcase his Gotham’s Rouges gallery with small cameos for a bunch of characters. Walker’s Dr. Phosphorus takes the cake, it’s like looking at the Fantastic Four’s Human Torch meets Batman Beyond’s Blight.

Overall this issue was a bit of a letdown.  I was really pumped for this one.  We got a solid tease last issue into the identity into the Arkham Knight. Just the cliffhanger you want going from one issue to the next, I couldn’t wait!  The origin just felt a bit played out to me.  I was expecting something a bit more renewed and edgier from a legend like Tomasi.  Brad Walker is on a roll and has yet to let us down.  The action is great, the artwork is detailed and beautiful and the best part of the book.  Saving the book from falling father than this bland story should have.  Every writer has a bad issue, I fully expect Tomasi to come back in ‘Tec 1K5 with a story that more to his level.