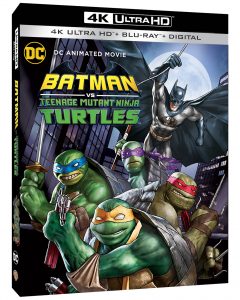 The clip shows Ra’s al Ghul and Shredder on a walking tour of Arkham Asylum and its Rogues Gallery of Gotham villains in all their caged glory. The voices include Cas Anvar (Ra’s al Ghul), Shredder (Andrew Kishino), Carlos Alazraqui (Bane), Tara Strong (Harley Quinn & Poison Ivy), Two-Face (Keith Ferguson) and Jim Meskimen (Scarecrow). The Joker doesn’t speak in the clip, but he is voiced by Troy Baker, who also voices Batman.

BATMAN VS. TEENAGE MUTANT NINJA TURTLES finds Gotham City reaching new levels of danger when Shredder joins forces with Ra’s al Ghul to enact a nefarious plan – leading to the team-up of the Dark Knight and the Turtles to combat the combined might of the Foot Clan and League of Assassins!