SYNOPSIS: Quentin Tarantino’s Once Upon a Time… in Hollywood visits 1969 Los Angeles, where everything is changing, as TV star Rick Dalton (Leonardo DiCaprio) and his longtime stunt double Cliff Booth (Brad Pitt) make their way around an industry they hardly recognize anymore. The ninth film from the writer-director features a large ensemble cast and multiple storylines in a tribute to the final moments of Hollywood’s golden age. 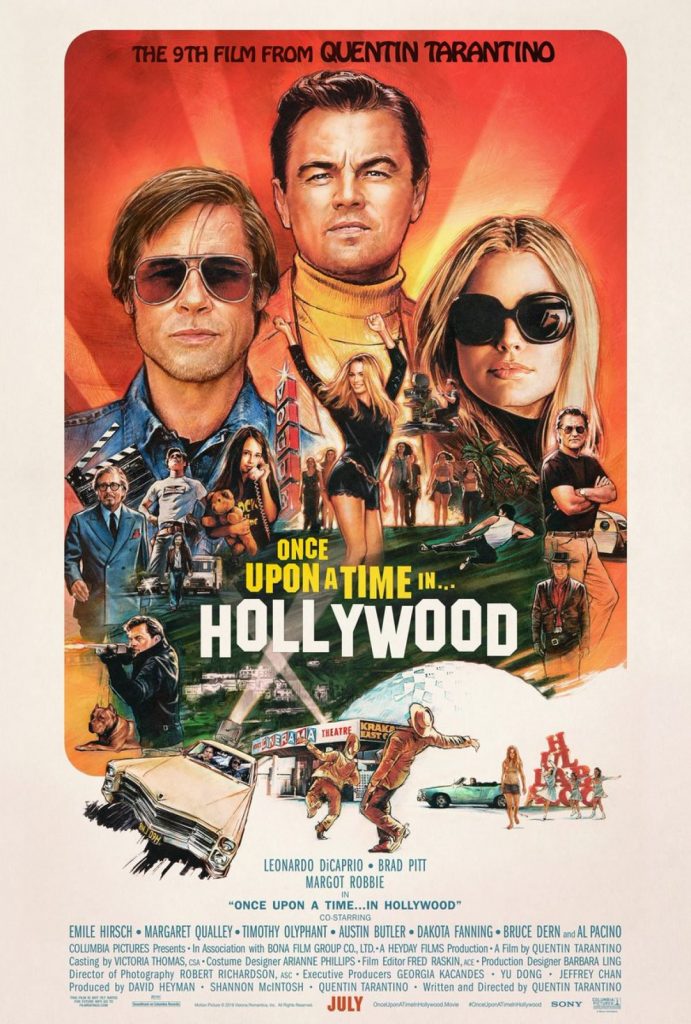 OK, all you Quentin Tarantino fans: Once Upon a Time . . . in Hollywood isn’t a typical Tarantino film.

And yet it is.

It has all the benchmarks of one, including extreme violence, profanity, dark humor, and exaggerated characters.

But it also has a surprising amount of sentimentality, nostalgia, and, yes, even gentleness.

Tarantino himself has referred to it as a “fairy tale”.

Set in 1969 Los Angeles, it’s bathed in the dominant colors of the ’60s: yellow, orange, avocado green, gold, and brown. It embraces the quirky tackiness of the time while simultaneously satirizing it. If you were alive in the 1960s and old enough to watch television and listen to the radio, it’ll be a nostalgic trip for you. You’ll recognize so many shows and songs. It made me want to get up and dance!

The strength of the film is its excellent casting. Tarantino hit the jackpot when he cast Leonardo DiCaprio as fading actor Rick Dalton, and Brad Pitt as Dalton’s stunt double Cliff Booth. Dalton acquired fame as the lead in a hit tv western called Bounty Law. When he tried to translate that fame to films, he came up short, largely due to his alcoholism. He’s now been reduced to guest star roles in various television shows.

All along the way, Cliff has served as his stunt double but now acts more as Dalton’s driver and “gofer”.  As Dalton despairs at his declining reputation, Cliff seems inexplicably content living in a run-down trailer with his dog, Brandy, and being of service to Dalton.

Cliff’s affable appearance and easy manner belie his ability to inflict maximum damage on anyone who dares insult or belittle him, even if that disrespect is only perceived.

When Dalton is offered a chance to star in a number of “spaghetti westerns” in Italy, he’s offended, but Cliff sees it as a chance to get back in the game. He’s Dalton’s biggest cheerleader, and their relationship is a tribute to every bromance film ever made.

Of course, it wouldn’t be a Tarantino film without parallel storylines, and being 1969, the choice of including the Charles Manson “family” and the Sharon Tate/Roman Polanski connection seems inevitable.

Margot Robbie brings Tate’s physical beauty and childlike joy to life quite effectively. Tarantino’s script treats her character with an optimistic, uplifting iteration, and that’s where the film’s gentleness comes in. Most of her scenes include friends Jay Sebring (Emile Hirsch), Abigail Folger (Samantha Robinson), and Voytek Frykonowski (Costa Ronin). However, her best scene occurs when she goes to a movie theater to view herself in a film she made with Dean Martin, The Wrecking Crew. Her unbridled joy as she watches herself on the screen becomes a high point of the film.

Alternatively, the Manson group of actors brings the threatening, malevolent, unbalanced undercurrent of evil to effectively create the film’s necessary suspense. Notable in that group are Austin Butler as Tex, Dakota Fanning as Squeaky Fromme, and Lena Dunham as Gypsy.

It’s Margaret Qualley as Pussycat who brings Cliff into contact with the “family” as a hitchhiker he picks up. When he learns she wants to go to a ranch used in the past as a set for westerns, both TV and film, including Bounty Law, he becomes curious about whether or not his old acquaintance George (Bruce Dern) willingly let them stay there. Cliff’s encounter with them is one of the most chilling sequences in the film.

A number of notable actors play parts in the film. Among them are Al Pacino as Dalton’s agent Marvin Schwatrz, Timothy Olyphant as James Stacy, and Luke Perry, in his final role, as Wayne Maunder. Nicholas Hammond brings a manic giddiness as Sam Wannamaker. Kurt Russell plays stunt coordinator Randy who also serves as the film’s narrator, providing crucial continuity for all of those storylines.

I’ll leave it to you to discover how all of Once Upon a Time . . . in Hollywood unfolds. It’s a long film at 2 hours 45 minutes, but a mesmerizing one. The juxtaposition of brutality and lyricism make it haunting, and the perfect cast makes it a potent tribute to old Hollywood.

Quentin Tarantino, in interviews, has called it his homage to Los Angeles, and we all know that LA’s biggest fairy tale is Hollywood.

I’d say that happy endings depend completely on your point of view and this film aims to create mixed reactions among its audience.

And it does so masterfully. – Jo Hyde