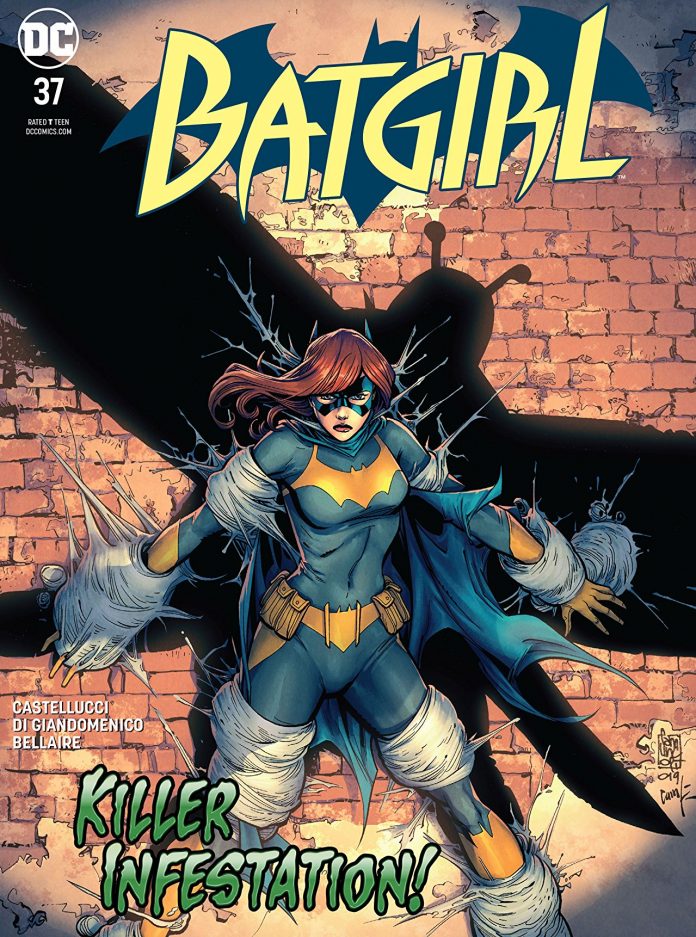 SYNOPSIS: Eager to prove himself as a guardian for the criminals of Gotham City, Killer Moth has set his sights on taking out one of Gotham’s finest heroes: Batgirl! Does this insect menace really stand a chance against Batman’s smartest ally? Meanwhile, after their daring escape, the Terrible Trio is on the hunt for new ways to cause trouble for Batgirl. Little do they know, Lex Luthor has already beat them to it and is about to bring Batgirl’s worst possible nightmare to life! Oracle is back online. And she’s angry.

This new story arc kicks off with the Terrible Trio embarking on a quest to find a secret lair hidden in the mountains, which is weird considering the last issue left them out for the count and presumably waiting to be taken into police custody. This could be explained away with a couple of lines of dialogue, but it feels odd to not even address what happened between then and now. The Trio doesn’t really know what they’ll find in this tech bunker, just that it’s probably valuable. We soon find out what awaits them: Oracle!

We then cut to Batgirl chasing Killer Moth through Gotham and feeling none too concerned about it. A battle ensues and Moth proves himself too be a much more formidable opponent than the chump who she’s handled easily before. He keeps referencing someone he’s trying to impress by taking down Batgirl. Eventually, an editor’s note reveals that it’s something to do with this month’s “Year of the Villain” crossover theme. Ok cool, don’t care.

This Batgirl/Killer Moth scene takes up the middle portion of the issue, broken up by a quick two pages checking in with Jason and Izzy going out to a rock show. Barbara is featured in only eight of this issue’s nineteen pages.

Call me greedy, but I could go for a little more Batgirl in my Batgirl comics. The Terrible Trio/Oracle scenes take up most of this issue, and to the artists’ credit, this is where the artwork is at its sharpest.

The issue ends back in this setting, with Lex Luthor showing up via holographic projection and looking like he stole the Red Skull’s wardrobe from Avengers: Infinity War. The new Oracle is a Seahawks fan, judging by her color scheme. That’s cool, I can dig it. Does an android really need built-in wedge heels though?

The new art team uses some digital effects in this issue — to mixed results. The Oracle lair scenes have some cool lighting effects. They’re fairly subtle and work with the high-tech nature of the setting. Conversely, the battle scene uses some effects for Killer Moth’s new weapons that really clash with the more traditionally inked artwork. There’s some green smoke spread throughout a couple of pages that is modeled in 3D and looks like it was pulled from the mid-90s animated TV series Reboot. The ice ray and tech-net don’t look so hot either.

So, I’m not exactly thrilled with the debut of this new creative team and story arc. Batgirl herself lacks the personality that has been a strength of the book in recent issues, but the scenes in the Oracle bunker are fairly intriguing, if only for the attention to detail in the artwork. I’m looking forward to further developments with this returning threat, and hopefully more Batgirl, next month! – Rob Veatch III