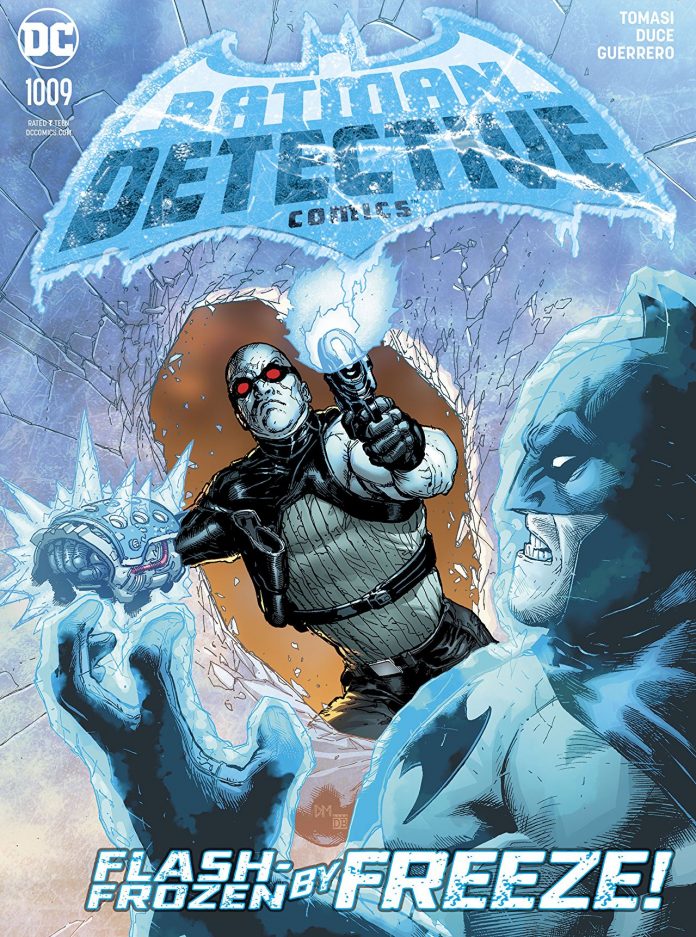 SYNOPSIS: “Take Your Shot” begins! Deadshot has returned to Gotham City following a long stint with the Suicide Squad, and Batman fears that without the oversight of AmandaWaller, Floyd Lawton will go back to his old ways. Meanwhile, after taking Lex Luthor’s offer, Mr. Freeze begins taking action to get exactly what he wants and killing anyone who stands in his way.

Detective Comics #1009 continues the vintage spinner rack vibes started in the last two arcs.  Tomasi has written a delightful “Brave and the Bold” tale co-starring Spectre followed up by a one-shot love letter to Batman and The Joker.

Now it seems like we are getting a story that could be Batman’s version of Kraven’s Last Hunt.

Artist Christian Duce whose last appearance on Detective was around the 950’s in Tynion’s run is back with vengeance.  The artwork in this book is Duce’s best by far, screenshots and posters galore! Let’s get into it!

I personally cannot get enough of Tomasi’s Alfred.  This version should be looked at as one of the best modern takes on the character.  Alfred’s opening monologue allows the reader to see a Batman engulfed in his work, while his father figure does his best to lead the horse to water.  With every word bubble, the reader can sense the relationship between these two.  There are similar moments to this scattered in the book and it is very encouraging to see.  Not since Scott Snyder’s New 52 run have we gotten quality like this between Bruce and Alfred.  Yes, Bruce and Alfred not Batman and Alfred. Tomasi is keying in on relationships when he writes and it will melt a Bat-fans heart.

Tomasi also writes one hell of a “trust fund” Bruce Wayne.  Bringing you back to when you first saw Bale sleeping in a board meeting in Dark Knight, or “faking” his drunken antics in Begins.  It’s flashy civilian Bruce Wayne at its finest.

The next classic villain that Tomasi is stirring up trouble with is Deadshot.  While the reader is still in the dark as to what exactly Deadshot is up too and who is flipping the bill for his services.  Tomasi does a great job setting up this ruthless villain and comes up with an airplane scene that is on par with Superman Returns and The Dark Knight Rises.

We get another “Year of the Villain” tease with Mr. Freeze at the end of the book, same as last week.  Not much is revealed here, seems like standard Freeze, looking for a cure to Nora’s illness.  Slowly but surely I suppose applies here.

The best part of Detective Comics #1009 is Christian Duce’s artwork.  It is just stunning artwork to say the least.  I enjoyed Duce’s artwork during Tynion’s run but it was Eddy Barrows who seemed to steal that show.   But wow, Duce has really stepped it up, action panels, splash pages, skylines, and backgrounds all come up aces this issue.  This book is above and beyond better than any of those issues drawn in the 950’s.  Batman has never looked better and that is saying something since Detective has had an impressive rotating door of artists.

My favorite splash page of the book looks down on Batman as he is standing over the edge of a building.  Looking as stoic as a king, first bloody at the knuckles clenched tightly with that beautiful Gotham skyline behind him. I’m a sucker for a good cityscape.    The panels of Batman “working” are spectacular.  Action heavy artwork dominates the book with ferocious punches, Batarangs, and thugs hanging from street lamps.  This is how Batman should be drawn in a comic book, brutal yet heroic.

Deadshot’s introduction was a thing of beauty and something out of a Mission Impossible film.  From target practice to the halo drop Duce drawing is so good you don’t need the word bubbles to know what is going on.  Then right on cue, it ends on a gorgeous splash page.  Duce is really bringing his A-game with these splash pages.

But that is nothing just flip a few pages for one of the better action scenes you will find in a book this month.  This was as great as any action scene you have ever read in Detective Comics without having “Batman” in it.  Displaying both sides of Bruce Wayne perfectly while combining some suspense and thrills of airplane heist films.  You will get vibes of films like Air Force One with a tiny sprinkle of Cast Away.

I honestly cannot remember the last time I read a comic and the final page left this engrossed for the next issue.  Tomasi has been really zoning in on stories that feel traditional.  While his rebranding of villains was good, this is what we have come to expect from Tomasi.

Who survived? Who is behind all this?

Looks like we have ourselves an old-fashioned mystery book on our hands and I cannot be more thrilled!  – Peter Verra