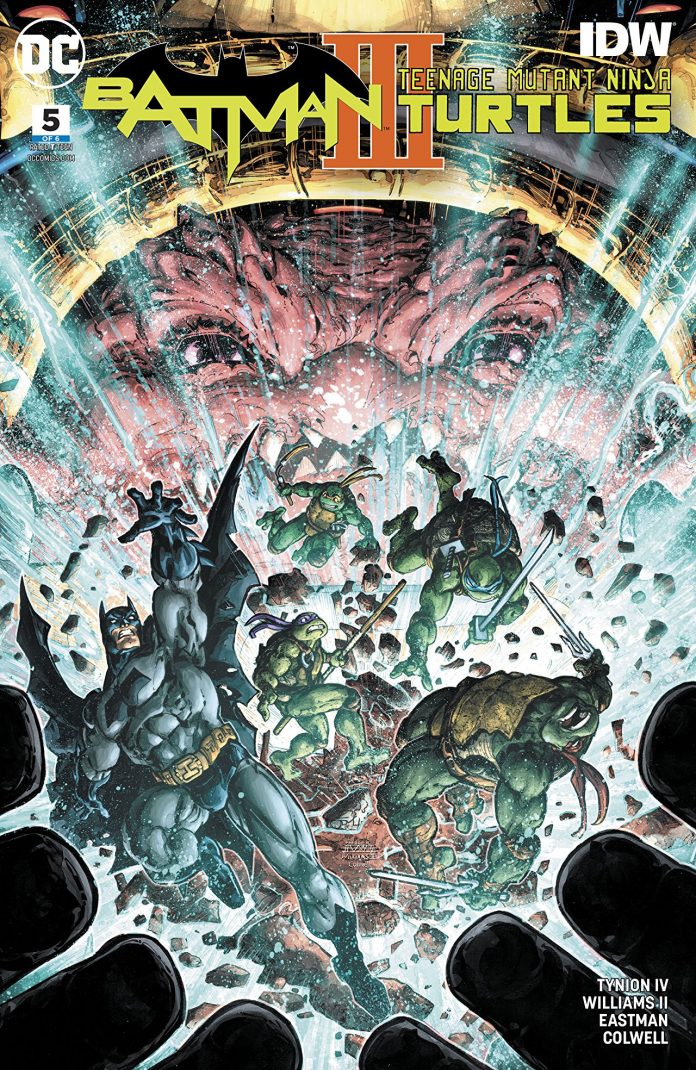 SYNOPSIS: Batman and the Teenage Mutant Ninja Turtles think they’ve figured out how to tear apart Krang’s Combined Multiverse and restore their reality. But Krang has planned this moment for years. With his robot army, he’s ready to destroy them all. And if Batman can’t remember the last missing piece in his life, there may be no hope left!

I don’t know if there’s ever been as much action in a single comic book than in this month’s BATMAN/TMNT III #5. No hyperbole there either.

Picking up immediately where we left off last month, there’s a massive invasion featuring Krang’s goons and the allies of the Batman and Ninja Turtle worlds. Now, it appears everyone is up to speed on THIS world isn’t the REAL world, it’s a race against time as Batman and the turtles try to fetch a mother box from The Joker. Then, they need to stop Anti-Monitor Krang so this omniverse stuff can be unplugged and turn everything back to normal.

While I may not understand the laws/physics/ rules of multiverse shenanigans, writer James Tynion IV still makes this book a blast. He spares no expense in giving us fans of these two worlds all of the fun we’d expect in a crossover event like this. He makes sure that Batman remains the leader of the pack, as he is the one who initially realized they were living a lie (and whose name is first in the title). Tynion also keeps every character true to themselves, most notably in a page where the turtles meet other versions of themselves (I laughed at this odd reunion). The author’s strength definitely comes in the smaller character moments, but also in pushing this narrative along so we never slow down and think “wait, what’s going on?”. Tynion is a fan of Batman, TMNT, and comics, and has blended all of these ingredients into a delicious nerd drink.

While the story is key, a visual medium like comics relies heavily on the images. Complementing Tynion’s writing on this book is the gifted artist Freddie Williams. He’s done every panel of every Batman/TMNT crossover book and has really pulled out all the stops in this book. With so much action on every page, it’d be easy to get a bloated, ugly blending of action, characters, and colors. But instead, every image is distinct and bursting with comic book flavor. I simply adore his design of the turtles and the characters from their world. Alongside that, his version of the Batman is responsible for the constant drool dripping from my mouth. In this book, Williams really gets to show off his skills with many members of each world coming into play, as well as different versions. In short, this issue is on the same level of everything before it: excellent.

The penultimate chapter of BATMAN/TMNT III is a relentless spectacle of action, character, and excitement. Usually, I’d say at this point wait for the trade, but here, track down each issue before and get on it before the finale next month. Turtle power! – Ryan Lower

Yeah, Robert Pattinson Really IS Working Out For THE BATMAN