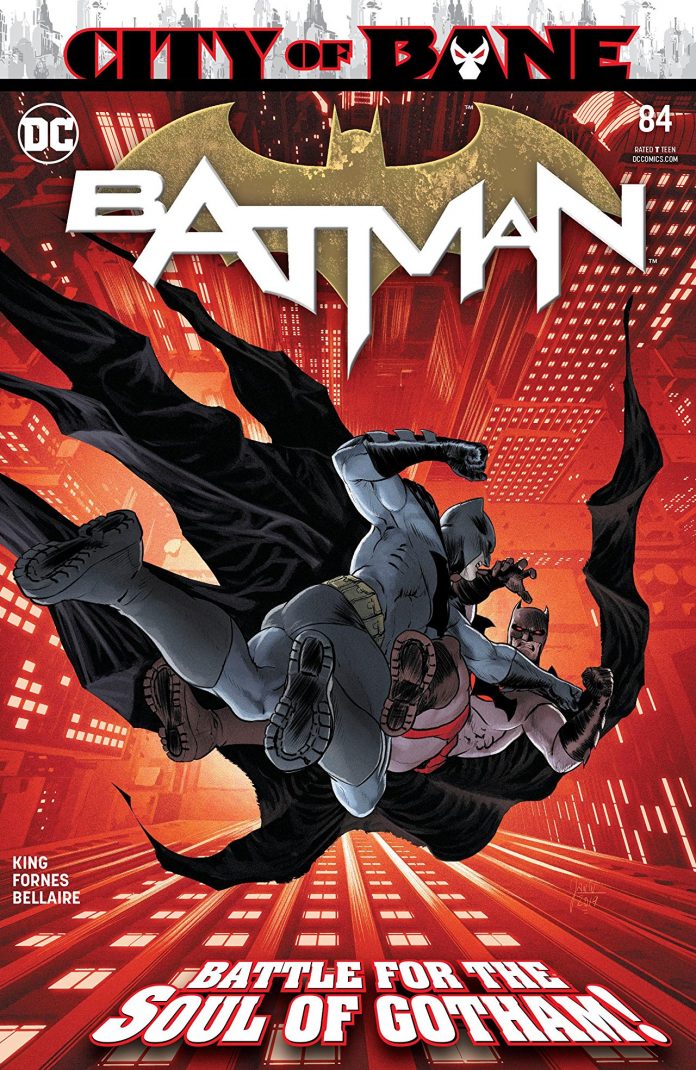 SYNOPSIS: “City of Bane” chapter eleven! The end is near as one victory leads to another defeat. As Batman reclaims his city from Bane, can he regain his sense of family? More specifically, when a man who is your father from another dimension has torn everything down around you, what will it take to build it back up? Especially when that man is currently staring you in the face and threatening to punch it. The final battle for Gotham City…and the cowl of the Caped Crusader…starts here!

“DARK KNIGHT RISING!,” declared the cover for BATMAN #83, which depicted Batman savagely lifting Bane above his head and violently raising his knee for a back-breaking blow. But Bane didn’t even appear in the issue, and the only thing Bruce Wayne punched was a wall.

Issue #84’s stunning cover (by Mikel Janín) shows Bruce and Thomas Wayne grappling in a melee-heavy free-fall into the crimson maw of Gotham City’s skyscrapers and streets below, in a “BATTLE FOR THE SOUL OF GOTHAM!”

Sounds exciting, right? And it makes sense after #83’s finale which pitted Bruce against Thomas “one more time, for Alfred.”

But the only punch thrown in the present day happens on the first page, and you can probably guess the puncher and the punched. And when that same punch gets a replay later in the issue, it serves as a bookend for the misery and murder that defines the secret history of how and why Thomas Wayne exists in Bruce’s reality.

This tenth chapter of “City of Bane” literally progresses the story by however many seconds it takes for one man to knock another down, and everything else is flashbacks.

I love the idea that Thomas Wayne has been sentenced by an enemy to live in a world where he has to see his son as Batman, and Thomas’s motivations since his first appearance as Bane’s main lieutenant in BATMAN #50 have been the clearest and best of any other character’s, including Bruce. Thomas just wants his boy to have a wife, a life, and freedom from the burden of the Bat, and he’ll do anything to make it happen. His shrewdness gains new depth in these pages as we see bits of the relationships, the losses, and the choices that brought him here, with writer Tom King showing us previous moments from his run in new contexts from Thomas’s perspective. That stuff is good.

From page one, Jorge Fornés’s artwork is so, so different from Janín’s in #83 as he picks up right from where the previous artist left off. His work has a rugged grit that recalls David Mazzucchelli’s street-level realism from BATMAN: YEAR ONE, and I love how his lines come alive in the ways he renders the various other-dimensional versions of Batman’s rogues. Jordie Bellaire, whose colors have inspired me to say over and over again that she’s this book’s greatest secret weapon, appropriately adjusts her palette to bolster Fornés’s details uniquely for each scene. Her work here is remarkable.

And yet, for a tenth chapter in a story that started out as a bonkers take on THE DARK KNIGHT RISES with the writer’s and artists’ imaginations as its only limitations, we’re still going issues at a time with only the slightest forward movement on the story. And with only one issue left on King’s run, I have no idea how all of this is going to turn out. I didn’t even talk much about the big death in my review of issue #83, because I’m still not sure it really happened. The long detours between big moments have made “City of Bane” (and much of King’s run since issue #50) a difficult and often frustrating read as single issues, and its biggest beats don’t always land because they’re so spread out.

That being said, I do think this story will read better as a collected edition, where all of these segues will feel more cohesive. It’s as if the covers are struggling to give the illusion of momentum by jazzing things up with characters and moments that simply aren’t appearing and happening inside.

I know that Tom King loves and gets Batman. I’m eager to see how he wraps it up. “I’m still here.” But I have to admit that it’s getting harder to convince those of you who aren’t. – John Bierly

GRADE: I don’t even know anymore

THE BATMAN Likely to Begin Filming in Early 2020 – UPDATED