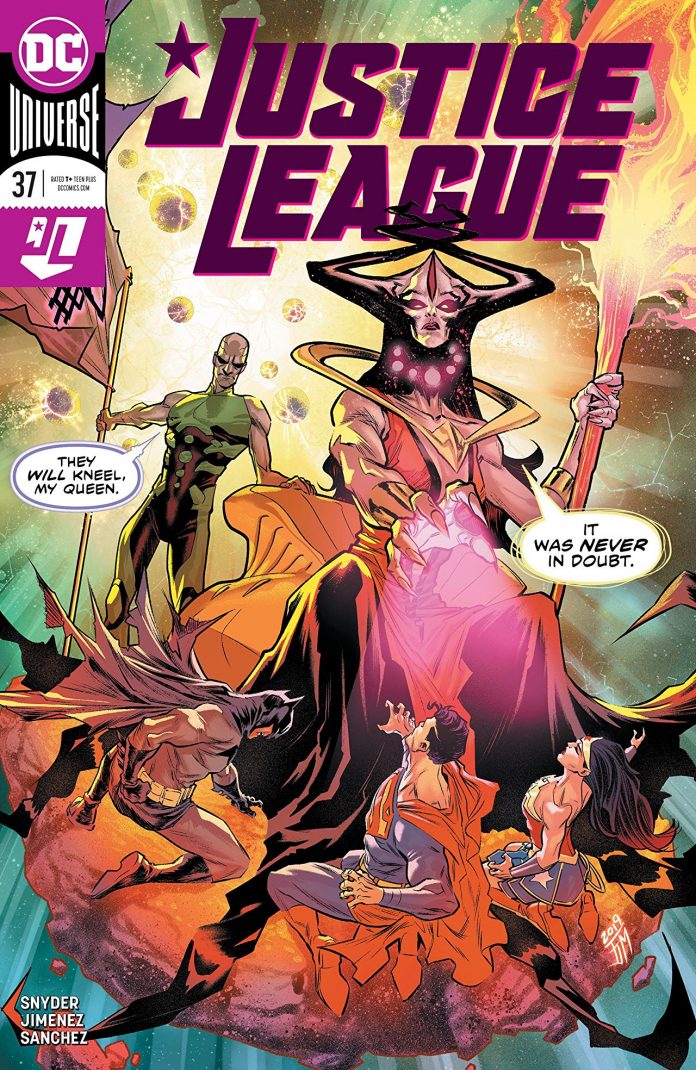 SYNOPSIS: “Justice/Doom War” part eight! The Justice League is making their final push against Perpetua, but some players they previously counted as allies may have been working for the other side the whole time! Who among Perpetua’s children will betray them and join Lex Luthor’s war on justice?

Well, following Justice League #36, I was all set up for the next issue to be the big knock-down, drag-out fight to end all fights in the DC Multiverse. It felt like nearly all the pieces were in order, or could be pulled in during the final chapter of the Justice/Doom War. It may have been a couple-issue long chapter, but it felt like we had reached the climax.

“Just you hang on there a little bit longer, eager readers!” Scott Snyder says! (Not actually, that’s not a real quote or anything. You get it.)

Who can blame him I guess? Snyder has been telling this story for a long time now, even while he was telling other stories throughout the DC Universe. I suppose we can grant him an additional issue to get all the characters and plot points ready for action…except I’m not sure it worked out all that well.

Now, this isn’t to say that I’m disappointed with the issue itself, I was just ready for what’s next. I don’t think he’s toying with the readers intentionally, but Snyder may have stretched this section of his tale out just a bit far for my liking.

The issue opens with the kick-off to the previously mentioned ultra-battle between the forces of Justice assembled by the League and Luthor and his alpha-predator army. We get a weaponized Hall of Justice taking on a weaponized Legion of Doom headquarters, which seems like it should be way cornier than it comes off largely thanks to the excellent art by Jorge Jimenez. Jimenez has been other-worldly on the books he’s drawn during this run and he’s continued that production level here. His action scenes are enthralling, his splash pages are gorgeous, and his panel work moves the story along with the kinetic energy of creation. All of that applies to the entirety of the issue.

From the introductory battle pages we move to the interior of the Hall where the core of the League (besides Batman who is leading the troops in the war charge) is conducting a sort of prayer circle/telepathic outreach program to break the power of the sigil of Doom and remind humanity that they have faith in Justice in the face of almost certain defeat. They’re looking to connect with the positive elements of creation to do so, but to pull it off they need Hawk Girl and Shayne’s connection to the Totality.

I say I’m not sure if things come together story-wise as well as Snyder intended because we don’t really understand how or why any of this is supposed to work. As the League rediscovers their faith and acts on it, the reader is also asked to go along with proceedings on faith. It’s a bit of an odd mix of not enough happening in this issue without enough clear communication around what is actually happening.

Getting Shayne and Hawk Girl reunited with the League also provides some resolution to the Monitor/Anti-Monitor/World Forger storyline, while providing a pretty cool display of Perpetua’s power as she hurls a planet like a deadly baseball through the universe. Luckily, the World Forger is at the plate ready to hit a home run and provide enough cosmic energy to send to get the mother and son pair back to earth with its power.

Without completely giving away the end of the issue, I’ll say that our heroes seem to find what they’re looking for, emerging from the Hall with their faith intact. The details are a bit fuzzy, but it seems like we are finally off to “The Big Showdown” as announced on the final page tease for JL #38.

While Snyder may have dragged the rising action of the story out a bit, he has certainly earned my trust by this point, but there are a few things in JL #37 that don’t quite land the way (I assume) Scott intended. I’m hoping for a bit more of the plot “why’s” to be made clear as we make our way through the story’s climax and resolution. Overall, this is a solid enough entry and will keep readers eager for what’s to come. – Garret Grev