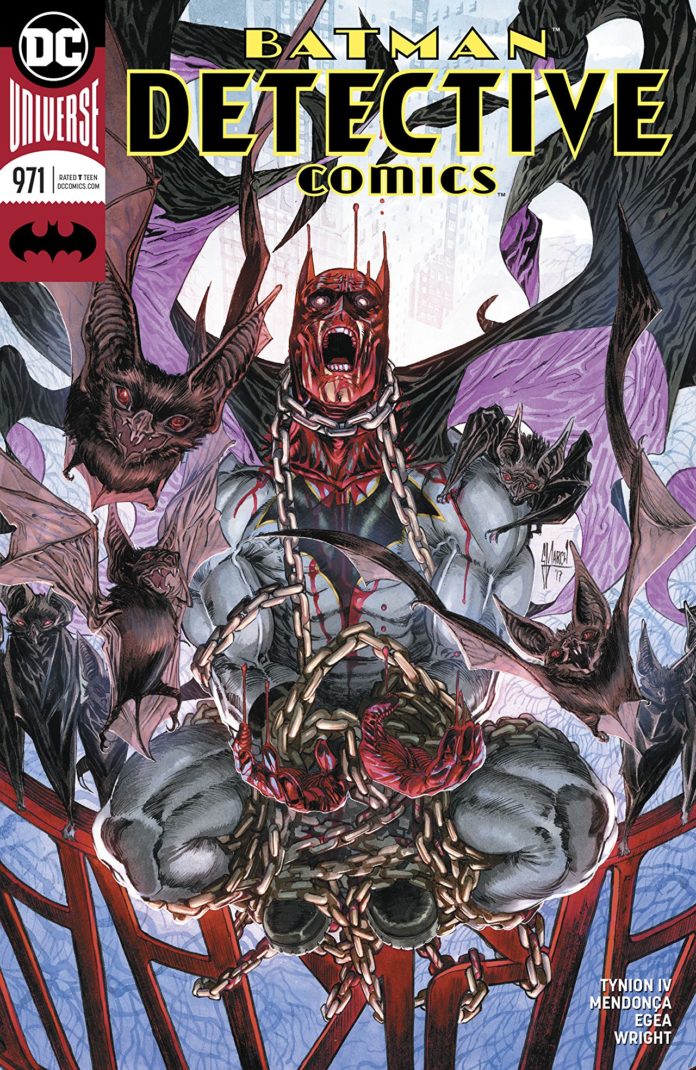 SYNOPSIS: “FALL OF THE BATMEN” part three! With the Victim Syndicate on the move and Clayface on the edge, the team faces a crossroads—but Batwoman believes she knows the way forward! The trick is…does Batman agree?

Detective Comics #971 is a rambunctious evening in Gotham City to say the least. Spoiler is continuously redefining herself with every appearance. The Victim Syndicate’s plan is taking full shape and looks to have Batman cornered. Artist Miguel Mendonca might have stolen the book with his stunning Batman poses and details. Not to be forgotten are the two very different yet very awesome covers. “Fall of the Batmen” part three has a little bit of everything for you to enjoy.

From what I can recall, the stories in Tynion’s run that I thoroughly enjoyed were the stories about the classic characters, Tim Drake, Cassandra Cain, Lady Shiva, Talia, Ras Al Ghul and Spoiler. Not so much the ones about new characters like the Colony. Well this story has changed my opinion on the Victim Syndicate. Their plan is pure genius and I loved the lead into it from page one. Creating tension in the Belfry that has reached an all time high. Could this be the moment that Bat-Drake warned us about in “A Lonely Place of Living”? Having worked in broadcasting for over ten years, I feel for this reporter and why she was pressured into having to take an assignment that only Lois Lane would want to cover. It’s little real life scenarios such as this that draw me into a book.

This new interpretation of Spoiler is amazing and stands out every time she graces the page. She no longer tries to impress the dynamic duo. She stands her ground with confidence. The scene with Spoiler, Batman and Red Robin discussing the riots around Gotham was tremendous. Spoiler is the most up to date on what is really going on by tracking social media accounts and a few steps ahead of Batman and his more “traditional” techniques. While some will argue this is Tynion breaking Batman down to build up someone else. I see this more like Batman absorbing information from the tactical team he put together, hence, this is why they are here.

I believe this is Miguel Mendonca’s first appearance on Detective. If I’m wrong please sound off in the comment section below. Miguel’s art is beautiful to flip through from the start. The opening scene with the terrified reporter, Spoiler/Batwoman/Red Robin in the belfry and Orphan talking about Clayface are all emotional scenes enhanced by his artwork and wonderfully drawn facial expressions. Tynion’s run has really been complimented on an emotional level due to the way the artist can draw facial expressions and Mendonca continues that trend. There are also a few panels that I would love recreated as statues, Batman in Arkham ready to fight has two great poses and the Clayface splash page at end the book.

Guillem March and Tomeu Morey provide the main cover to the book and it’s out of this world. Instantly I’m getting vibes from the horror genre and seemingly more inline with Eli Roth than the Caped Crusader. A bloody Batman chained upside down from the Arkham Asylum gate in pain while being swarmed by bats is terrifying. Turn the book upside down to get the full effect of the horror. I wonder why they didn’t flip it originally?

I will welcome back Rafael Albuquerque with open arms all the time. Like the main cover the setting is the same, the gates of Arkham Asylum. This time it’s a snowy night and amidst the storm there is Batman staring up at the Arkham sign while holding what looks like Mr. Freeze’s snow cannon. There is something about Batman being in the snow that I really love seeing, can’t place my finger on why but I love the visuals of the Dark Knight surrounded by white snow that is usually breathtaking. I’m sure it goes back to Batman Returns and even The Dark Knight Rises. For some reason I feel like I’m forgetting a specific movie, oh right, Batman & Mr. Freeze: Sub-Zero another snowy classic.

The issue has a good amount of fan service. The opening panels remind me of one of the Arkham games with Vicki Vale, the scene in Arkham Asylum brings me back to Batman Begins and we also get an awesome cameo by the red phone. I think the Victim Syndicate and the First Victim have come up with a plan that has Batman’s back against the wall and I’m dying to find out how this all plays out. I found this issue a real treat and highly suggest you add it to your pull list for this week. “Fall of the Batmen” part four goes on sale 1/10/2018 our first of the new year! I hope everyone has a happy, healthy and safe new year until then cool kids! – Pete Verra

The Mount Rushmore of Batman Villains