It’s Memorial Day 2022 here in the U.S. BOF salutes all those who served and gave their lives for our country.  BOF also thanks all those currently serving and our veterans as well — including my son, BOF contributor, and the guy who runs RAMEY REVIEW on YouTube, Micah Ramey who is currently serving in the USAF.

On a lighter note, for those celebrating Memorial Day this long holiday weekend, whatcha got planned and whatcha got cooking?  I marinated some turkey loins with a Shiner Bock and spice concoction and then smoked them using applewood.  I also made some Cajun dirty rice and a Shiner Bock/Tabasco Pepper Jelly BBQ sauce.  It did not suck.

On a personal note, Memorial Day each year kinda marks the anniversary of this website, and 2022 marks year 24 for Batman-On-Film.com.

Given the recent report about the new management at WB Discovery apparently being upset with Abrams for not coming up with finished products yet for his exclusive contract, do you think Zaslav will want to turn to a different creative team to handle Superman?

JETT SAYS: I have no idea. I will say that I’ve always doubted that the J.J. Abrams-produced Superman film project would ever happen.  Well, shall see on that one.

If I had to guess (hope), Superman will get “THE BATMAN treatment” under a filmmaker and do for The Man of Steel what Matt Reeves did — and his continuing to do — for The Dark Knight.

Which BATMAN run did you enjoy more: Scott Snyder or Tom King?

Oh, I thought you asked me who my favorite Batman writer is…my bad. Scott Snyder’s, definitely…though I did like King’s run as well.  I think both started out with a bang and ended rather meh, if you will.  But yeah, I’ll go with Snyder because he did contribute something iconic to the Batman mythos in the Court of Owls.

Off-topic, Bill, what was your max bench during high school, and what are you benching these days?

JETT SAYS: HA!  This is definitely an off-topic question!  Back in my football playing days in the early 1980s, my max bench press was 275. My highest ever came early in my coaching career in the early 1990s and was 325.  Today?   I have no idea because I haven’t “maxed out” in years.  I’m more into functional strength training and cardio nowadays.  I have a small home gym and I’m obsessed with Beachbody On Demand and my treadmill.

What are your top five favorite Batman cowls in live-action?

JETT SAYS: The cowl Robert Pattinson wears in THE BATMAN is definitely my favorite now.  I love how it is supposed to look like Bruce Wayne made it himself and it’s leather instead of rubber.  After that my faves are — in no particular order — Adam West’s from the 1960s BATMAN TV series, Michael Keaton’s from BATMAN, Val Kilmer’s from BATMAN FOREVER, and Ben Affleck’s from BvS. 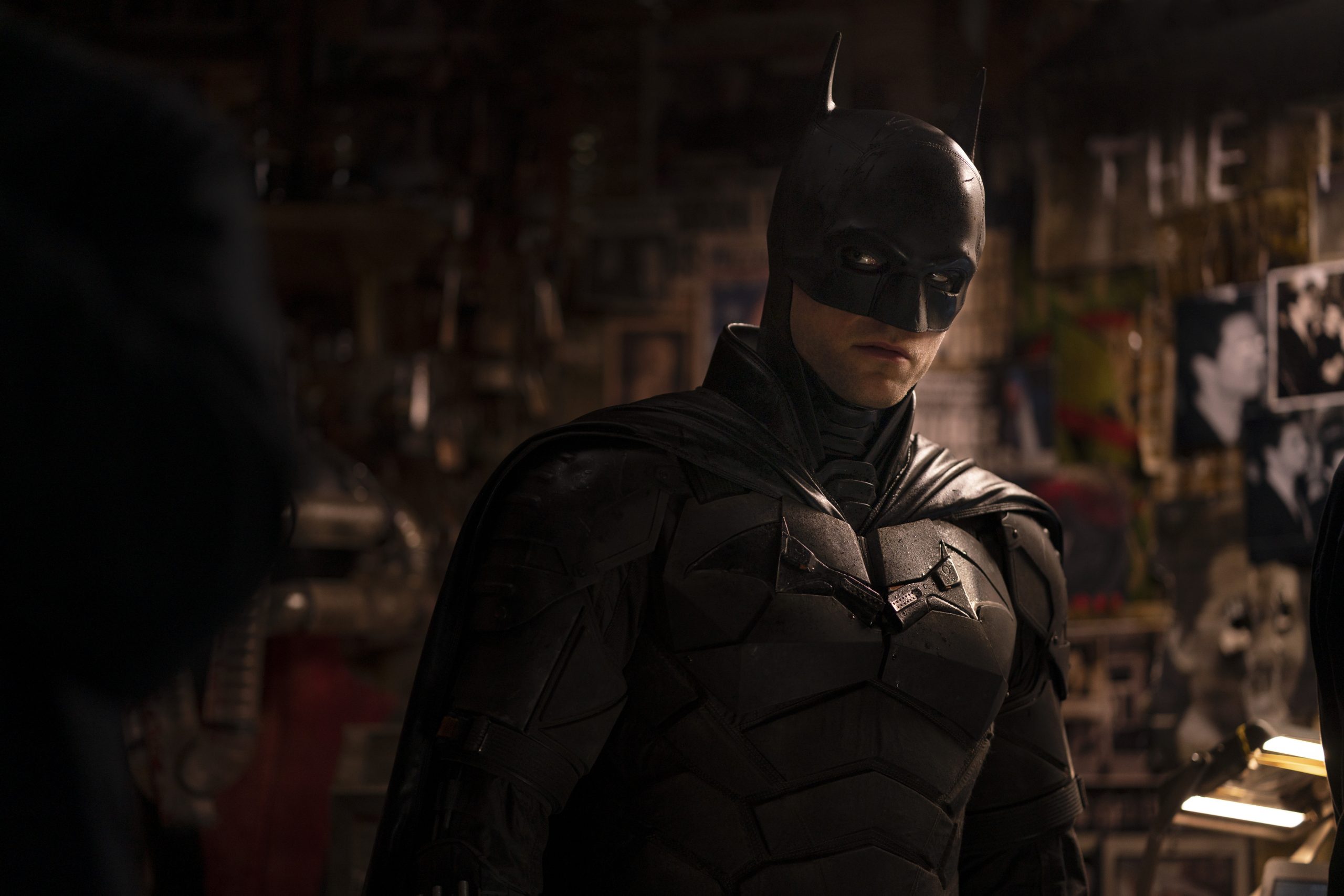 JETT SAYS: I have a pretty boring answer when asked questions like this, but my answer is a very honest one:  Whatever Matt Reeves wants to do and whichever characters he wants to use in sequels.  If I had to pick one character, I suppose I’d like to see what Matt Reeves could do with Dr. Hugo Strange.  With the HBO Max spinoff series set in Arkham, I think it’s very likely the character will be introduced in it…maybe even Dr. Jonathan Crane too.

Have you heard about any other original “Black Label” projects outside the “DCEU” besides the upcoming Superman project?

JETT SAYS: I have not.

Which D-list (or super obscure) Batman characters (villain or hero) would you like to see in live-action?

JETT SAYS: Are you setting me up to say Crazy Quilt?!  Does Batman even have D-list characters?  Honestly, I’ll repeat my answer from a few questions back…whichever characters Matt Reeves wants to use, I’ll be good with ’em.  But for fun, what about Bruce Wayne having a dog named “Ace?”

How do you think the plans for DC on film will change with the Discovery merger?

JETT SAYS: It appears that movies based on DC characters will be made for the big screen only and not HBO Max.  I believe that they are going to keep on doing what they’ve been doing since Walter Hamada came on board to helm DC on film: Make the best movies possible and not worry about whether they “connect” or not.

What’s your Elvis music collection look like these days? I started off with cassettes back in the ‘90s, moved to CDs, eventually started buying digitally, and now I’m getting into vinyl. What artist outside of Elvis are you looking forward to hearing on the new movie’s soundtrack?

JETT SAYS: Dude, I started out with vinyl WAY back in the day and still have all of my old records.  Of course, I went to CD’s in the late 1980s and still have all of them.  Nowadays, when I listen to Elvis I do so digitally…for the most part.  I mean, it’s super easy to say, “Alexa, play ‘Heartbreak Hotel’ by Elvis,” you know?

You mentioned several times that the Batfleck solo film was gonna be a prequel to BvS. Was it just wishful thinking?

JETT SAYS: For one thing, I couldn’t care less about the Batfleck solo film because it’s not going to happen. Secondly, I couldn’t care less about BvS.  But to answer your question, I never said it was definitely going to be a prequel.  I said if I was doing it, I’d set it before BvS because Affleck could’ve played a younger, in-his-prime Batman and wouldn’t have to be restrained by continuity as established in BvS.  It’s a moot point now anyway.

What’s your opinion? Does The Riddler know Batman is Bruce Wayne in THE BATMAN?

JETT SAYS: It’s not only my opinion, it’s fact: The Riddler does not know that Batman is Bruce Wayne.  The confrontation scene at Arkham makes it clear.  Going into that scene, Matt Reeves wants the audience to believe Nashton knows Batman’s identity. Even Batman believes the jig is up and that The Riddler knows (“I think this is all coming to an end.” “What?” “The Batman.”).  But when The Riddler tells Batman that Bruce Wayne was the only one of “their” targets that they didn’t “get,” Batman realizes Nashton does not know.

If the ELVIS biopic isn’t good, are you going to start Elvis-on-film.com?

JETT SAYS: I think ELVIS is going to be great…and I have enough on my plate with BOF!

However, I do have a page on BOF devoted to my coverage of the film…check it out HERE!

Is there an item or piece of Batman merchandise that you really want but don’t have yet? If so what is it?

JETT SAYS: I’d love to have a prop or something used on the 60s BATMAN TV series.

Been seeing a few places say the next Batman movie is Fall 2024, but haven’t seen it officially announced, is this real? Also as a fellow Elvis fan, how stoked are you for this new movie? It looks good!

JETT SAYS: I’m 99.9% sure that THE BATMAN sequel has not been given a release date nor a date for the start of production.  My educated guess is that it’s going to be a 2025 release.

As far as ELVIS, dude, I’m as excited for it as I was THE BATMAN!

Hi Bill! What was your absolute WOW moment in THE BATMAN? Mine was the whole intro/declaration of intent. Keep up the good work, you still are my daily dose of Batman quality news!

JETT SAYS: Can I answer by saying the entire film lol?!

The moment in the film that hit me in my Batman fan heart the most was when he reached out to save those people trapped in the water and the kid was the one who took his hand!  That entire segment at the end of the film after he beat the shit out of that last Riddler follower through his final voiceover/journal entry was awesome. Do you think Tom Cruise will win the “Best Actor” Academy Award for TOP GUN: MAVERICK?