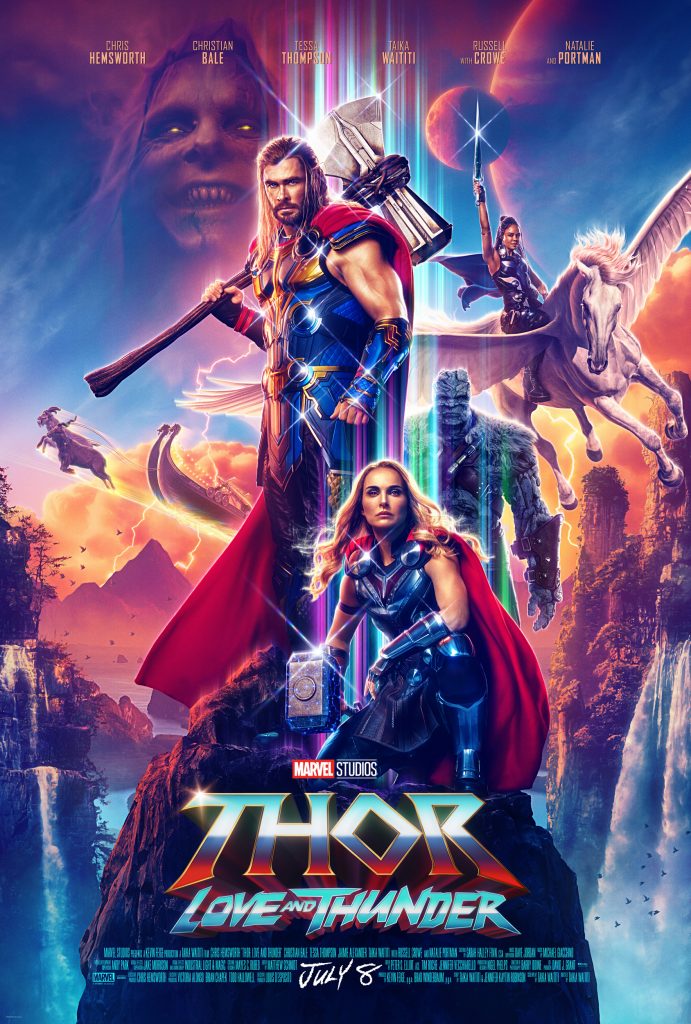 At first glance, director Taika Waititi’s Thor: Love and Thunder appears to be a raucous comic romp, but it’s actually much more than that.

The film does start with an intense desert scene, but it quickly shifts to Thor’s retirement. Chris Hemsworth’s Thor is, in the beginning, a rock-star superhero dispensing justice accompanied by Axl Rose’s Welcome to the Jungle, totally ripped body and long blonde hair flying in the wind. He’s also experiencing an identity crisis, wondering what his place in the universe really is.

His musings are abruptly interrupted by a new threat, Gorr the God Killer, brilliantly played by Christian Bale. Gorr is motivated by sorrow, anger, and a maniacal desire for revenge. He wields the dangerous Necrosword with the ability to kill gods and resides in the Shadow Realm when he’s not actively searching for gods to kill.

When Thor learns that New Asgard is Gorr’s next target, he goes to defend it and recruits King Valkyrie (Tessa Thompson), Korg (Taika Waititi), and, surprisingly The Mighty Thor who is Jane Foster (Natalie Portman)  transformed by the reconstructed Mjolnir to possess the powers of Thor. Jane has a reason for seeking out Mjolnir, a very serious one, but I’ll leave that for you to discover.

Together, they travel to the Omnipotent City to ask Zeus for help. Russell Crowe hilariously brings us an effete Zeus with a cheesy Italian accent, surrounded by an entourage of beautiful women and pretty boys. He turns Thor down, so the trio set out to conquer Gorr on their own. Many adventures and conflicts ensue.

In addition to Thor’s identity crisis, the film also seems to have one. That’s my one complaint about the script. There is so much information, and so many plot threads, that it takes a narrator to straighten it all out. It’s done in the form of a storyteller, a very old Korg, addressing a group of children seated around him in a cave about the deeds of Thor. Much of the film’s humor is tongue-in-cheek which adults will appreciate, but youngsters may miss. That said, the narrative turns very dark at times. It’s sometimes difficult to keep up with the shifting tone.

The film is rated PG-13 for language and, of course, Thor’s well-publicized nude scene. If you’re taking a younger child, there are some intense scenes involving some pretty scary monsters. But, to lighten the mood, there’s also a weaponized stuffed bunny – and goats!

At times, Thor: Love and Thunder gets a bit campy. For example, New Asgard is now a tourist destination with cruise ships lined up by its coastline. But it’s the children of New Asgard who play possibly the most important role in the story. Again, I’ll leave that for you to discover. You won’t be disappointed.

An action film is only as good as its villain, and Christian Bale gives us a spectacular one. He takes a basically one-dimensional character and gives him many layers. As dangerous as Gorr is, Bale gives him a poignancy that invokes the audience’s empathy. He’s a tragic character who suffers as much as those he attacks.  But any softness he displays is quickly countered with cruelty.

As far as what Gorr wants, I’ll only say that Thor’s war ax, Stormbreaker, plays an important part.  Plus, in the end, you will find out who “Love and Thunder” are.

All of the actors perform well, but Bale is a stand-out. Also, a bit that drew applause from the preview audience features Matt Damon, Luke Hemsworth, Sam Neill, and Melissa McCarthy, in cameo roles, as a troop of terrible actors in an equally bad play about Thor, Loki, Hela, and Odin. That’s worth the price of your ticket!

Be sure to stay through the credits as one mid-credit scene and another at the end contain important information about coming films. As if you couldn’t guess, the final sentence onscreen reads, “Thor will be back.” – Jo Anne Hyde