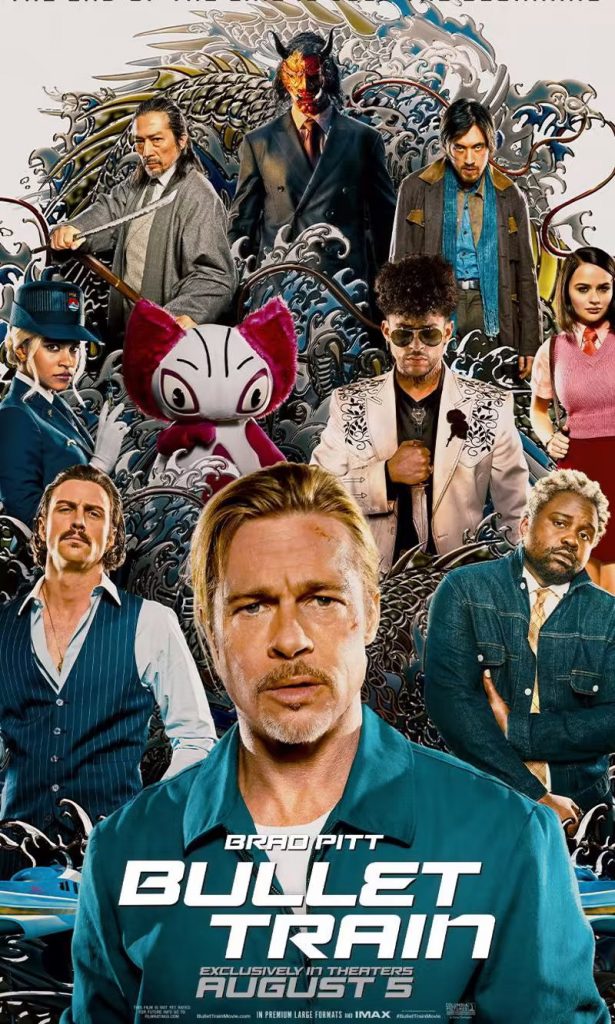 Bullet Train, directed by David Leitch and starring Brad Pitt, comes barreling across the screen like a bulldozer. It’s meant to entertain, and it does. However, I used the bulldozer comparison for a reason. Bullet trains are sleek and efficient. The film often seems more like a diesel hauling too many cars. That doesn’t mean it lacks action or interesting characters, but there are a few too many breaks in the line of suspense.

The plot is of little consequence since the emphasis is on the unifying theme – fate. Characters clash and fight over the target briefcase, but in the end, it’s all about fate. Brad Pitt plays an assassin who believes he has been plagued and hampered by bad luck. He has retired to focus on self-knowledge and inner peace. I know – very odd for an assassin. His handler Maria (Sandra Bullock) calls him back for a “simple” assignment: board the train from Tokyo to Kyoto and retrieve a certain briefcase, then get off the train. It is, of course, completely predictable that it won’t be simple.

One of the problems I had with the film is the beginning. It starts off with a very somber, really disturbing, scene of a father (Andrew Koji), haggard and distraught, sitting by the bedside of his comatose son. Kimura, the father, wasn’t around when his little boy was enticed up to the roof of a department store and pushed. Soon, Kimura’s own father (Hiroyuki Sanada) arrives and asks him what he plans to do. Kimura says he will find and kill the perpetrator. His aged dad says that no matter what, fate will take care of everything. Kimura ends up on the train because he believes he’ll find the culprit on it.

This opening suggests that the narrative will be serious, a revenge story. Well, revenge may be a factor, but the film is anything but serious.  There are four other assassins on the train apart from Pitt’s character, code name Ladybug. There are two brothers, probably foster brothers, known as the Twins even though they’re obviously not. Aaron Taylor-Johnson is Tangerine, a fast-talking, cagey, hitman in a nice suit. He’s the brains of the operation. His “brother” Lemon, is played by Brian Tyree Henry. He’s a rotund tank of a guy, the brawn if you will, who categorizes people by their resemblance to one of the train characters from Thomas the Tank Engine. It helps if you are also familiar with them.

Another killer poses as an innocent schoolgirl rather than the psychopath she truly is. Known as Prince, she manipulates her way into situations to wreak havoc. Portrayed by Joey King, she may be the most chilling of all the killers.

Zazie Beetz plays the Hornet, who kills by poison. Bad Bunny is the Wolf, a ruthless gang lord who wants to kill Ladybug whom he believes killed his wife on their wedding day. The most notorious and lethal crime boss, White Death (Michael Shannon), is everybody’s nemesis and the owner of the briefcase.

Tangerine and Lemon have been hired to bring White Death his kidnapped son,  played by Logan Lerman) and the briefcase containing the ransom money.

So, everybody wants something. There’s also a deadly snake involved. You might guess this is not a remotely serious narrative. Yes, it’s extremely violent, but the mayhem is mostly played for laughs. That doesn’t mean it’s not gruesome — there’s plenty of spurting blood, flying body parts, and brain matter for your amusement. Profanity flows like white-water rapids. Bullet Train sports an R rating, and that’s a hard R rating. Leave the kiddos at home.

The hiccups inhibiting the smooth flow of the story actually relate to Brad Pitt’s character. As the newly enlightened man suffering internal conflict about his chosen occupation, he muses in a Zen-like manner from time to time. These musings go on a bit too long and distract from the action. Philosophy is not why you go to see this film. However, Pitt deserves kudos for using random objects as weapons.  He has not been dissuaded from dispatching pain and death.

You’ll have to see the movie to find out who makes it off the train and what happens to the briefcase. I found Bullet Train to be a violent little romp without a serious bone in its body, a confection, like a blood-soaked French pastry.  All of the men among the reviewers in the screening group loved the film. I found it more of a mixed bag, but if you’re looking for some escapism and are a Brad Pitt fan, this film is your ticket. By the way, look for two uncredited cameos by some very famous actors, one of whom provides the best scenes in the film! – Jo Anne Hyde

BATMAN AND THE OUTSIDERS #2 Review