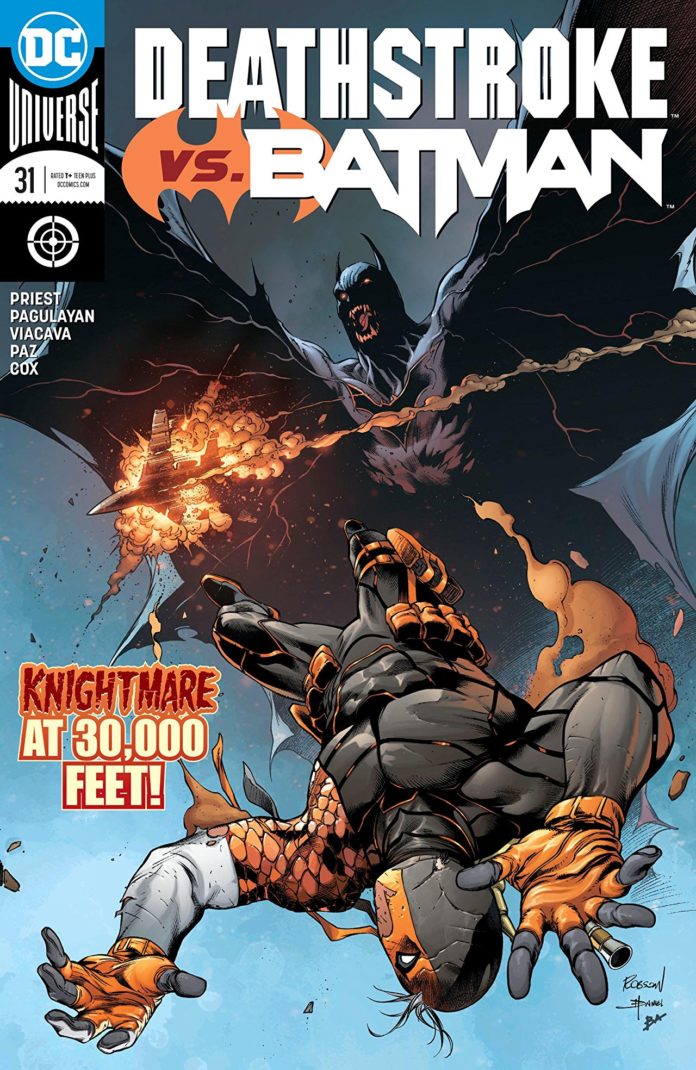 SYNOPSIS: “DEATHSTROKE VS. BATMAN” part two! The war between Deathstroke and Batman escalates when the Dark Knight foils one of Deathstroke’s assassination attempts! Meanwhile, a mysterious package brings Commissioner Gordon to Bruce Wayne’s doorstep, and Adeline Kane—Slade Wilson’s ex—sets her sights on Batman!

Priest left the DCU on edge with “Deathstroke vs. Batman” part one last month and we have been dying to find out what’s next! The similarities between the Terminator and the Dark Knight are intriguing. The father figures with a dry sense of humor, the young protégés, the gadgets and technology, the determination and sense of duty apply to both. Now add two more things to list, Talia and her child.

Priest has made conversations between Deathstroke and Wintergreen just as phenomenal as any Batman and Alfred banter. It is the addition of this “Knight Rider” like suit that really takes the cake. Imagine have two smartass butlers in your ear at all times. It would drive you mad unless you were a scientifically enhanced combat soldier. Continuing a theme from last issue are the flashbacks with Jericho and Robin. These few panels really steal the issue. It’s always a pleasure to hear what the student has to say about the teacher and they do not hold back. The most interesting part of the issue is Priest’s Bruce Wayne. This is a Bruce who doesn’t look that far off from the Bruce Wayne in BvS. He is angry and he is hunting. While we are used to Batman’s interrogation tactics Mr. Wayne’s are not too shabby either. Weather he is wearing the cowl or not it seems that he always gets his man to talk.

Carlo Pagulayan and Roberto Viacara are the artists of the issue. The opening pages loosely adapt the Alfred/Bruce plane scene in JL and the open of Rises with a pinch of Deathstroke. If you are fan of the broken, aged scruffy looking Bruce Wayne from BvS then this is right up your ally. Bruce Wayne’s interrogation scene gives you vibes of a James Bond villain more than it does Batman or his philanthropist alter ego. The action panels in the book all belong to Deathstroke. From falling out of plane while searching for his sword to full combat with Talia in the desert. The Terminator and the artists do not disappoint in any panel or page.

We are two issues into this six-issue arc and Priest has given the reader a solid detective story with a tremendous splash page ending. Priest is masterfully blending Deathstroke and Batman not letting one over shadow the other. Seeing Bruce Wayne, do his due diligence in a comic, is something of a rarity these days and always a pleasure. Deathstroke’s connection to Talia is fascinating and surely is going to set us up for a fantastic confrontation or team up with Batman. Deathstroke #32 goes on sale 6/6/18, until then BOF’ers! – Pete Verra

What I Want In Matt Reeves’ Batman Film by Joey Perotti