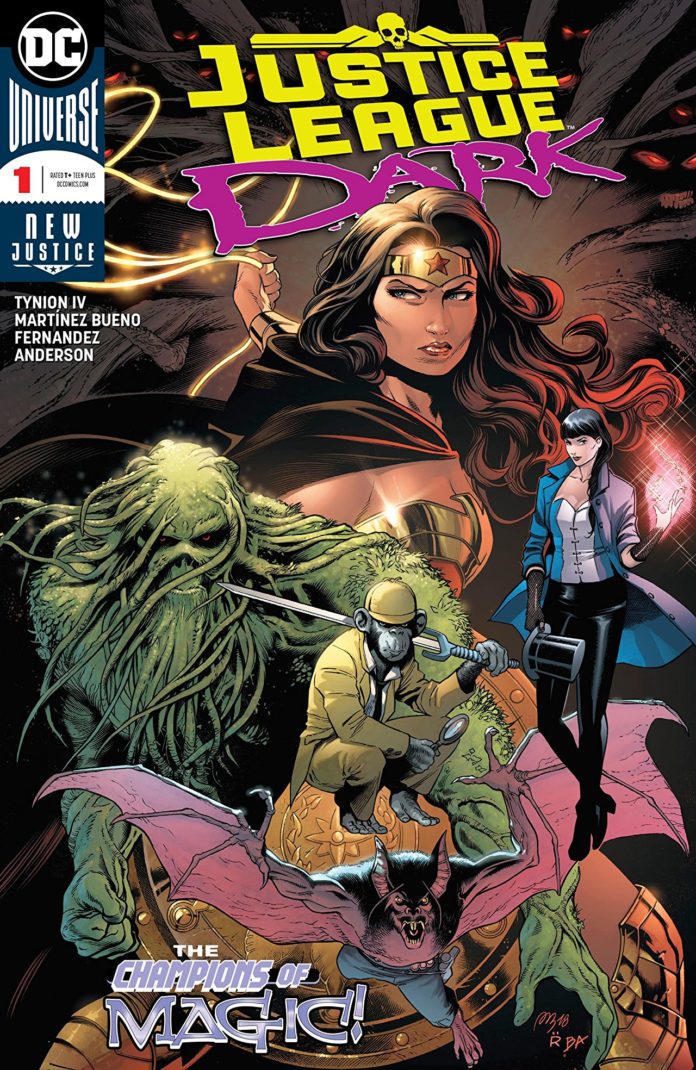 SYNOPSIS: From the pages of JUSTICE LEAGUE: NO JUSTICE! Earth’s magic once belonged to them. Now they want the magic back. But who exactly are they? It’s up to the new Justice League Dark to find out and stop this nightmarish new threat at all costs! After the events of NO JUSTICE, team leader Wonder Woman guides the misfit magic mix of Zatanna, Swamp Thing, Man-Bat and Detective Chimp against enemies too fantastic even for the Justice League. Plus, what awful things are coming through the Tree of Wonder? Dark days ahead…

Something is wrong with magic. How is it going to be fixed? And who will do the fixing?

After Zatanna unintentionally unleashes a horrific entity onto the stage at one of her magic performances, Wonder Woman arrives just in time to help destroy the creature and offer a desperate plea. “Magic is broken,” she says. “And it’s clear you cannot fix it alone. Help me see an end to this, Zatanna. I beg you.” Unconvinced that Diana knows enough about the world of magic to truly help, Zatanna is convinced that a magical problem requires a magical solution, not a physical one. She accepts a summons to Wintersgate Manor where group of magicians meets to decide on how to fix the magical disruption.

Frustrated that no one seems to be willing to help, Wonder Woman heads to the Oblivion Bar and enlists Detective Chimp to help her solve the mystery of the breakdown of magic. Even though Diana feels like an outcast from the world of magic in which Zatanna operates, she reminds Detective Chimp that she grew up on an island that was brought to life by magic. “I rode a griffin for the first time when I was barely old enough to walk,” she explains. Though the magical community remains doubtful, she knows the power and wonder of magic and is confident that she can help find a resolution. Aided by Kirk Langstrom, the Man-Bat, Diana and Bobo begin to look at the horrible physical repercussions of the magical breakdown.

Meanwhile at Wintersgate Manor, Zatanna discovers that Swamp Thing was spying on the magical gathering, and confronts him in Salem, Massachusetts, where he sits before the Tree of Wonder. Swamp Thing is not persuaded that either side is right – the magicians want to keep the issue in the dark and Wonder Woman wants to bring it into the light. In the middle of their conversation, a powerful magical vision overcomes Zatanna. Her father appears to her in a wall of fire, issuing a strong warning: “The original owners of magic are coming, and the old order will not be able to stand in their way… The Otherkind can see you, my dear. You need to run. The Upside Down Man is nearly here!”

The Otherkind can see you.

They are nearly here.

The new Justice League Dark series is off to a great start. James Tynion IV has set the scene and cast his actors well. Seeing Wonder Woman on the cover of the book has the potential to raise eyebrows (it left me intrigued), but her involvement in this story feels anything but misguided. It’s inspired. Diana reminds us that she comes from an island of magic – she belongs in this story more than most. Zatanna brings the right amount of pathos and a strong platform from which to build a narrative of this scale. Detective Chimp, Man-Bat, Swamp Thing, and a brief appearance by John Constantine help round out the pool of characters and keep the story engaging.

While the events of this book stem from Scott Snyder’s Justice League: No Justice, readers who aren’t up to speed on that book have no reason to fear diving into this issue – Tynion gives just enough exposition to get everyone caught up on where the characters are, and where the story is heading. He does some excellent narrative juggling, and while the writing can be a bit dialogue-heavy, the story never feels forced or gimmicky.

Making Tynion’s vision come to life is artist Alvaro Martinez Bueno, whose pencils are on point; strong movement, deep shadow, and gorgeous layouts abound in this issue. Zatanna’s magic act, and Wonder Woman’s subsequent rescue, are kinetic and dynamic – the action fills the pages from end to end with zero space wasted. And while some of the imagery, particularly near the end of the book, leans toward the horrific, it never becomes grotesque.

Colorist Brad Anderson brings the goods as well – cold blues, deep purples, and fiery oranges and reds dance across the panels; and the half page where Swamp Thing sits in front of the Tree of Wonder is a beautiful sight.

James Tynion IV is setting the pieces into place for a good story with “The Last Age of Magic.” From the first few pages, he is establishing a classic “us vs them” dynamic that I’m hoping will continue as the tale unfolds.

Magic is broken, but is the solution a magical one, or a physical one? The answer isn’t clear yet, but with two powerful women on the case, I have confidence that good will win out. – John Funderburg

John Funderburg grew up in Illinois, where he wore out his VHS copy of BATMAN ’89 at a young age. When he isn’t working in the suburbs of Chicago, he generally finds himself downtown, endlessly showing his wife all of the spots where they filmed THE DARK KNIGHT, much to her chagrin.