#BatmanOnFilmMailbag Are you planning on doing more movie commentaries on Batman movies on your YouTube channel like the Burton/Schumacher Batman films, Batman-Mask Of The Phantasm and The Dark Knight Trilogy and Batman v Superman: The Ultimate Edition? pic.twitter.com/6hO61xgXYL

JETT SAYS:  I believe that Justin Kowalski and Ryan Hoss are planning on doing a commentary podcast to celebrate the 10th anniversary of THE DARK KNIGHT.  Rick Shew and I are doing a vlog — which will now be known as “The BOF Show” — on TDK‘s 10th anniversary and my trip to NYC to see it in IMAX this past weekend.  Well see what the future holds — though I don’t see BOF revisiting BATMAN v SUPERMAN or JUSTICE LEAGUE anytime in the near future…if ever.

I’m only asking because you’re a Texan, is the “Jett” nickname in any way connected to James Deans character “Jett Rink” in the Texas epic GIANT from 1956?

JETT SAYS:  HA!  It is not.  However, I did reveal the origin of the nickname on a past BOF podcast and a vlog.  Search ’em out for the answer!

Hi Jett, I have questions about the upcoming SHAZAM! movie. What are the chances of Dwayne Johnson appearing as Black Adam in the SHAZAM! movie?

Suppose Matt Reeves calls you tomorrow and says “Bill, what’s the most important lesson to learn from each of the theatrical portrayals of Batman so far?,” how would you answer him?

JETT SAYS: My answer: “Matt, if you stay loyal to the source material, don’t make Batman the butt of jokes, and do not deconstruct the character, you’ll be fine.”

What do you think about Matt Reeves’ previous work? #BatmanOnFilmMailbag

JETT SAYS: I though both of his PLANET OF THE APES films were excellent.  LET ME IN was fantastic.  CLOVERFIELD was OK.  Looking forward very much to his take on Batman.

Who do you think Oscar Issac is likely to be testing for in THE BATMAN?

JETT SAYS: I really have no comment on this rumor.  Why?  Well, I have to take into account the outlet from where this rumor originated.  Take that for what you will.

With the possibility/probability of a new actor being cast as Batman, my top pick for the role is Wes Bentley. Do you have any thoughts or opinions on this choice? #BatmanOnFilmMailbag pic.twitter.com/bNijgsMzcp

JETT SAYS: I think Wes Bentley would be great as Bruce Wayne/Batman and would have no issue at all if he were Matt Reeves’ choice.  Hell, I believe Chris Nolan recommended him for the part after he was done with Batman on film.  However, if they’re going for a younger Batman — say mide-to-late 20s or so — Bentley may be a tad too old as he turns 40 in September.  I think he’s be perfect for 30ish, in-his-prime Batman.

In an alternate reality, where Chris Nolan came back to do a fourth Batman film with his cast, who would you have chosen as the villains? Who would have played them?

JETT SAYS: Oh man, I have no idea — especially the perfect way it ended with THE DARK KNIGHT RISES.   The only thing I can think of is that RISES had a completely story and didn’t end the thing.  I’d would’ve liked to see Nolan’s take on The Penguin, The Riddler, Black Mask, and Hugo Strange.  Maybe not use all four, but a couple from that group.

I guess if RISES ended the way it did, and Nolan was convinced to do a fourth movie, I’d suggest that a 50-something year old Bruce Wayne (Christian Bale) has to come back to Gotham and become Batman again due to the return of The Joker (Matthew McConaughey) who has killed Nightwing (Gordon-Levitt) and is raging holy hell upon Gotham.

Nah, both my ideas suck.

Thankfully, Nolan told a complete story across three films which had a definitive ending!

Marc Maron has been cast in the JOKER film.  What are the odds he’s playing Jim Gordon? Have you heard anything about who is playing what? Will there be a Batman in this movie? Hard to imagine a Joker film without the Bat, no?

JETT SAYS: I will answer each one per your sentences…

JETT SAYS:  I’ve explained why Affleck’s time as Batman needs to be over via various mediums here on BOF for nearly a year.  Here’s my latest op-ed on the matter in case you missed it.

And with all due respect, no, he is NOT the best Batman on film ever.  Just because he looks the most like the comic book version of Batman, does not make him the “best.”  He’s a distant 4th to Bale, Keaton, and West.

In regards to the others from JUSTICE LEAGUE, only Gal Gadot’s Wonder Woman is unscathed — she and that series of films are Teflon.

I’m a HUGE fan of Henry Cavill as Superman, want another solo Superman film with him in it, but I do think he’s tainted as well.  Not as much as Affleck, but tainted nonetheless.  Thus, I’m not so sure we’ll see him as the Man of Steel again.  I hope so, but I have serious doubts.

As far as Jason Momoa as Aquaman, that’s going to be the first real test for DC on film post-JL.  I truly believe that if AQUAMAN had not already been filming when JL came out last November, there’s a good chance that it would’ve been either postponed or canceled.  It’s great that director James Wan’s doing his own thing with this movie and that it will rarely — if at all — mention the rest of the DC on film universe.  We’ll just have to see if the general audience comes out, or if there’s just too much JL stink tied to it.

As far as The Flash, I really have no idea why they’re going ahead with that movie.  Again, even though it’s going to be a standalone film, will its tie to JL be too much to overcome just like AQUAMAN?

When it comes to continuity, it’s going to be a shared DC on film universe in name only going forward.

How was THE DARK KNIGHT screening? (via email)

JETT SAYS: The meet-and-greet beforehand was fun! (see pic below) 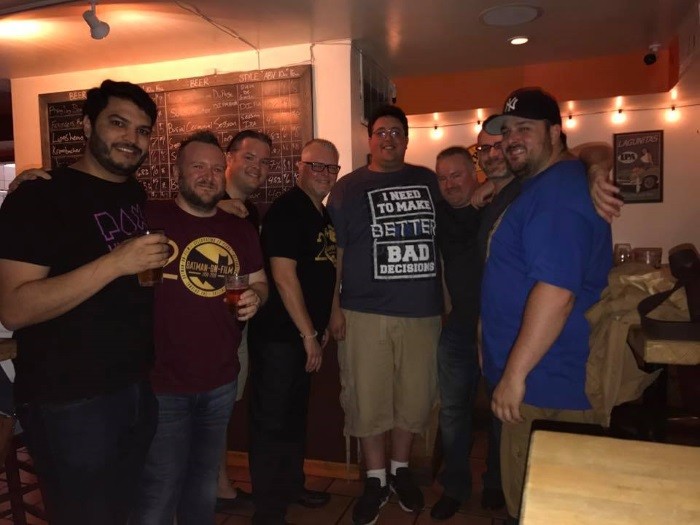 As far as my experience seeing the film, I’m writing something about that as we speak, as well as recording a new vlog on it today.  Stay tuned!

Top pick for director for MAN OF STEEL 2 if we ever get one?

Do you have a feeling we are going back to getting an “unknown” to play the role of Bman/BW? #BatmanOnFilmMailBag https://t.co/uyXm9oCaSV

JETT SAYS: Hey Pete!  Like “Unknown Christopher Reeve” for SUPERMAN?  Or “Unknown Christian Bale” for BATMAN BEGINS?  Yeah, I think both types of “Unknown” are possibilities.  I also think you could go with an established actor like, say, Armie Hammer. 😉

WB has hired you to be the chief creative officer for a new Batman 30 minute weekly cartoon. Tell us about it. Ages geared towards, realism vs fantasy villains, which Bat-Family, style, etc.

JETT SAYS: Tough question.  Personally, I’d go with something to be shown in prime time and on cable — like HBO, etc.  Not R-rated, but definitely PG-13 and geared towards a more mature audience. Since its not geared to kids, no Batman Family other than Alfred and Gordon — i.e. no kid sidekicks.  Dark, noirish detective stories with a mix of realism and a bit of the more fantastical.  The best example I can give is something similar the SPAWN animated series on HBO back in the late 90s.

How can Matt Reeves differentiate his Batman from previous cinematic incarnations?

JETT SAYS: Have a unique vision as well as a passion for the character and the rest will take care of itself.