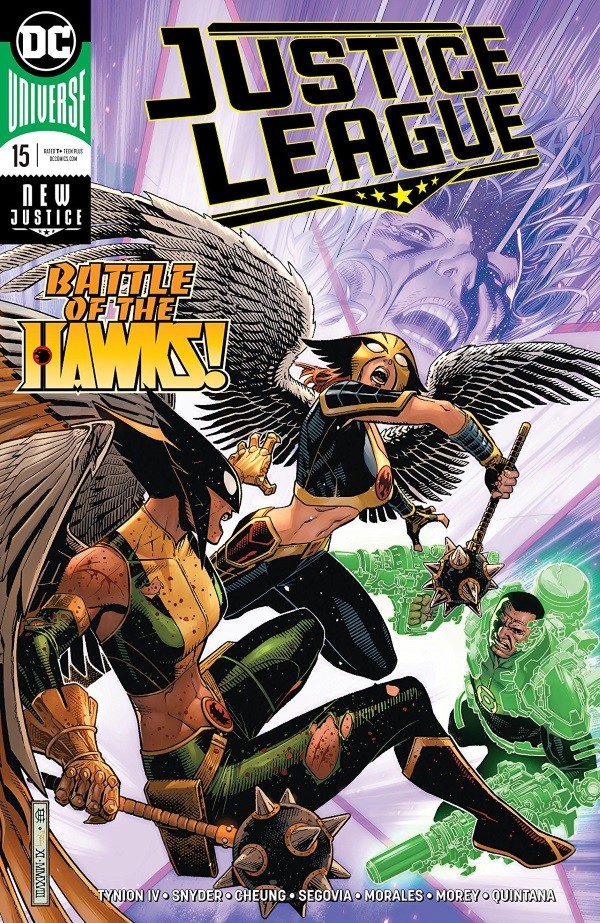 SYNOPSIS: Hawk fight! Martian Manhunter, Green Lantern and Hawkgirl clash with Shayera Hol (also a Hawkgirl) when the League trio tries to break into a secret vault deep within Thanagar Prime—and the feathers are gonna fly! Speaking of secrets, M.M. learns one about himself and Lex Luthor, as related to him by the Martian Keep, guardian of all Martian wisdom and history. Meanwhile, back at the Hall of Justice, Batman, Superman and Wonder Woman must stop Starman from going nova.

Wait. That’s not quite what I’m saying.

Justice League has been rich with continuity for a while now. It’s steeped in the stuff. The title is fleshing out a story that Scott Snyder has been telling for over a year at this point. A story that is seemingly reaching way back in DC history, referencing and even directly tying together familiar elements in a really cerebral way.

What I mean to say is this: It was really refreshing to get a Justice League issue that jumps off directly following the events of the previous entry in the series.

Justice League #15 opens with Superman, Wonder Woman, and Batman working to save Earth (and maybe all of reality) from a Starman that is experiencing a wild fluctuation in his power set. His solar powers are flaring at a level that is even powering up Superman to potentially dangerous levels. But the threats are not limited to the heroes and citizens of Earth.

>Hawkgirl, Green Lantern, and Martian Manhunter are embroiled in battle on Thangar Prime, facing down Empress Shayera, a seemingly resurrected Hawkman, and the Hawk Guard. Beyond the battle, their mission is to uncover what is really taking place on the planet and discover what has happened to the Martian Keep. The answer is what looks to open up the greater storyline even further and has some exciting implications.

Scott Snyder and James Tynion IV handle the story duties again, with Tynion serving as the book’s writer. The pair has done an excellent job working thematically with this story, leaning heavily upon elements of deception, illusion, and internal motivation. The series has been working with mind control, self-awareness, and free will for some time, but this issue does so in one of the more straightforward manners in recent memory. Martian Manhunter really shines in this installment and the story’s plot allows him to showcase his skill sets the best of all the characters involved.

The mystery of Thangar Prime and its empress is handled well here. Tynion displays a real skill at dropping subtle hints that clue the reader in just enough to make them feel like they can sense what is unfolding, without taking away from the satisfaction when things become a bit clearer. In that regard, this issue feels like a step forward to some greater clarity in the larger narrative at play.

Jim Cheung and Stephen Segovia again handle the pencils and the book is beautiful to look at. I’d love to see a breakdown of exactly which artist had which responsibilities on the book. I’m fairly certain the workload is split between the characters on Earth and those on Thangar Prime, but they work so well together I couldn’t be certain. The world building on Thangar Prime is particularly effective, introducing elements of the planet that haven’t been seen before in a way that is bright and bold. This is most evident in the pages focused on the great vault system below the planet and its entrance, but I was also impressed with the artwork depicts the illusions and perceptions of characters in a clean and easy to follow manner.

Justice League #15 feels like a high point among more recent entries in the series and also improves Justice League #14 with the direct continuation of its story. Don’t miss it. – Garret Grev