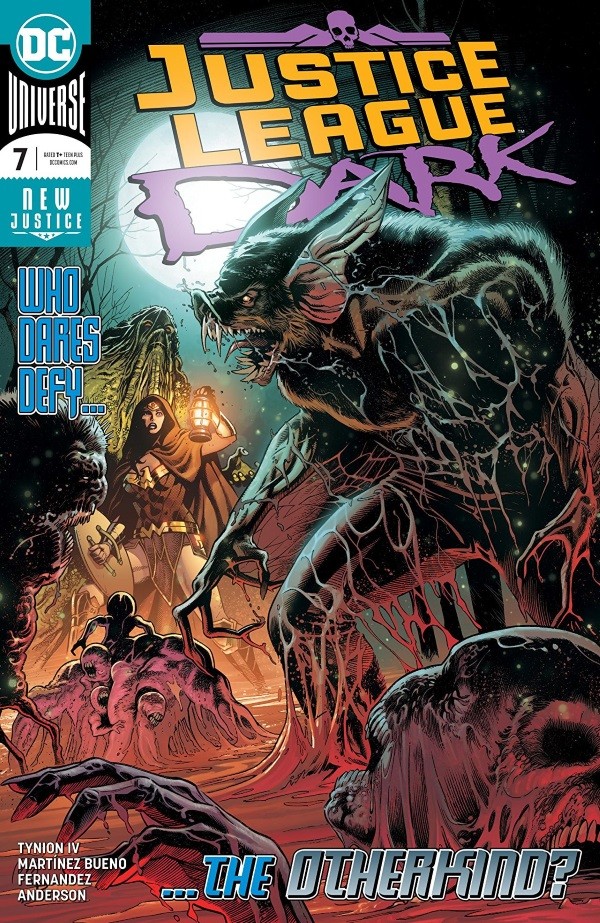 SYNOPSIS: First rule of magic: things can always get worse! Man-Bat learns that the hard way when he plays narrator and chronicles the nightmarish menagerie known as the Otherkind—horrific, monstrous entities such as “the Soup,” “the Rip” and “the Offspring”—that burst through the Sphere of Gods and invaded Earth. The JLD soon realize they’re no match for an invading horde of hellspawn, and to have any kind of chance, they’ll have to go down a darker path. But how much darker can this team get before they become monsters themselves?

Well hey, it’s January and Justice League Dark is back for a new year of thrills and chills!  The Otherkind have returned, they walk amongst us, and they are… quite a bit more interesting than I would have thought.

In Issue #7 of JLD, we get a refreshing offering from writer James Tynion IV.  In the lower levels of the Hall of Justice, Man-Bat is clicking away at his typewriter, compiling all of the documentation about The Otherkind.  As we, the reader, hover over his shoulder, Man-Bat turns in surprise and cries out, letting us know that we’ve startled him.  He gives us a brief explanation of his late night recordings, then he pours himself a drink, grabs a file from his desk, and begins to tell us a series of creepy tales – evidence of The Otherkind!

I have to say – I dig what writer James Tynion IV did with this book. This is a pleasant departure from the journeys that he has been taking us on over the last few issues.  It appears as if he is setting the table for future installments, which is really what he should have been doing all along instead of blasting us with inane, exposition-heavy drivel month after month.  He’s introduced several new “Otherkind” entities: The Soup, The Conjoined, The Offspring, and the RIP.  Each of these enigmatic villains gets a chance to share the spotlight this month, and though we only get a flavor of them, I’m looking forward to seeing them return in future issues.  I just hope that Tynion gives them each a chance to breathe.

One other pleasant surprise is the manner in which the stories are told.  Man-Bat is speaking right to the reader as he spins his yarns, breaking the fourth wall (you actually see the panel around him shatter as he turns to face the reader), and this adds a more engaging and playful ambiance to the proceedings.  He even issues a stern warning to the reader at the end to not share what he’s told them with anyone else, lest the reader be responsible for ushering in the imminent dominion of the Otherkind.

Though the sum of its parts is good, I do have a couple of minor gripes with this book.  The individual stories, as interesting as they are, don’t exactly go anywhere.  They just feel… incomplete, a flash in the pan.  I would have preferred if each of these short stories had been issue-length; my fear is that Tynion is trying to rush things again, instead of letting the story and characters build gradually.  My other criticism is that some of the stories feel heavily disjointed, and not in a pleasing sort of way.  Perhaps Man-Bat’s fear that he is losing his grip on reality is bleeding into the tales he is telling, which would be wonderful conceptually, but if this is the case, it isn’t made apparent enough so that the reader could definitively deduce this.

But hey, let’s end on a positive note!  Artist Alvaro Martínez Bueno and colorist Brad Anderson are back (hallelujah!), and they’ve brought their A-game.  Strong pencils, deep shadows, and spot-on colors abound.  I’ve been a big fan of these guys since Issue #1, so I was thrilled to see them return to the world of JLD.  I hope they stick around for a few issues because this book always looks its best when these two are in the mix.

Overall, this is a much better and more engaging comic than a lot of the other issues in this series have been.  If you’ve had the chance to catch any of my other reviews, you know that this book has been a major disappointment most of the time.  But this month, we can celebrate because Tynion appears to be breaking new ground – let’s just hope he builds something worthwhile in 2019. – John Funderburg