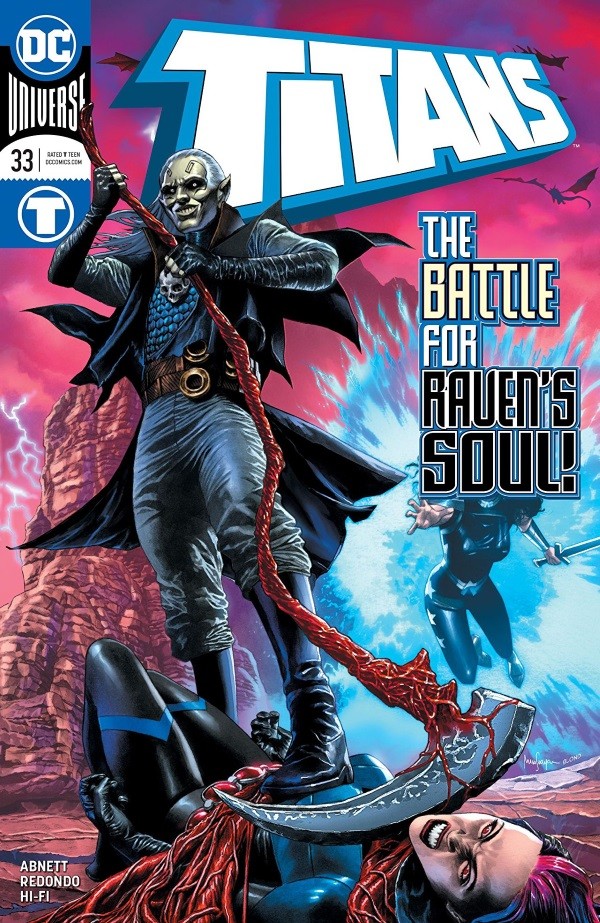 SYNOPSIS: “Into the Bleed” part one! Raven’s soul-self has been trapped in “Unearth” for months, and the team finally figures out a way to return and save their teammate. Not only that, but the formerly fictional fantasy realm holds a crucial key to finally unlocking the mystery of the Source Wall energy—so they may be saving the entire Earth in the process! Only one problem: the Blood Cult may have beaten them to it.

The Titans have journeyed to Unearth to stop the Blood Cult and rescue Raven’s soul self.

That is the simplest, and most accurate, description I have used for any issue to date. My brevity and previous review may have you think there is nothing good to say about this issue, but…I enjoyed it.

As the Titans begin to move through Unearth, they are guided by Ben as he goes through all the Unearth fiction. As they point out in the issue, he is running their mission like a Dungeon Master and enjoying it all. This framing device plays better than the standard “guy in the chair” troupe. Making it a little meta with the D&D feel gives the hat tip to role-playing fans, but most importantly, it works for a fun team dynamic.

This issue marks the return of Seneschal, the elfish prince of Unearth. Last we saw him, he was on regular Earth, having swapped place (we assumed) with Raven’s soul self. Now, he is back on his throne on Unearth, and “the Creator” Earnest Hinton has come along with him (hopefully we get some explanation on how he was able to world hop). I thought Seneschal would cause more problems for the Titans on Earth. He has been there with them knowing he was there. That seems ripe for some surprise conflict, but it seems they will confront him here first. With his world jumping ability (another assumption) there is probably time for that to happen.

The Blood Cult is also on Unearth and, surprise surprise, they want to team with Seneschal. That plays more into the last issue, and the set up to what the Cult wants. Just like the last issue, I don’t care for this part at all. It doubles down on the convenient themes of the previous issue. The two baddies team up in such boring fashion. Both Seneschal and the Blood Queen have so much potential, it has yet to be captured on the page.

The issue ends on a high note as the levity comes in. There is a scene with Kyle and a bunch of trees that was hilarious. Also, Seneschal has a new lieutenant, one that Hinton didn’t create, and we don’t see her face until the end. You can probably guess who it is, but there is a bit of a swerve in the middle of the issue. I am excited to see how that plays out. Just wish that there were more of those moments.

Though it still struggles a lot, it was so much better than#32. – E. Chad Metz