SYNOPSIS: We all have a superhero inside us, it just takes a bit of magic to bring it out. In Billy Batson’s (Asher Angel) case, by shouting out one word–SHAZAM!–this streetwise 14-year-old foster kid can turn into the adult Super Hero Shazam (Zachary Levi), courtesy of an ancient wizard. Still a kid at heart–inside a ripped, godlike body–Shazam revels in this adult version of himself by doing what any teen would do with superpowers: have fun with them! Can he fly? Does he have X-ray vision? Can he shoot lightning out of his hands? Can he skip his social studies test? Shazam sets out to test the limits of his abilities with the joyful recklessness of a child. But he’ll need to master these powers quickly in order to fight the deadly forces of evil controlled by Dr. Thaddeus Sivana (Strong).

Did I ever tell y’all that I’ve been waiting for this film since 1974?  ANYWAY… 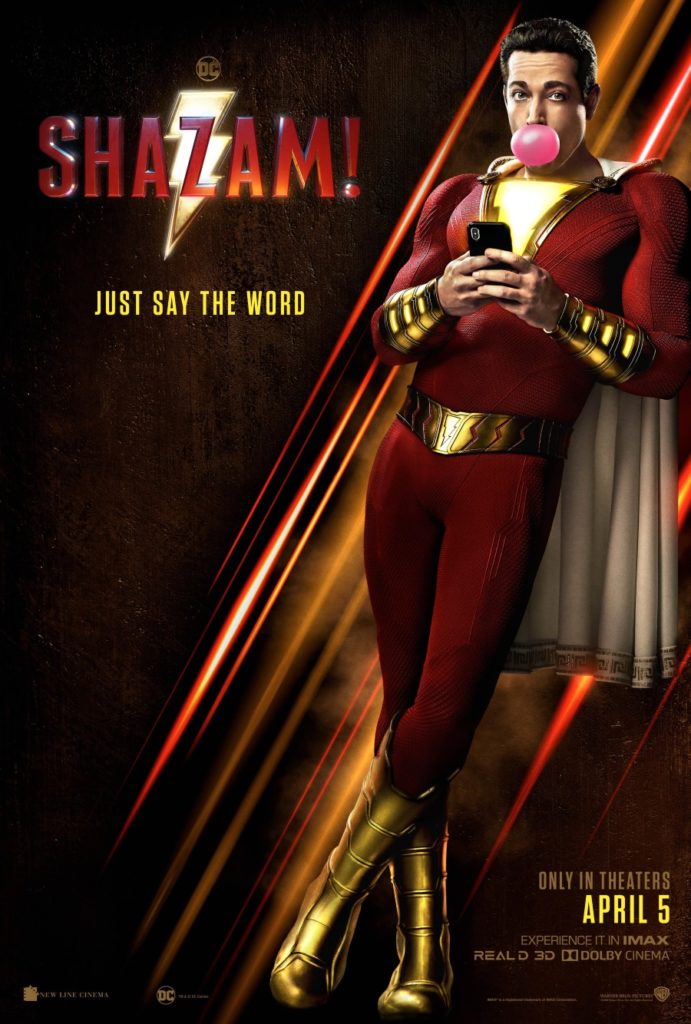 After years of trying and development hell, the original Captain Marvel finally makes it to the big screen in the latest DC movie from Warner Bros., SHAZAM!

Starring Zachery Levi as the Big Red Cheese and Asher Angel as his teenage alter-ego, Billy Batson, SHAZAM! is a fun flick with a lot of heart and one that wears its comic bookiness on its sleeve — all of which was required to do this movie right.

So, is SHAZAM! an all-around success?  For the most part, yes it is.  However, there are some issues which prevent it from entering the realm of comic book movie greatness.  I’ll get to all of that in a bit.

The film opens in the 1970s and depicts the origin of Dr. Sivana (Mark Strong).  For me, Sivana was always depicted as an evil genius/mad scientist sort of dude who was Captain Marvel’s main villain.  Here, the attempt is to make him more “human” (let’s just say that he’s got some major father issues) and also link Sivana to Billy Batson as well as the wizard Shazam (Djimon Hounsou).

From there we fast-forward several years and learn how Billy Batson became an “orphan.”  I put orphan in quotation marks on purpose, but I’ll let you find out for yourself why.

Billy, we learn, has been in numerous foster homes over the years and has worn out his welcome — or used up all his second chances — with the child welfare department of Philadelphia, PA.  He is given one last chance to get his act together as he’s placed into a loving home that includes several other foster kids which includes Freddy Freeman (Jack Dylan Grazer) — a superhero fanboy who will prove to be a valuable asset to Billy once he receives the powers of Shazam.

Speaking of those powers, Billy’s transformation into “Captain Sparklefingers” is essentially the same as its been since the creation of Captain Marvel by Bill Parker and C.C. Beck for Fawcett Comics in 1939.  Being deemed as someone “true of heart,” Billy is transported to the Rock of Eternity where the wizard gives Billy his powers and thus, turns him into a superhero by simply saying one simple word: Shazam!

And off we go!

The best part of the film — at least for me — was Billy learning what powers he has and how to use them.  This is where Freddy’s superhero expertise comes in handy as he pretty much becomes Billy’s mentor (if you watched the old SHAZAM! TV series from the 1970s, you’ll see what I did there). 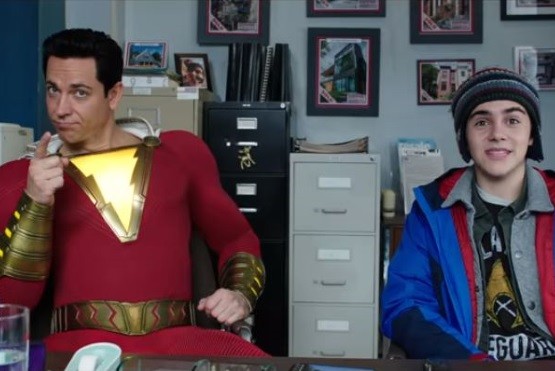 Yes, superheroics play a big role in SHAZAM!, but the main theme of the movie is “family.”

I won’t reveal whether or not Billy learns the value of family and teamwork, but I will say that if he does, there might be a great example of it during the finale that’s a big nod to the Captain Marvel mythos.

One more heap of praise for SHAZAM!: The cast is absolutely great.  It’s hard to pick standouts, but if I must, I’d say that Jack Dylan Grazer, Zachary Levi, and Faithe Herman as Freedy, Captain Sparkle Fingers, Darla, respectively, a standout.  Heck, Grazer and Hermann dang near steal the movie!

Now, the film is not perfect.  In fact, I’d say that the first wave of social media reactions were a bit hyperbolic in their praise of SHAZAM! I hope that this doesn’t inflate people’s expectations for the movie and they come out disappointed.  Is it good?  Yes, it’s very good.  But it isn’t the greatest DC movie ever as some of those folks proclaimed a couple of weeks ago.  Consider this a heads up.

So what didn’t work?  Well… 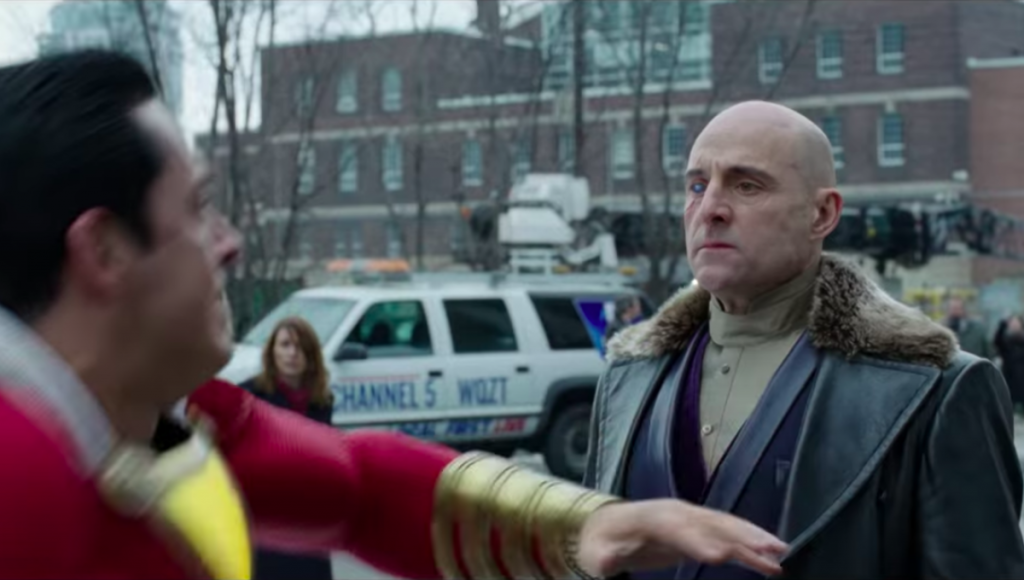 Mark Strong’s Dr. Sivana is “just OK” as a villain.  I don’t blame him because his performance was fine, the way the character is written portrays him as a regular ‘ol generic bad guy.  Dr. Savana’s backstory makes an attempt to humanize him — heck, even make you sympathize with him — but it simply didn’t work for me in that regard.

Sivana’s henchmen — the “Seven Deadly Sins” — are brought to “life” in the form of bad  — and I mean BAD — CGI monsters.  Furthermore, their dubbed voices sound worse than those on H.R. PUFNSTUF on Saturday mornings back in the 1970s.

The DC Universe stuff.  For 99.9% of the movie, it pretty much ambiguous whether or not Superman, Batman, Aquaman, etc. are real or fictional.  In fact, one could interpret however they want.  Mostly, SHAZAM!‘s ties to the greater DCU come in the form of toys, action figures, clothing/attire, and accessories (example: school backpacks).

However, there is one very brief moment at the very end of the film that lets the audience know that the DC characters mentioned are “real.”  Billy — in his adult superhero form — didn’t need to bring someone with him to make things right by Freddy.  Not only is it not needed, but it also takes away the shine from the film’s main character.

All in all, I liked SHAZAM! a lot.  There were many times that it made me laugh out loud and I was touched by the family aspect of the film. I didn’t find it to be great though, but that’s OK — it definitely didn’t disappoint me.  In fact,  I’m now invested in the world that it set up and I’m looking forward to a sequel(s).  Speaking of which…

Make sure you stay through the first round of credits and watch the tag.  I’m usually not keen on post-credits scenes, but as a fan of all the Golden Age Captain Marvel stuff, there’s a cameo that put a big smile on my face. – Bill “Jett’ Ramey