Yes, there are several books about the history of Batman.

I should know; I probably have all of them, much to the chagrin of “Announcer Rachel” ($$$).

Now, we’ve got another one coming out in honor of Batman’s 80th anniversary: BATMAN: THE DEFINITIVE HISTORY OF THE DARK KNIGHT IN COMICS, FILM, AND BEYOND.

Published by the fine folks at Insight Editions and written by Andrew Farago and Gina McIntyre, I’m not going to argue against the claim in the title that this book is the “definitive” history of our beloved Batman.

In fact, its awesome front cover is essentially a visual metaphor of what’s inside.

I got a reviewing copy of the book a couple of weeks ago (Full Disclosure!) and it’s taken me that long to get through the whole thing well enough that I could write my review.

Every single incarnation of Batman in every single medium is covered and backed up with tremendously thorough research and citations.  Heck, just about everything anyone who is significant in the world of Batman said is quoted in this book and properly sourced.

I’m not going to rehash everything that’s in the book (other than to say it includes everything Batman), because all y’all care about is whether or not I recommend it to BOF readers.

Out of all the info within the covers of this book, my favorite part of it are the various inserts found in the spine throughout.  I won’t speak to them specifically, but it suffices to say they include every single period of Batman’s history.  Check out my “first look” video as I thumb through the book right after I received it…

My only very, Very, VERY minor quibble with this book is that it doesn’t address any of the, well, “behind the scenes negative stuff” that has taken place over Batman’s 80 years.

Maybe someone 😉 will deal with that and write a book at a later date.

BATMAN: THE DEFINITIVE HISTORY OF THE DARK KNIGHT IN COMICS, FILM, AND BEYOND is an extraordinary love letter to Batman and the history of the greatest fictional superhero ever created. It includes everything Batman from 1939 to right up to today — well, sans JOKER and the upcoming Batman on film reboot, THE BATMAN.

That’s the way it goes with history, right? 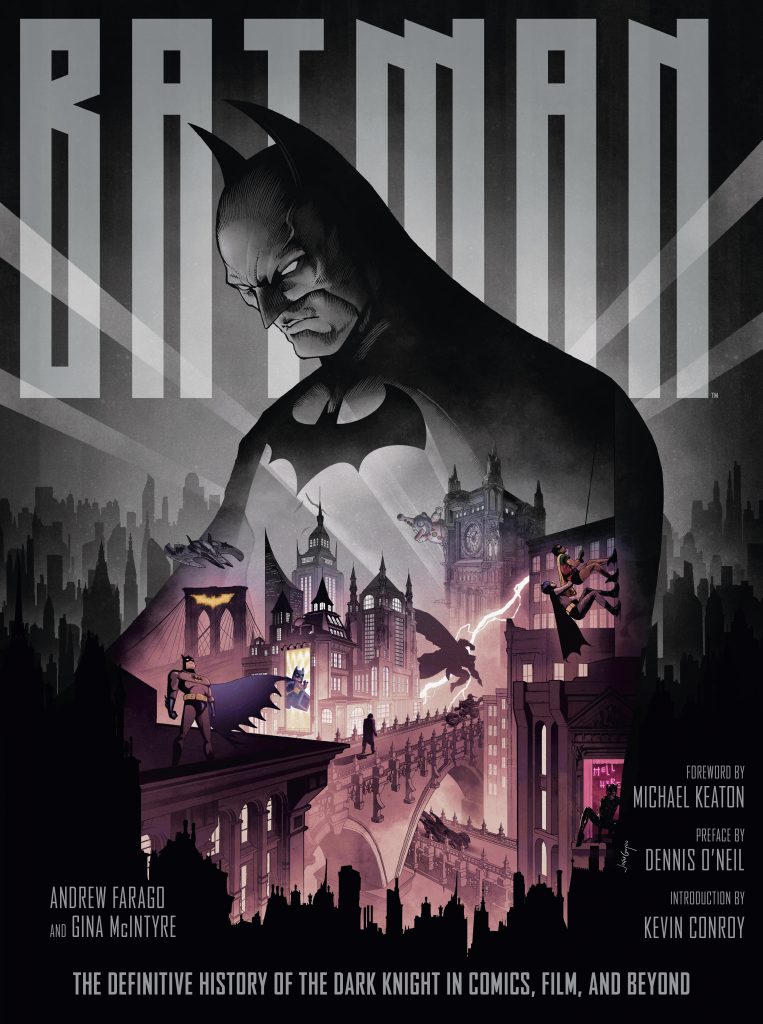 SYNOPSIS: Since his 1939 debut in the pages of Detective Comics, Batman has become an icon, instantly recognizable the world over. Yet, despite being known to millions, Gotham City’s guardian has been interpreted in so many radically different ways that we all now have our own Batman. To some he’s the colorful Caped Crusader who dispatches villains with a POW! To others he’s the grim Dark Knight hell-bent on avenging the death of his parents. And to others still he’s made of LEGO, has great abs, and likes to eat lobster thermidor!

For the first time, this deluxe volume tells the complete story of Batman and the many forms he’s taken throughout the years across comics, TV, animation, film, video games, and beyond, to present a compelling portrait of one of the most recognizable and versatile characters in the history of fiction. Covering the complete history of Batman in vivid detail, the book features exclusive commentary from the key creatives who have been instrumental in building the Dark Knight’s ongoing legacy, including Neal Adams, Tim Burton, Paul Dini, Steve Englehart, Mark Hamill, Grant Morrison, Julie Newmar, Christopher Nolan, Denny O’Neil, Joel Schumacher, Scott Snyder, and Zack Snyder.

Along with taking readers on an unparalleled journey into the creation of the most memorable Batman moments in the character’s eighty-year history—from the “Knightfall” comics arc to Tim Burton’s films and the Arkham video game series—the book busts open the DC Comics and Warner Bros. archives to deliver an avalanche of never-before-seen visual treasures that are guaranteed to blow the minds of Batman fans everywhere.

Filled with exclusive insert items that further deepen the reading experience, Batman: The Definitive History of the Dark Knight in Comics, Film, and Beyond, is the ultimate exploration of a true legend whose impact on our culture has no limits.

THE FLASH Director Announces Beginning of Filming on IG