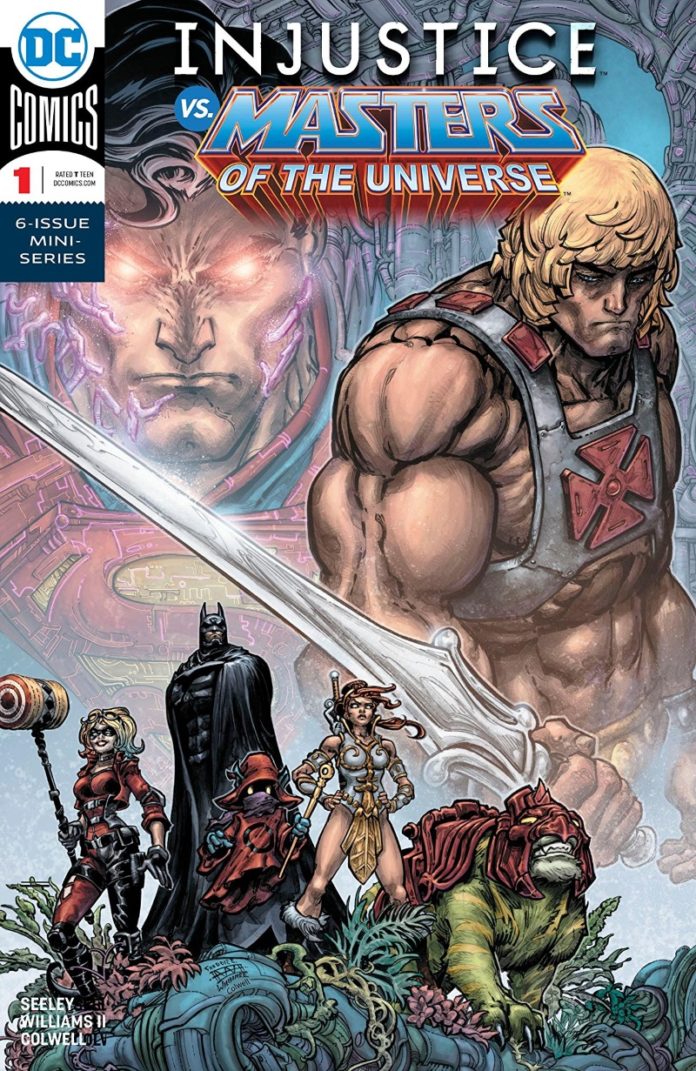 SYNOPSIS: Believing He-man and the Masters of the Universe defeated, a robotic impostor has seized control of Eternia-but not for long! After freeing his kingdom from this strongman’s rule, Prince Adam learns not everyone is pleased to see the pretender deposed-but Adam knows the value of freedom. So when heroes from another dimension ask his aid in deposing a super-hero turned dictator, he agrees. Teaming up with Batman against the Superman of the Injustice Universe, He-man and his new allies face dangerous and familiar enemies in a battle where no world is safe!

There is a lot going on in DC’s first issue of Injustice vs. Masters of the Universe.

The six issue mini-series seems like the perfect opportunity to reach out to the casual reader or nostalgic public, with familiar faces and a story that is accessible to a wide array of readers. Writer Tim Seely has gone in a much different direction, crafting a tale that calls for a somewhat deep previous knowledge of not just two separate fictional universes, but two distinct and particular variations on two different fictional universes.

For the uninitiated, DC Injustice is a storyline that takes place in an alternate reality to the main DC Universe. In this reality, Superman has become a murderous and authoritarian dictator, claiming the sole leadership role over the entire Earth. What could have possibly happened to drive the Man of Steel and defender of “Truth, Justice, and the American Way” to cast aside his convictions and turn so evil? Oh, just The Joker tricking him into murdering Lois Lane and their unborn child while causing the eradication of Metropolis via a nuclear explosion. Fueled by rage and grief, Superman murders The Joker in cold blood, right in front of Batman. Suffice to say things get worse from there. Superman and Batman both end up leading teams in an all out war for the future of the planet.

Flash forward to the present of the Injustice Universe– well, the version of the present if you follow one of the potential endings to the Injustice 2 video game where Superman is back in control after defeating Brainiac and adding his powers to his own- and Batman’s resistance is looking to recruit magic-users to take advantage of Superman’s only weakness besides Kryptonite. Hey, isn’t there a ton of magic and people who use it in the other property in this comic?

Meanwhile, He-Man and the Masters of the Universe are fresh from their previous cross-franchise adventures with The Thundercats. The series serves as an immediate sequel to 2016’s He-Man/Thundercats series and the action picks up on, after cosmic enforcer Zodac provides The Masters of the Universe’s backstory via an “Enforcer Log” entry, a battle in the royal throne room of Eternia. He-Man and his allies battle the robotic doppelgänger Faker, who has stolen He-Man’s identity and ruled in his place for the past three months. The true He-man, and familiar friends, have been stuck in the “Dwell of Delusions” while Faker has stripped away civil liberties in the name of security for Eternia.

After dispatching Faker rather quickly, He-Man is disheartened to learn that (some of) the citizens of Eternia preferred living under Faker’s authoritarian rule. He-Man’s secret identity had been exposed in the previous Thundercats adventures, and he has lost the approval of some Eternians who look down on his being the apparently weak and cowardly Prince Adam. He-Man makes an impassioned speech declaring that He-Man either uses his immense power to protect freedom or he does not use it at all.

See, I told you there was a lot going on.

It’s at this point that our story really takes off, and it moves pretty quickly. The new Batman, we don’t know who he is and the real Batman is a mind-controlled prisoner of Superman, leads a group of heroes to Eternia on a recruiting mission after hearing He-Man’s declaration on his use of power to protect freedom. This Batman downloads Prince Adam with all the necessary back story of the Injustice Universe and wants He-Man to join forces with them against Superman, who is being aided by Skeletor, of course.

The issue closes with He-Man agreeing to return to Earth, along with some of his closest friends, and Zodac racing back to Eternia just before a new and immense threat arrives to make their presence known.

The execution of this issue is a bit mixed, but overall strong enough to recommend to anyone who loves these characters. The worlds of DC and MOTU have interacted several times before (DC actually published the early mini-comics that were packaged with the original vintage toy line) but there is a strong swell of nostalgia and awe created here. There are a few really solid character moments at work, particularly in the pairing of characters from each world. Moss Man and Swamp Thing stand out the most, and Seely shines in using these two characters as the glue that bring the two properties together even in their brief interaction. The only drawback is that there is so much going on in this issue that most of the other characters get overlooked from a development standpoint in order to keep the story moving. Outside of He-Man/Prince Adam, almost everyone else is here in the periphery. Even Batman, both the mind controlled and the new version leading the DC heroes, doesn’t have a lot to do other than queue up exposition.

Seely also succeeds in giving the reader a compelling reason for the properties to interact. He-Man is set up as the anti-Injustice Superman: a hero with immense power that is determined to use it to protect others, but not at the expense of liberty. This and his magical origins are the perfect combination to make him a champion on the side of Batman’s resistance forces. What could have seemed like a quick and easy cash grab by combining two franchises is actually a solid narrative built on the back of what has been established in each continuity.

Cuing up this storyline was clearly going to be a challenge given the necessity of establishing each world’s history for readers that haven’t been following the relevant events for each universe. The issue is held back by mountains of exposition that drag a bit, particularly in the first 1/3 of the issue. Even with a full page dedicated to each, and a few call back and editor’s notes, many readers will find themselves scratching their heads at some plot points and dialogue (like me, having not been aware of their being two Batmans in the Injustice Universe and their being presented without any explanation.) This is more than likely a necessary evil for the first issue and hopefully things are a bit less clunky moving forward.

Freddie Williams II handles the art on the book and it’s excellent. William’s was the artist on board for the previous He-Man/Thundercats as well as the Batman/Ninja Turtles crossover, and his style is a perfect fit. Williams approach is a bit cartoonish, favoring rounded, sketchy designs over clean lines. He accentuates hulking and exaggerated physiques which lends quite well to these properties. Along with colorist Jeremy Colwell, they are able to achieve a hyperreal quality to the artwork and a beautiful, otherworldly Eternia along with a dire and dystopian Earth.

Overall, there is plenty to recommend in this first issue and I’m very excited to see where this creative team brings these characters over the course of this mini-series. It’s well worth a purchase. – Garret Grev 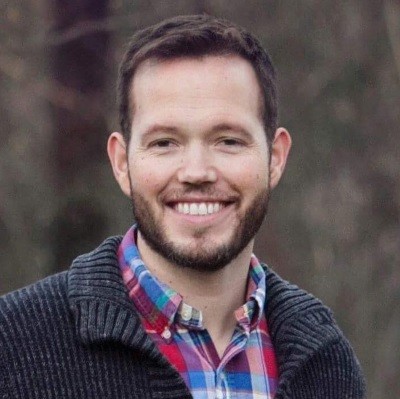 Garret Grev is a longtime reader of BOF and a life long Bat-fan. Garret lives in Minnesota with his lovely wife and three sons (who may or may not all be named after his favorite Bat-actors.)   Outside of Batman and comics, Garret loves the outdoors, playing music, collecting 80’s action figures, and the Minnesota Vikings.  Garret is the co-founder and co-host of the fantasy football site, What Are the Odds? and its associated podcast.