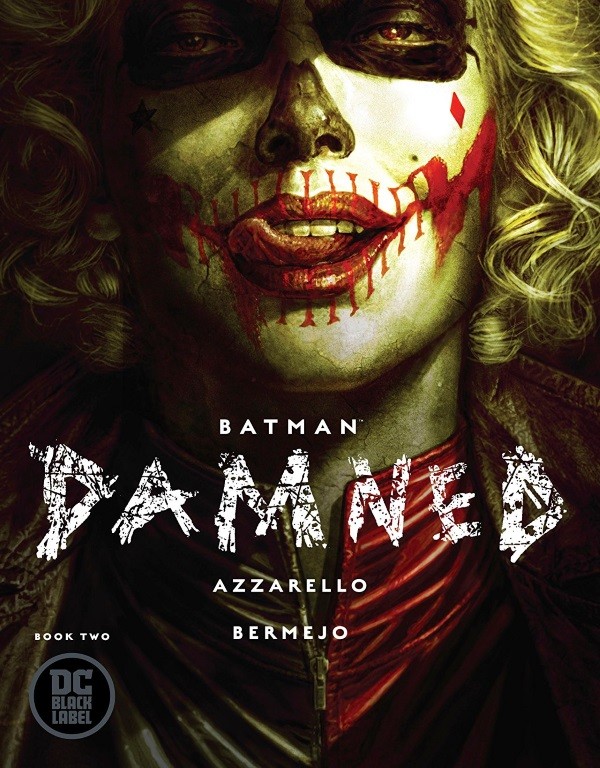 SYNOPSIS: As Batman’s descent into the madness of Gotham City’s decadent underbelly continues, he must try to exorcise some of his demons…and who better to help than the Demon, Etrigan himself. And where there’s demons, there’s also a Deadman, a Spectre, an Enchantress and a host of other supernatural friends and foes—it’s a veritable Grand Guignol!

In my review of Batman: Damned #1, I said don’t worry about it if the issue didn’t make sense. Well, don’t listen to me, because I don’t know what the hell is going on.

Issue/book #2 is more confusing than the last, and kind of answered one of the many questions I had before. Warning: minor spoilers ahead.

Someone has defiled Jesus on a cross inside of a church, and all signs point to the Joker. But as we’ve been figuring out, the Clown Prince is supposed to be dead. Alongside Constantine, the Dark Knight continues on this supernatural crusade to find out who is really dead, and who is alive. In addition to that, he’s encountering Enchantress, Etrigan, and Mistah J’s lover, Harley Quinn. We also get a tease that something may be crossing over from the other side.

Let’s get the negatives out of the way first. While trying to get inside the mind of Brian Azzarello, I quickly reminded myself of Bob Uecker in Major League II:

“He must be thinking….I don’t know WHAT the hell he’s thinking.”

I usually give writers benefit of the doubt, and reserve judgment until their story is finished. Azzarello is known for dark, complex, and controversial writing. So it’s in my best interest to wait until this story finishes to give a grade. But here, I’m having trouble following what Constantine is talking about, how it connects to Batman, and what exactly is the point of all this? “Is the Joker really dead” is a good enough story, but it seems so minimal in these two books and isn’t the central focus. That’s fine too, but what is the central focus then?

Also, Enchantress is about as confusing as this plot. She showed up last issue, speaking incoherently, and follows it up here with more award-winning dialogue: “Bruce be dead. My tearless.” Yeah, well I bored. You dumb.

And finally, I don’t like this darkness he’s put upon the Waynes. This is a total “Ryan sensibility” thing, but I’ve always loved that Thomas and Martha Wayne were the only 100% pureness in Gotham. They were honestly great people, and that’s what makes their murders so heartbreaking. Azzarello is dipping them in darkness, especially Thomas. I don’t like it. If he becomes an ass, why would I care that he was shot and killed?

Whew, anger is over. Now the positive. I hate Etrigan. Never liked him, found him annoying. However here, there’s a cool twist with him: he’s a rapper! So all of his rhyming (which I gloss over every time in a comic), is actually part of him singing, and I was into it. FINALLY, someone cracked the Etrigan code, and I’m on board.

Lee Bermejo is the finest DC artist there is. I’m not arguing. There were many panels in this issue that I thought were real. No hyperbole. The attention to detail is second to none, the emotions on each face are exceptional, and each setting is a perfect reincarnation of a 1980’s New York City. Gotham is a dirty, dirty place….yet Bermejo makes it beautiful.

Batman: Damned #2 is a frustrating read. The plot isn’t clear. I didn’t remember until halfway through what the premise was, but that doesn’t really matter. However, there’s still enough good going on between character interactions, that I’m definitely sticking it out. Oh, and Bermejo’s art is worth the $6.99 alone. I’m putting my faith in this creative team that they’re going to stick the landing when book #3 comes out early next year.

Black Label note: there’s plenty of f-bombs, but not a “batpole” to be found. – Ryan Lower